On Tuesday, November 30, 2010, the FCC adopted a Notice of Proposed Rulemaking (NPRM) that seeks comment on three proposals intended as initial steps to recover broadcast TV spectrum for use by new wireless broadband services.

The NPRM says that the FCC is faced with an opportunity to provide more flexibility and greater efficiency in use of the UHF and VHF TV bands and that it is offering these proposals in order to ensure that the spectrum is being used as efficiently and effectively as possible, whether in terms of bandwidth or data capacity. The NPRM states:

“…television broadcasting in this country provides for a data rate of 19.4 mbps, that data rate is fixed irrespective of whether it is actually being used for transmission of television programming or other services such that at times a TV channel is essentially idle. For example, if a TV station transmits an HD program that uses an average of 10 mbps and one additional 2.5 mbps video program, approximately 7 mbps of the stations available capacity/bandwidth would be unused. Any applications that use a portion of the capacity of a television signal are constrained to the ATSC transmission system and do not have the option of a radiofrequency return path in the same spectrum.“

First, the NPRM proposes to add a “FIXED/MOBILE” allocation to all the TV bands (excluding channel 37). This would allow fixed and mobile wireless broadband services to be co-primary with broadcast TV. The NPRM also states that broadcast television stations and other primary services operating on the spectrum to be recovered will be protected from interference from new broadband services for as long as they remain on channels in that spectrum.

The second proposal explores enabling TV stations to voluntarily combine their operations and programming on a single TV channel (Channel Sharing). Shared channels may continue to employ multicasting or mobile services but, the FCC proposes to require that all stations utilizing a shared channel retain at least enough spectrum (bandwidth) to operate one SD channel. Each station on a Shared Channel will continue to be licensed separately, have its own call sign and be separately subject to all of the Commission’s obligations, rules and policies. Each station’s programming obligations will remain the same (e.g., children’s programming, political broadcasting, EAS, indecency) and a station will not be responsible for the programming or violations of any other station sharing its channel. In addition, stations sharing a channel will retain their cable and satellite carriage rights. 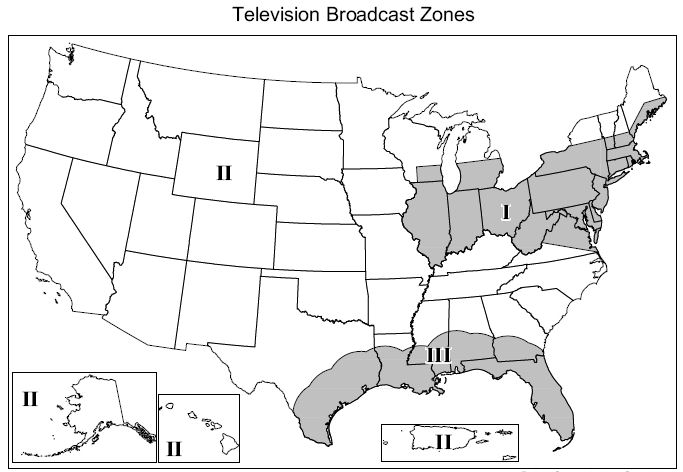 Finally, the NPRM seeks comment on steps that would improve indoor TV reception in the VHF bands (channels 2 – 13), such as by increasing transmitting power and establishing minimum performance standards for indoor antennas. Specifically, the FCC proposes to allow VHF stations in TV Zone I to effectively increase their maximum ERP by 6 dB to 40 kW for low-VHF stations, 120 kW for high-VHF stations. In addition, the NPRM seeks comment on a proposal to adopt performance standards for indoor consumer receive antennas by requiring that they comply with the industry standards in ANSI/CEA-2032-A which provides that antennas have a measured gain that exceeds: