The headline above was as surprising to me as it might be to you. Here’s the story. 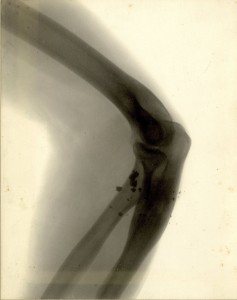 The first published information about x-rays, Wilhelm Röntgen’s “Über eine neue Art von Strahlen” (“About a new kind of rays”), was submitted on December 28, 1895. By April of the following year Dr. Ernest Amory Codman had already been qualified in a Boston court as an “Expert in X-ray.” At right is an X-ray image he took of Henry Pickering Bowditch’s elbow at around that time. It shows bullet fragments from a shot that hit Bowditch in the forearm during the U.S. Civil War.

Bowditch was a physiologist who ran the lab where Codman worked. He was also the father of Codman’s future wife, Katherine, a promoter of birth control and women’s suffrage.

As for Codman, he worked on X-rays at Massachusetts General Hospital, where he eventually compiled an X-ray atlas of the human body.  But that wasn’t the only hospital where he worked. 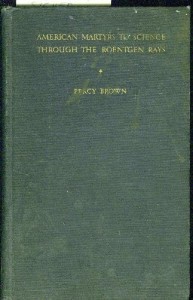 Codman was the first “skiagrapher” (shadow printer, what we’d today call a radiologist) at Boston Children’s Hospital. He was succeeded by Dr. Percy Emerson Brown, author of the headline above. Dr. Brown established what was then called the Department of Roentgenology there. He became president of the American Roentgen Ray Society and is probably most famous for the book American Martyrs to Science through the Roentgen Rays. Brown, himself, suffered some amputations as a result of his X-ray work.

So, did a disgruntled Dr. Brown refuse to make radiological images unless he got opera tickets? Was he so upset that he swore off both opera and radiology? No, it was more basic. An x-ray tube requires electricity, something opera houses had before there were power companies. 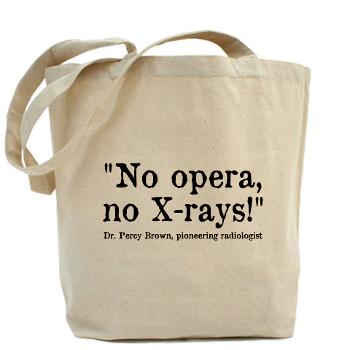 The story of why opera houses had their own electric generators deserves its own post, and, when you read it, you might never look at a candle the same way ever again. In the meantime, if you, like me, think “No opera, no X-rays!” makes a great slogan, check out this shop: http://www.cafepress.com/no_opera_no_x_rays