Findings included in the interim edition of the Ericsson Mobility Report reveal the top five apps in a given country dominate in terms of mobile traffic generated on smart devices. In the countries illustrated in the report – the US, South Korea, and Spain – they account for around two-thirds of all app traffic over mobile networks, which reflects a global trend.

Alongside this, video streaming and social networking prove by far the most popular apps in each country. Despite clear general trends, each nation displays its own unique preferences – for example, in December 2014, the US top three included Netflix and YouTube, while South Korea was notable for peer-to-peer TV app AfreecaTV and home-grown search portal NAVER. Facebook was the number one app in each country studied. 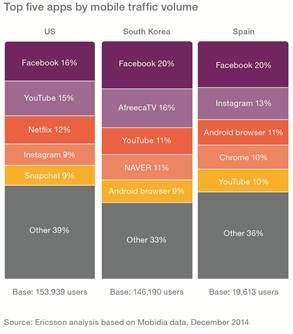 Fourth quarter figures for uptake of different mobile standards show that, for the first time, LTE technology achieved the highest quarterly additions, with 110 million new mobile subscriptions. Other standards listed in the report include HSPA and GSM/EDGE, amongst others. Alongside this, full year figures for 2014 show that 800 million smartphone subscriptions were added worldwide taking the total number to 2.7 billion, up 40% from a total of 1.9 billion smartphone subscriptions in 2013.A further finding from the report is that mobile video dominates traffic growth and is forecast to grow by around 45 percent annually through to 2020. Over the next six years, total mobile video traffic will grow 17 times more than it did in the last six years. Prominent factors driving this rapid growth include increased number of video-enabled devices, larger screens, and better picture quality. Another prominent driver is that video is becoming an increasing part of online content, such as news, adverts, and social media. Video is increasingly shared via popular social sites, such as Twitter.

Findings from the report reflect a decline in the numbers watching broadcast TV, and an increase in those enjoying streaming services. Having studied nine key markets around the world, Ericsson ConsumerLab has identified a shift in consumer viewing behavior when measuring frequency of viewing: this year for the first time more people will watch streamed on demand video than broadcast TV over a weekly period in those markets. Drivers for this change include the advent of 4G technology, the growth in smartphone and tablet usage, and a shift in consumer behavior towards easy-to-use, on-demand services that offer cross-platform access to content.

Full editions of the Ericsson Mobility Report are published twice a year, this interim update has been created ahead of Mobile World Congress in Barcelona (March 2-5).

All Ericsson Mobility Report findings and Ericsson’s Traffic Exploration Tool can be found at: www.ericsson.com/ericsson-mobility-report

During Mobile World Congress 2015 in Barcelona, Spain, Ericsson is showing world-leading technology, service capabilities, and innovations. The Networked Society is transforming entire industries. ICT tools have become fundamental everyday resources for businesses, people and society. We lead the way with hardware, services and software solutions that drive development in mobility, broadband and cloud, creating the foundation for new eco-systems, and transformation across industries. The change that transformation brings is in the hands of everyone. That is why we at Mobile World Congress this year will talk about how we enable change-makers in the Networked Society to advance digital experiences.

You can find us at MWC in Hall 2, Stand 2N60. Follow us during the event using @Ericsson and join the discussion using #MWC15. Insights from our experts and Networked Society evangelists are also published on our blog during the event.