Roughly since the beginning of the world wide web, I’ve had a money-making idea. I’d make a nice web site and ask people to send me money. That’s all. No purpose listed, no return implied.

I’m not in a position to offer a proper opinion, but I think it would be legal, as long as I paid any related taxes and business fees. I freely offer my idea to anyone who wants to try it. 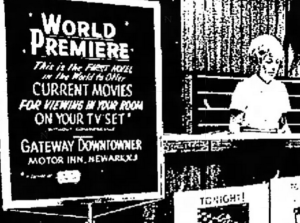 Back in 1971, at the beginning of the current era of in-room movies, I worked for one of the pioneering companies in the field, Computer Television. We had some problems with our initial computer systems correctly recognizing orders for movies, so, while we worked on the challenge, we instructed hotel front-desk staff to quickly and cheerfully refund the movie fees to any guests who asked.

We had fewer refund requests than we expected. Our marketing director, therefore, speculated on an efficient business model: Charge all hotel guests a fee, and quickly and cheerfully refund it to anyone who asks. No equipment or services would be involved. The hotel might even get kudos for its excellent customer service.

Unfortunately, by taking money from the non-complaining guests involuntarily, that “business” would be theft. It was just an amusing thought experiment for us; we never seriously considered it.

The copyright claims being made to YouTube for expired or non-existent ownership, which I wrote about in my earlier post Copywrong, however, seem to be an updated version of the hotel-fee idea. Companies, some of them large and “reputable,” claim ownership of century-old (or even older) content for which the rights have expired or never existed. Multiple companies claim ownership of the same content. They get YouTube to send them money for their claims, but they quickly and cheerfully back down when challenged.

I think the official term for what’s going on is “digital rights management.” See the headline of this post for another option.