Major League Baseball’s top executives were on hand at CES to announce a three-year deal with Le Sports that will result in the Chinese-based Internet company to stream 96 regular season MLB games next year (four live each week) plus live streaming of events like the All-Star Weekend Festivities, playoffs, and World Series. It marks the first time ever that MLB games will be streamed in China in Mandarin. 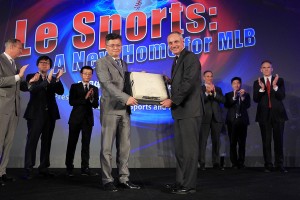 Le Sports Chairman Fei Gao presents Major League Baseball Commissioner Rob Manfred with a base that was used in the first MLB baseball exhibition game in China during the announcement of a partnership between Major League Baseball and Chinese sports network Le Sports Thursday, Jan. 6, 2016, at Caesars Palace in Las Vegas. Photo by Sam Morris

Manfred added that China is a crucial frontier for the development of baseball.

“We are at an inflection point in China,” he said. “First with a Chinese player being drafted this year by the Baltimore Orioles and now, at long last, a great media partner.”

And Chris Park, MLB, SVP of Growth Strategy and International, added that the new deal is the latest effort on the part of MLB to expand that development. For the past seven years MLB has developed player academies across China.

“It’s a model for prospect training but also for great integrated education of the sport and to open baseball to other dimensions of people’s lives,” explained Park. The University League, for example, is now in 75 top universities and colleges in Beijing and Shanghai and there is also an MLB Play Ball! program where more than 200 elementary schools have introduced 250,000 children to the game.

“And the centerpiece is a roving Roadshow Baseball Park Tour that visits 15-20 cities during the baseball season,” he added. “Last year we drew more than three million people to the tour which would be a successful number if it was done in the U.S. And every step of the way Le Sports has been with us and an invaluable partner.”

“By working with MLB in China over the past three years on events, we saw just how appealing the league is to Chinese families, and how popular the games and MLB players have become to young sports fans in China,” said Le Sports CEO Zhenjian Lei. “We are excited to expand and extend our partnership with MLB.”

Le Sports will also invest significant marketing resources and leverage its unique digital device ecosystem to promote baseball. Lei added, “We are thrilled to bring even more baseball to Chinese fans as this sport becomes so much more popular to the Chinese people.”

Le Sports Chairman Fei Gao said: “Baseball is a sport of ‘coming home,’ which matches our traditional Chinese family values perfectly. We will provide an enhanced viewing experience to Chinese fans, and encourage more families and young people to play and enjoy this amazing sport.