The Canadian sports network plans 20-plus 4K broadcasts of the Raptors, Maple Leafs, and Senators

North of the border, support for live 4K sports production is red-hot. Tomorrow night, TSN will broadcast the Toronto Raptors in 4K/UHD, launching a slate of 4K broadcasts produced wholly in Canada by Canadians.

“We are going to be the first 4K production broadcast originally produced in Canada,” says Mark Milliere, SVP, production, TSN, noting that previous 4K broadcasts in Canada had been picked up from BT Sport and distributed in Canada. “In terms of an original Canadian production produced by Canadians made in Canada, this will be the first, and we’re excited.” 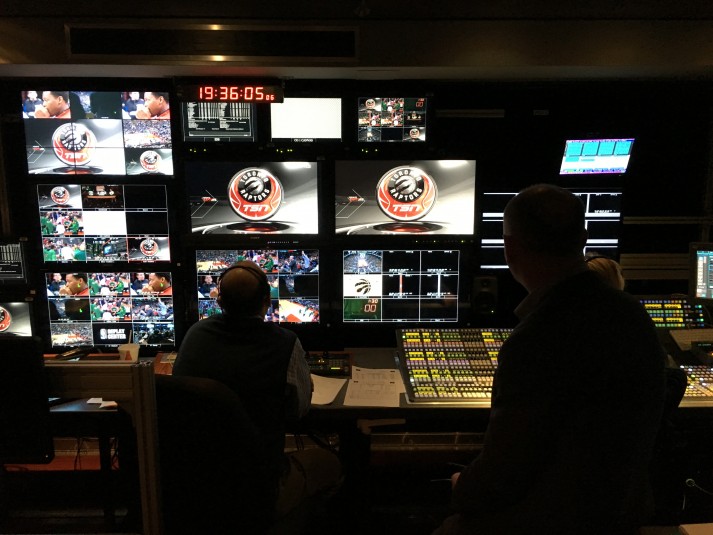 Inside the truck at TSN’s first 4K production.

TSN will embark on its 4K schedule using two Dome Productions mobile units in a side-by-side configuration. Dome’s Journey will house the game producer and director and will be responsible for cutting and producing an HD feed of the game. Unite, equipped with a Grass Valley Kayenne K-Frame 4K switcher, will be home to a 4K technical director, who will follow the HD director’s cues and cut the 4K show.

The network tested this workflow during a Toronto Maple Leafs game on Friday. Of the 20 cameras deployed, eight were Sony HDC-4300 units, which sent a 4K signal to Unite. The remaining 12 — including specialty cameras like netcams, robotics, and overhead shots — were upconverted to 4K.

Tomorrow night’s game will be the first of more than 20 planned 4K broadcasts featuring the Raptors and Maple Leafs as well as the Ottawa Senators. TSN hopes to add more broadcasts in the coming months and, potentially, CFL football this summer. Throughout the NBA and NHL seasons, the network will slowly experiment with the capabilities and advantages of 4K production.

“Right now, we’re going to produce it like a normal game,” says Milliere. “Everything’s a learning process, so we are really in the early stages of this. We will learn stuff, I’m sure, along the way on what works better, but, right now, we are producing an HD game with a 4K output. That said, there are some bonuses that you get with the 4K cameras; [for example], it allows us to add a super-slo-mo in a very cost-effective way.”

Both the HD and 4K broadcasts will be distributed by TSN’s parent company, Bell. Yesterday, Bell announced that its Fibe TV customers in Toronto, Montreal, Ottawa, and Quebec City can now purchase its new 4K Whole Home PVR. With the Bell 4K PVR and a 4K-compatible television, sports fans in those four markets will be able to enjoy TSN’s 4K productions.

The service will be able to accommodate high dynamic range (HDR) once that technology becomes available. “We’re not there yet,” says Milliere, “but we’re working with Dome to get there.”

Whether it’s the contrast of the puck on the ice, an isolated shot of a player after a basket, or the definition of the grass during a football game, Milliere believes that 4K production will significantly enhance the viewer experience.

“Anytime you get to embrace a new technology and play with it and grow with it,” he says, “that’s exciting. We certainly feel that we’re going to learn as we go.”