For the second time in two months Showtime covered a boxing match in VR, using multiple VR camera rigs to capture the action and create a 360-degree experience online.

This past Saturday, Showtime Sports took a second swing at covering a boxing match using virtual reality (VR) cameras, and, by all accounts, the effort paid off for VR and 360 viewers who were able to watch the edited fight clip on Monday.

“We didn’t do a live stream because of all the cameras,” says Ken Todd, VP of video strategy and emerging platform marketing, Showtime. “After the fight ended, we immediately stitched all of the videos and then made some quick editorial decisions so we could publish on Monday, which is a pretty fast turnaround.” 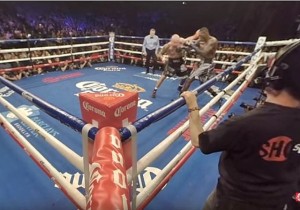 This marks the second time in two months that Showtime covered a boxing match in VR. On Dec. 8, the network used two VR camera rigs (comprising six GoPro cameras mounted in each boxer’s corner). This past weekend, a third camera was added (in one of the neutral corners) along with a 270-degree rig that captured footage around the arena and in the locker room. Also, a time-lapse camera showed the arena filling in before the fight.

Showtime worked with Austin, TX-based VR-content-creation company SubVRsive. “They are innovative and smart and have great expertise in VR composition,” says Todd.

The clip is available on the SHO Sports YouTube Channel as well as on YouTube’s Sports Channel, the YouTube 360 Channel, and Facebook. The use of Samsung Gear headset or Google Cardboard VR goggles transforms the 360 experience available without the devices into a fully immersive VR experience.

“The 360 and VR users see the same file,” Todd explains,“but one thing that is different is that Samsung Gear users will experience 360 audio as we had an ambisonic mic in the ring so that, as the viewer turns their head, they hear a different perspective.”

He adds that Showtime is looking at new opportunities for emerging platforms like VR and boxing is a natural, given that the cameras are relatively close to the action. Adding in several more cameras improved the viewer’s sense of being there, and the production team even had a moving VR rig mounted on a gyrostabilized pole.

“Movement in VR is tricky because you need to be very conscious of not making the viewer uncomfortable,” Todd points out. “We were pleased with the result as we are trying to test and learn.”

The clip available is not the entire fight but, instead, puts the focus on the boxers’ entering the ring and the ninth-round knockout.

“We have a lot of experience in short-form content, and we’re cognizant of attention spans, especially on Facebook,” says Todd. “So we wanted to create a compelling short-form piece that captures the excitement of the moment. We were fortunate that, in the first fight in December, there was a technical knockout in the first round.”

One benefit of using so many cameras in the coverage is that the promo team at Showtime can go through the footage and find compelling clips that will help promote upcoming fights.

“We’re augmenting what is on TV,” says Todd. “For example, the TV broadcast was focused on Artur Szpilka on the mat. But the VR was a step back and allowed the viewer to see Denontay Wilder dance as he walked back, and then he looked right at our camera, and you could see all the people rush up to the ring. They were right beside you. You don’t see that view in the traditional broadcast.”