NFL Network, Others Turn on The Switch for Super Bowl Network Needs

The Switch is on hand at Super Bowl 50 for a number of clients, capping a successful NFL season that saw the company extend its presence in NFL-related events, complementing it at approximately 150 sports venues and customer locations that are part of The Switch Network. It’s also giving the company a chance to roll out its FineNines Service, introduced in 2014, to Super Bowl City, courtesy of one of the company’s two service trailers, known as a POP (Point of Presence) in a Trailer. All told, the company is supporting more than 28 HD-SDI, JPEG2000, and ASI video paths and 24 data connections ranging from 50 Mbps to 10 Gbps, totaling more than 7,500 hours of video and data transport. 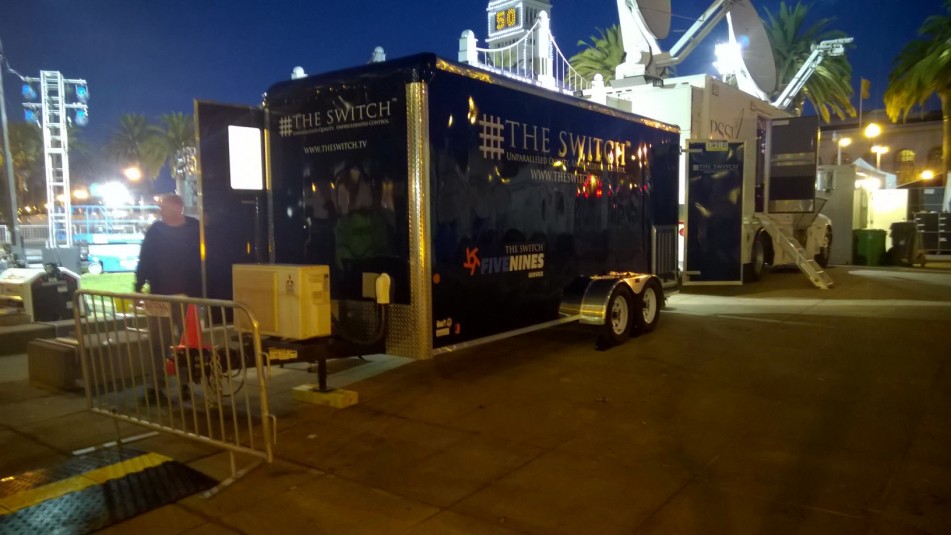 A trailer from The Switch is helping broadcasters stay connected at Super Bowl City in San Francisco.

“This is a massive bandwidth and infrastructure integration, evidenced by more than 60 Gbps of local and inter-city transport service, all fully diverse and redundant, to serve the mission-critical needs or our media clients,” says Scott Beers, chairman/CEO, The Switch. “The two trailers were introduced at the end of last year to allow a flexible way to extend the reach of our network, all consistent with our FiveNines and diverse model for service. The advantage of the trailers is that, once they are in place and connected to the network, their capabilities and features match those of one of The Switch’s fixed locations: diverse signal paths and redundant equipment.”

One of the key drivers, he adds, is the ability to support big data. The Switch built a backbone that allows clients to migrate to file-based workflows via fully diverse and low-latency transport service. That allows the client to conduct all its data business seamlessly for applications that include centralized graphics and editing, adding more value in terms of managing remote operations.

“The Switch is a trusted transmission partner of the NFL,” says Glenn Adamo, VP, media operations, NFL. “Our relationship started with a few circuits in 2013 and has grown to support extensive connectivity from every NFL venue today. The NFL’s requirements for Super Bowl 50 include video and Ethernet to enable scores of individual services. The Switch has always delivered on our needs for protected and reliable service.”

The Switch also has a presence at Moscone Center (where Radio Row is located), SAP Center, and more than nine total feed-points in the San Francisco/San Jose/Santa Clara area, including Levi’s Stadium, home of Super Bowl 50 on Sunday night.

“Under the FiveNines brand, everything is about diversity, redundancy, and protection,” says Beers. “Levi’s Stadium already had a FiveNines presence that we supplemented to meet additional service requirements.”

Moscone Center, meanwhile, has what The Switch calls a POP in a Box, portable transmission gear that can serve the large data and video needs of The Switch’s customers operating from that venue.

“The Net Insight Nimbra platform,” Beers adds, “is used within the trailer to connect to the fabric of The Switch Network and convert electrical signals to optical signals for transport of mission-critical traffic.”

The Switch’s Super Bowl operations this week exemplify the continued move toward remote production operations that connect robust onsite facilities with a production team hundreds, even thousands of miles away.

“Using a hybrid approach,” Beers says, “you can take best-of-breed remote production operations and connect them to best-of-breed centralized operations that can be leveraged. What we’re seeing,” he adds, “are clients looking for a consistent high-level production in terms of workflows, human resources, and technology resources. It’s a cost-containment opportunity that also is a production enhancement.”