In the world of live sports video, one of the most important elements of a top-notch production is a smart, slick, engaging, and captivating graphics package. 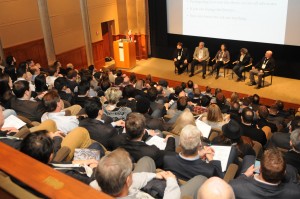 For many media companies, there’s a consistent appetite for change when it comes to branding. Whether it’s a marquee event, a new show, a new network, or simply the desire for a breath of fresh air, the opportunities are always there to undertake a complete redesign of one’s graphics package. Those total overhauls keep designers busy year-round.

A standing-room-only crowd of more than 170 attendees filled the Michael Fuchs Theater at HBO in New York City on Wednesday for SVG’s Sports Graphics Forum. Attendees were treated to a conversation between top graphics producers, who spoke to recent package makeovers they have taken part in for brands including ESPN and Monday Night Football, HBO/Showtime and the Manny Pacquiao-Floyd Mayweather fight, and more.

Prior to the start of the 2015 season, ESPN decided to bring new looks to its two largest football properties: Monday Night Football and college football. Michael “Spike” Szykowny, senior director, motion graphics, ESPN Creative Services, was handed the task of overseeing the graphics reboot of both. 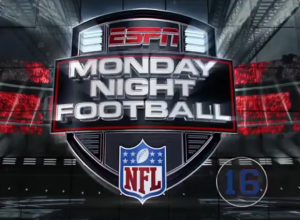 “They are both football, right? That’s really where the similarities end,” he explained. “[Monday Night Football] is a once-a-week, primetime game where you are competing in the entertainment space and trying to compete with the Sunday Night Footballs and the Thursday Night Footballs, and we need a package that brands us in that space. College football is a whole other animal; we do 30-40 college football games a week. You have all of these different production crews touching this, but you want them to be equally successful.”

One and Done With Pacquiao-Mayweather
One of the biggest sports events of 2015 saw HBO and Showtime come together to produce the much hyped Pacquiao-Mayweather showdown. Teams from both sides — along with partner Troika — were handed the unenviable task of creating one massive graphics package that would be used once and never seen again. 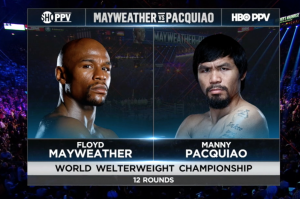 HBO and Showtime went for a simple, sleek look for its graphics package on last May’s Pacquiai-Mayweather fight.

The fight was announced less than two months prior to the ring of the bell in Las Vegas, meaning that both sides had an exceptionally small period to build from the ground up a package striking a perfect balance between HBO and Showtime branding.

“Many of us may not want to hear this, but sometimes we think it’s impossible to do something in such a short period of time,” says Camille Maratchi, associate creative director, HBO Sports. “To do something like this in a month and half? That’s crazy. The fact that we were able to do it in six weeks with the small amount of manpower that we had and the sheer effort and brainpower it took was immense.”

CBS Sports Reboots Around Super Bowl 50
The largest graphics rebrand in the past year, though, goes to CBS Sports, which revamped its entire image, from primary logo on down, to launch in coordination with Super Bowl 50.

JP Lomonaco was brought in by CBS Sports in August to serve as the company’s new senior art director. He worked closely with Gil Haslam, creative director, sports, Troika, to take on the project.

For more on the CBS rebrand, read here.

The Power of NHRA
Thanks to a new partnership with Fox Sports, the National Hot Rod Association (NHRA) has completely re-imaged its live-production outfit (read about it here and here). Along with that has come a new graphics package and presentation strategy.

The NHRA priority was better storytelling at the heart of the graphics rebrand, integrating live data, visuals specific to the sport, and such visual cues as adding the digital start and finish lines developed in partnership with Sportvision.

“NASCAR cars generate 1,200 horsepower of inertia per vehicle, and one NHRA vehicle is 10,000 horsepower,” noted Mike Rokosa, technology executive, NHRA. “Standing alongside our starting line and [seeing] one of those cars go off is an experience. I believe we have done a pretty good job of conveying the power of our sport [in our graphics package].”