Opening Day is nigh, and ESPN is set to throw the first pitch on the 2016 MLB season like never before, providing a record seven live game telecasts in two days. April 3 and 4 will feature the Opening Day games for all 10 2015 MLB Postseason teams, with a Sunday tripleheader culminating in a primetime World Series rematch between the Kansas City Royals and New York Mets.

“Our responsibility is to create a sense that Sunday is now a standalone day for baseball,” says ESPN Coordinating Producer Phil Orlins. “Monday openers have always been and will continue to be great, but [on Sunday] you have every team playing and then the NCAA National Championship at night, so we have a chance to own Sunday with no other games airing in those time windows. People are just hungry for baseball, and it’s going to be an unprecedented opportunity to open the season.”

The Opening Day(s) marathon will kick off a season that will see the return of technical advances launched last year, including the debut of NEP’s state-of-the-art EN2 mobile unit, first deployment of Sony HDC4300 4K/high-speed cameras, and use of a Sportvision K-Zone virtual graphic on every pitch. For this season, ESPN has added a 4K Phantom Cam with an Evertz DreamCatcher production/replay system to Sunday Night Baseball and plans to test a new at-home/REMI (remote-integration) graphics-production workflow for approximately 10 games, with operators located at the ESPN broadcast center in Bristol, CT, rather than onsite.

The big news around ESPN’s marquee MLB property, Sunday Night Baseball, is the debut of a new broadcast booth featuring newcomers Jessica Mendoza (the first female MLB game analyst) and Aaron Boone alongside returning play-by-play voice Dan Shulman and reporter Buster Olney. However, the booth won’t be the only new component to SNB: ESPN will deploy a Phantom 4K ultra-high-speed camera integrated with an Evertz DreamCatcher to deliver extreme-slow-motion replays with digital-zoom capability on close plays. The 4K Phantom will be positioned low near the first-base dugout. 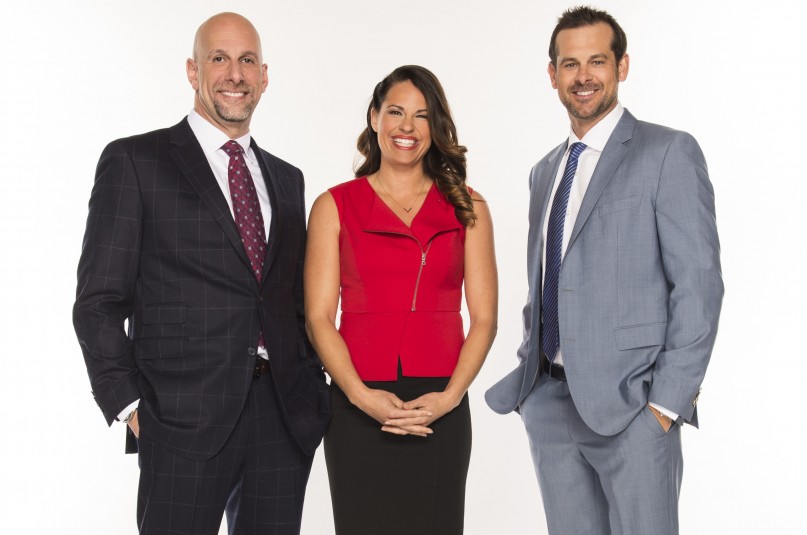 SNB will be heavy on high-speed this year, with a trio of Sony HDC4300 cameras back in the mix as well.

NEP’s EN2 will provide a powerful technological punch without a sprawling footprint for the SNB crew, which often finds itself in a crowded compound with RSN production trucks.

“We couldn’t be happier with [EN2] and are excited for another year with it,” says Terry Brady, director, remote operations, ESPN. “It can be a little crowded on our set day with other trucks doing their regional broadcasts, so it was designed exactly for what we needed to do.”

In addition to the sizable SNB complement, ESPN has permanently added a Sony HDC4300 camera to its Monday Night Baseball package (which has NEP’s NCP10 as its primary truck) after having a high-speed option only on a game-to-game basis last year.

ESPN has controlled its ART (Advanced Replay Tool) virtual-telestrator operations from Bristol via IP for multiple years, but the network is looking to take this at-home graphics-production workflow one step further this season. On April 6, ESPN will conduct a test in which graphics servers are onsite in the truck but graphics-insertion (including scorebug and Vizrt inserts) is controlled remotely from Bristol. This will be the first of approximately 10 tests ESPN will conduct throughout the season, according to Orlins, to determine the workflow’s long-term viability.

“It’s safe to say we are looking at hybrid REMI/remote combinations,” he says. “I don’t look at REMI as a black-and-white thing; there are gray areas where different pieces of shows or different approaches can be taken. I remain very intrigued by the possibilities of controlling certain operations remotely without necessarily discretely feeding everything back.”

K-Zone on Every Pitch: Year 2
ESPN went all-in on K-Zone last year, for the first time displaying the live pitch-tracking graphic over the plate for every pitch in every game. Based on Sportsvision’s PitchF/X system, K-Zone had been a part of ESPN’s telecasts since 2011, but its constant presence last season proved divisive, yielding both positive and negative reviews. According to Orlins, ESPN remains committed to K-Zone on every pitch and will continue to evolve the K-Zone graphic this year with a slightly subtler look.

“We have made some design changes in the live K-Zone — nothing extraordinary, but we went to a look that won’t have the yellow crosshair lines anymore,” he says. “It’s a little cleaner and subtler. It may seem like a contradiction to be pushing subtlety for a graphic that is on the screen for 200-plus pitches a game, but we try to make it as seamlessly integrated as possible so that it feels natural.”

Revamping Contribution, Transmission Scheme
ESPN is also changing its transmission/contribution scheme this season, delivering its primary feed from MLB ballparks via JPEG2000 fiber paths (3 in/3 out at 600 Mbps). In addition, supplemental data for file-transfer, graphics, comms, and corporate needs will rely on a 1-Gbps path. ESPN has also opted to use IP delivery for its backup path rather than a satellite uplink as in years past, relying instead on a 100-Mbps AT&T path and TVU Networks cellular-bonding transmission for its redundant feed.

“This is becoming more standard, and it’s been very successful for Monday Night Football,” says Brady. “There are a lot of reasons for it technically and financially, but we think it’s definitely the way to go at this point and what we plan to do going forward.”

Thinking Outside the Traditional Ballpark Box
Fresh off one of the most memorable MLB spring-training telecasts ever — from Havana last week — ESPN will continue the trend throughout the season, with MLB telecasts of a Pirates-Marlins game on Roberto Clemente Day at Hiram Bithorn Stadium in San Juan, PR, on May 31 and an Independence Day-flavored Braves-Marlins game from Fort Bragg, NC, on July 3.

“We really appreciate that, when baseball has unique opportunities, they look to us to produce them and amplify them to baseball fans across the country,” says Orlins. “These are tent-pole events for baseball, so for us to be able to work hand in hand with baseball to bring these events to a national audience is an amazing opportunity.”

ESPN will also bring back several of the telecast formats introduced last year: four “Sunday From the Seats” (broadcasters call the games from locations throughout the ballpark rather than the booth), “Global Games” (focused on baseball’s cultural impact in a specific region of the world), and “The Shift” (with commentators placed throughout the ballpark to provide perspective from position players’ standpoint).

Baseball Tonight will also be onsite several times throughout the season (as well as the College and Little League World Series), including in Kansas City for Sunday’s Opening Day primetime game.