Last September, Dome Productions learned that it would need to figure out a way to facilitate UHD production of all Toronto Blue Jays games: Rogers Cable was preparing to launch a UHD service for subscribers. At the time, the timetable seemed aggressive but doable with the first home game on April 8, seven months away.

But a funny thing happened on the way to Opening Day: Rogers Sportsnet decided that it wanted to take UHD on-air earlier with coverage of the Toronto Maple Leafs, and then-competitor TSN decided to broadcast the Toronto Raptors in UHD on Jan. 21.

“Our yearly plan changed dramatically,” says Mike Johnson, director of engineering, Dome Productions, “and, by the time we got to Opening Day, we had already done 40 UHD events.”

On April 8, those 40 UHD events paid off for Dome Productions and Rogers Sportsnet as the Toronto Blue Jays began their 2016 home campaign. And a new era in sports production began: Dome Productions was able to use a single production unit, Trillium, to do one UHD production that ultimately was served out to both HD and UHD viewers. 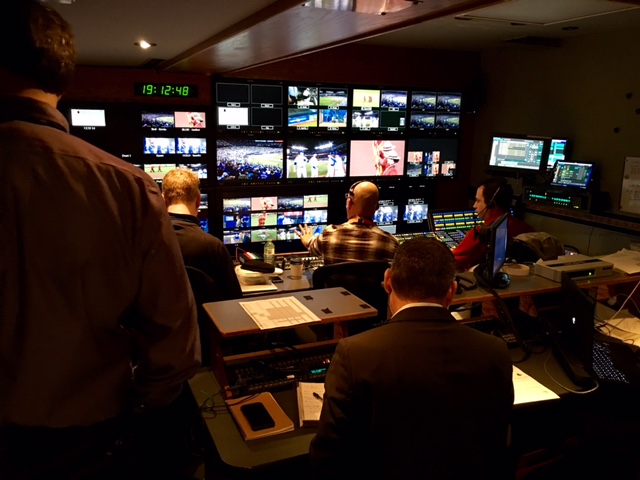 The UHD Sportsnet feed is produced out of Trillium’s B unit, which is tethered to the A unit, which produces the HD feed.

“Our target was to produce the games in 4K and then downconvert to HD,” says Johnson. “We wanted the production to be as true as it could be to the original HD production.”

Dome Productions hit that target, thanks to a lot of teamwork and planning by its engineering and production teams as well as outside vendors.

“Am I surprised we got here?” says Mary Ellen Carlyle, SVP/GM, Dome Productions. “No. We were nervous in January, but we had the opportunity to get 40 games under our belt, learn a lot, and took it in. And the suppliers have been great and really engaged with us.”

The overhauled Trillium features a Grass Valley Kayenne switcher and Trinix router and Sony HDC4300 HD/4K cameras. It maintains its original HD core in the A unit and is tethered to the B unit for UHD productions. The B unit houses a large UHD baseband router, as well as the Grass Valley K-Frame infrastructure for the Kayenne switcher and the replay-system infrastructure.

“We are basically adding a UHD core layer to an existing truck,” Johnson explains. “We can control the router and service the replay channels to feed to the stations in the A unit, so the heavy lifting of 4K all takes place in the B unit. In terms of connecting it to the A unit, we just have to tie into the operator-station links. There are multiviewer video displays and audio monitoring, and that will all link through fiber interconnects to the B unit and will control the devices.”

An important factor in the entire endeavor is the number of cameras used for Blue Jays games. “Our requirement for hockey is upwards of 25 camera sources, but baseball is not like that: there are only 10 or 11 cameras,” says Johnson. “And we can do the instant-replay operations with only six people.”

Six of the Sony HDC4300 cameras are being used in 4K mode and are manned; a seventh is in use as a 4K robotic POV. There are also four HD cameras that are upconverted: two Sony HDC4300 units operating in high-frame-rate mode and two Q-ball cameras in the dugouts. The HD cameras are currently in 1080i, but the goal is to eventually make them 1080p, a move that will improve upconversion quality.

According to Johnson, the technical directors required a lot of training, having to learn to make do with fewer key layering capabilities and fewer mix effects. The Grass Valley production switcher was arranged so that a portion of the panel and switcher not used for the HD show was dedicated to the UHD production.

“The result was like having two separate switchers that were linked together by GPI,” says Johnson. “So the TD could expand on the layering capability and meet the challenge of creating multiple boxes.”

In terms of playback, one 12-channel EVS server handles the two high-frame-rate cameras; five EVS machines are in 4K mode. Two of these are operating with one input and two outputs, and the other three are two inputs and one output. Getting to that point required the engineering and production team to work closely together to figure out a workflow.

“Then they had to bring in the operators,” says Carlyle. “If they didn’t do that prep work to figure out a workflow, the project would not have come off as well we it did. The group was great as everyone got together and worked around the issues.”

Johnson notes that getting to that point required convincing a few naysayers and helping them adapt to a different workflow. “Even when we were doing the basketball games,” he points out, “the EVS operators were clipping and moving clips from one EVS to another at the volume of traffic there would be for an MLB game.”

The work is still not completed: the team is now figuring out how high dynamic range (HDR) fits in. For now, though, Dome and Rogers Sportsnet have staked their claim with respect to UHD production.

“If we get to UHD, we become the leaders. If we don’t, then we’re the followers,” says Carlyle. “It doesn’t matter how many are watching today. It’s about how many will be watching tomorrow.”