Day 2 coverage is underway at Oakmont

Fox Sports officially teed up Year 2 of its U.S. Open coverage, and a wet and soggy start to the event hasn’t dampened the spirits of a production team ready to deliver for golf fans across the U.S., even though, on Day 1, only about three hours of golf were played because of thunderstorms.

“I’m extremely happy with how everything went yesterday,” says Brad Cheney, director, engineering and technical operations, Fox Sports. “You plan for it to go a certain way, and we expected to get through the first round. But the storms came in earlier than we thought, and they just kept coming. But the team did an amazing job getting on-air, and the production team did the rain dance for hours upon hours. And now the course is drying quickly.” 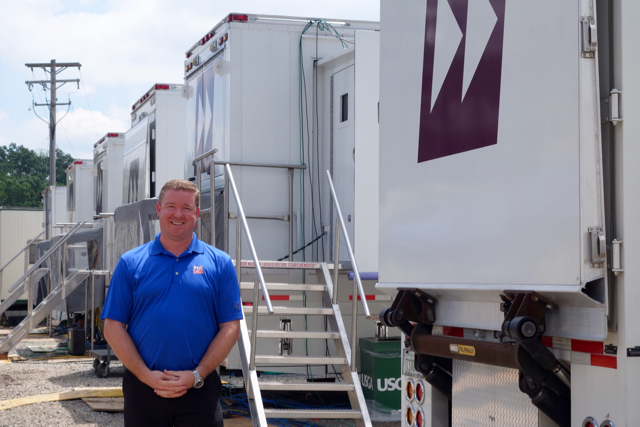 Brad Cheney of Fox Sports outside the Game Creek Encore production unit, which is at the center of U.S. Open golf coverage

Year 2 of any event incorporates plenty of changes: the team has a chance to reflect on what worked and what didn’t. For Fox Sports, such reflection was doubled because it was not only a new event but also the first time the network had broadcast a golf major. So everything was up for review.

“We made strategic choices about what worked and what didn’t work. We took the stuff that worked really well and spent time developing the technologies to make them easier to use and put out in the field,” says Cheney. “[Fox Sports USGA Studio and Event Production Coordinating Producer] Mark Loomis put it best: ‘Throughout last season, we made about 1,000 changes, some little and some big.’ But during that process, we figured out ways to become more efficient and better prepared for all scenarios.”

Adds Mike Davies, SVP of field and technical operations, Fox Sports, “The mood is more calm, and we’re confident in what we’re doing, as we have a bunch of golf events under our belt. We had a healthy measure of skepticism of what was working and wasn’t working last year, and, even as we are going through it now, we’re making notes about what we will do different next year.”

Among last year’s enhancements that are back and improved are the ProTracer systems, microphones in the holes, and the Hawk-Eye green-shading system. Only two enhancements have not returned: the live drone (impossible given the course layout and FAA regulations but used for prerecorded pieces) and the RC Car camera.

“They went away because there is no way to use them properly on this course,” says Cheney. “A lot of the reductions came about based on the course setup.”

He adds that teams from Fox, ProTracer, and CP Communications (which also fibered the course) spent a lot of time working to make the technology more easily deployable across the course.

“We have three RF versions of ProTracer, so we’re excited about it as it is the kind of thing that really helps at a U.S. Open. [RF] allows us to put it on the fairways and approaches, and [with] yardage posts [inserted], the viewer can see where the trace is going and what the player was aiming for from the fairway.” 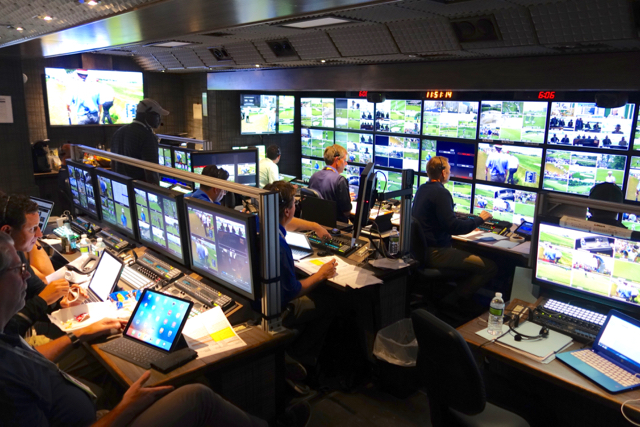 The Hawk-Eye green-shading graphics have also been expanded and will be used on nine greens. The system takes green mapping to a new level, easily making undulations visible.

“It shows off the fall and roll zones,” notes Cheney.

If you’re looking to see all of the bells and whistles, the hole to watch is 17, one of the course’s signatures. The short par-four plays uphill, and technologies like ProTracer (with reverse tracers looking back down the fairway), TrackMan, TowerCam, a TeeCam, and even two BunkerCams will all be at the disposal of Fox Sports USGA Director Steve Beim and Loomis.

Game Creek’s Encore production unit is once again onsite for the core coverage, and its Pride is onsite for support, Glory for 4K and featured-hole coverage (the 4K coverage is available via DirecTV), and Edit 2 for postproduction, with systems provided by CMSI. Caterpillar is providing a UPS for power (during last year’s U.S. Open, that system was in Vancouver for Women’s World Cup), and Bexel’s BBS1 is on hand for iso audio. BSI is managing the RF cameras, and Fletcher is providing robotic cameras around the course.

The iso-audio area in BBS1 will be able to take advantage of an improved hole mic designed by Fox, Professional Wireless, and the USGA.

The three entities developed three prototypes during the past year. “We changed the mic and also adjusted its location in the cup to help pick up the sounds better,” says Cheney. “We also improved the battery life, which is now shockingly longer than previously.”

Davies adds that the result is a cup that is a regulation cup, which makes it easier for hole cutters to accommodate the mic; last year’s system required them to punch out a deeper hole.

The team worked hard to limit the number of technical resources required this year, and one important move was to leverage the Big 10 Network, which is located in Chicago.

“We have 30 feeds going back to Chicago so they can produce the feeds,” says Cheney. “Also, the studio show is being produced out of Encore, and that is saving us a of setup, along with giving them access to all the resources we have.”

But, even without having a separate production unit for the studio show and another for the featured-group feeds, he adds, the remote facilities are more robust than last year’s: “We found some better ways to use equipment and concentrate on making it a great show.”

The first technical-team member arrived on June 1; the first large group of personnel, by June 6. On June 11, the majority of the rest of the team came in.

“Working with the Big 10 is really big,” Cheney notes. “It gives us the ability to grow and add layers without adding space and infrastructure.”

Day 2 is under way (with round two beginning on Friday afternoon), with a weather forecast that calls for clear skies.