NEP Group is once again at the U.S. Open in its traditional role of providing the mobile units for the international broadcasters and the world feed as well overseeing truck compound layout and design. “The broadcast has changed quite a bit since the last time the U.S. Open was held here and the challenges are looking at aerial photos and then making quick surveys as the size of the compound shrinks,” says Dan Johnson, NEP Group, technical manager. “And this is a lot of work and toil while the event is going on but everyone pulls together, makes it work, and the USGA is a great partner.” 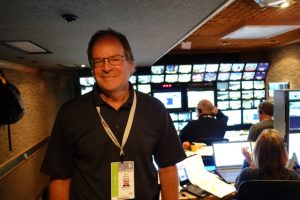 Dan Johnson of NEP Group laid out the broadcast compound for the 2016 U.S. Open Championship.

The mud appears to be drying up which should help on move out with all of the international trucks expected to leave the compound on Sunday night (lack of a playoff and weather permitting) to make room for the other equipment and trailers to be out by Tuesday.

This about as close as NEP Group will be to having a major event in its backyard as the NEP Group headquarters is located a mile away from the course.

“Thankfully we haven’t made too many trips,” says Johnson. Part of that reason is, of course, that the NEP contingent of production facilities at the U.S. Open are designed to operate just fine thousands of miles from home. Approximately 12 NEP Group staffers are on site overseeing facilities on site that include NEP Iridium handling the world feed; Chromium handling Sky Sports; NCP IV as the home for TV Asahi; and Zinc being used by the USGA for archiving. NEP’s ESU unit is also on site to handle signal transport between the various facilities and the Game Creek trucks which are being used by Fox Sports. NEP is also supporting the Golf Channel that is calling NEP 22 home for the week. 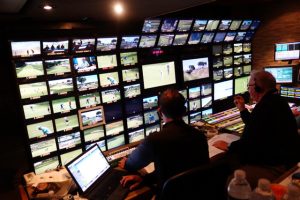 NEP Group’s Iridium is handling the world feed production of the U.S. Open.

The world feed is always a bit of a tricky production as it can take a lot of coordination with the U.S. broadcaster to ensure sponsored elements and music are cut out of the feed available to international rights holders.

“Last year there was a lot of back and forth with Fox Sports as we were figuring out what would work and what wouldn’t but this year everyone came prepared and things are working right out of the box,” adds Johnson.

This year’s production has finally settled in after a rainy start on Thursday and one thing is for certain: golf fans around the world are in store for plenty of action on the closing day as it looks like play is set to start bright and early to finish up the third round.