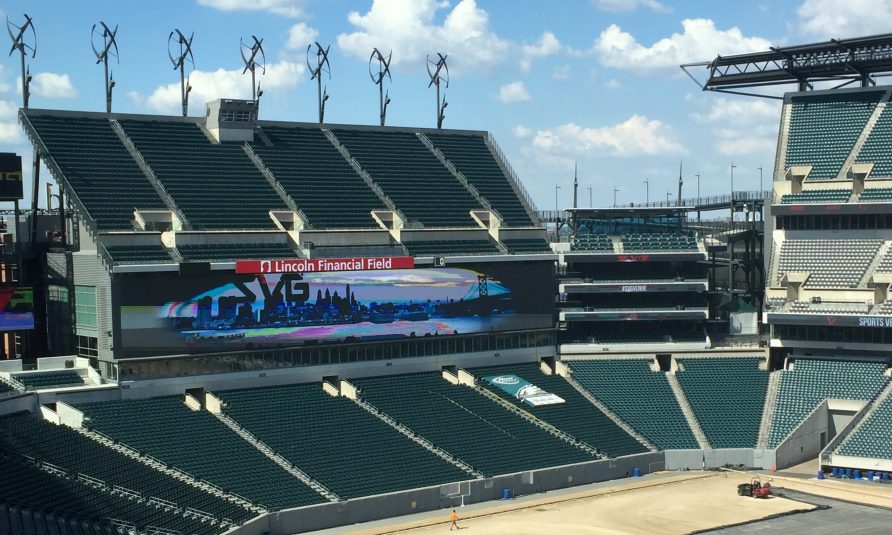 SVG’s annual venue-production event spotlighted the latest in game-day production philosophies and workflows, fan-engagement strategies, asset-management systems, and more. The two-day event – a first for the Sports Venue Production Summit – also gave the Eagles plenty of opportunity to show off the recent renovation of their video control room, upgraded video displays, and new fan-entertainment areas with a behind-the-scenes tour and special video presentation on Wednesday night and an in-depth team presentation on Thursday morning.

“We’re fortunate enough to have ownership that really buys into the importance of a high level of quality in our game-day production,” said Philadelphia Eagles Director of Production Eric Long during the team’s Thursday morning presentation. “From a fan experience standpoint, we make sure we are providing the best possible experience for the fan, which is a big push league-wide. When we have an audience here in the building, we want to provide an experience that is comparable to or better than what they would experience at home. That was a driving force in why we made the decisions that we did.”

The Philadelphia Eagles officially unveiled their $125 million renovation in time for their 2014 regular-season opener. Prior to the 2014 season, the Eagles partnered with Panasonic Enterprise Solutions Group to design and install videoboards. Clocking in at 27 ft. x 192 ft. in the north end zone and 27 ft. x 160 ft. in the south, the boards feature 10-mm resolution for exceptional viewing angles from any seat in the venue, as well the ability to play out 4K content.

“With the nature of our main video boards, which sit very low in the endzone, you have fans that are, in some cases, 25 feet from the displays,” said Long. “So we knew that, because of the way the building was designed, we weren’t going to be able to go much bigger, but the viewing angles were very important. We wanted to provide high-resolution content that you could see from anywhere in the building – even if you were right on top of the boards.” 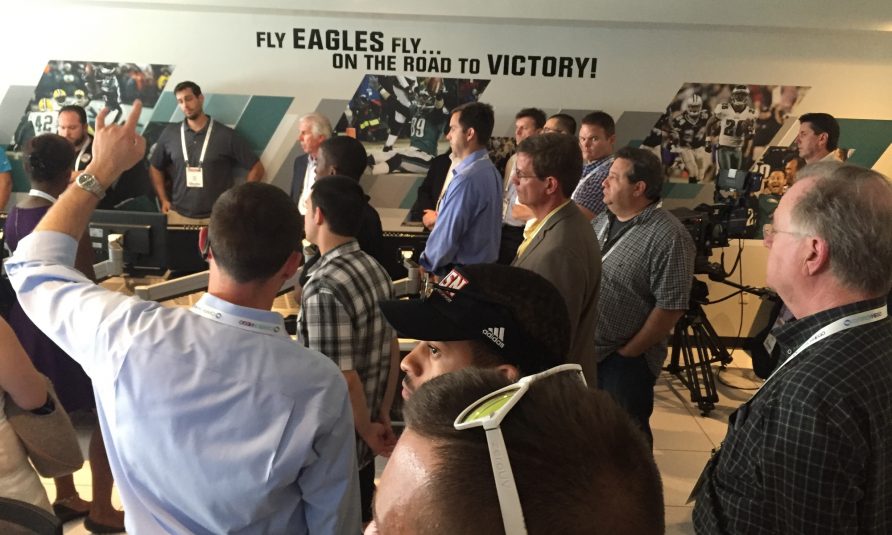 The north–end-zone videoboard measures 27 ft. tall x 192 ft. wide and the south–end-zone board 27 x 160 ft., totaling more than 9,400 sq. ft. of viewing area. Panasonic also installed several 20-mm displays, including 11 fascia-mounted ribbon boards totaling more than 2,000 ft. long, one 335-sq.-ft. display in Headhouse Plaza, and two 334-sq.-ft. and two 546-sq.-ft. marquee displays at street level outside the stadium. The Eagles Nest, located at the north end of the stadium adjacent to the north–end-zone video board, was upgraded with a 45- x 18- ft. display, a 15- x 30-ft. display, and a 390-ft. circular ribbon display. In total, the Eagles added nearly 22,000 sq. ft. of videoboards, more than tripling the venue’s previous square footage for video.

In addition, Panasonic installed 1,185 new HD TVs throughout the stadium, including concourses, club areas, and luxury suites. To synchronize content to the videoboards and TVs, the Eagles rely on a combination of systems from Click Effects (CrossFire, Blaze, and Data Hub), and rely on ChyronHego and Sportvision for its graphical look.

For each home game, the Eagles deploy 10 Sony F55s (eight hard, two handheld) and a handful of POV cameras, and can take up to 10 feeds from the broadcast network for a total of 22 to 23 camera angles per game.

“As we were going through this process, we wanted to take advantage of some of the 4K technology that was really coming to fruition as we were going through this process,” said Long. “It was important for us to [be able to] zoom and pan and scan for replay. We knew because of the wide nature of our main displays that would present some big advantages to us.”

The team also configures three Evertz DreamCatcher replay servers for 1080 in/1080 out and one for 4K in/1080i out.

“It was very important to us have an A-level, network-quality show for our fans and our ownership,” said Long. “But [because] our main video boards are a very wide aspect ratio, it makes it challenging because when networks come through here we can’t use all their angles because they are formatting for a different aspect ratio. So we had to make sure that we had a pretty robust camera complement that was going to give us great replay angles and coverage of the game.”

The control room, integrated by Sony and Diversified Systems and located on Lincoln Financial Field’s press level, also features a 3.5M/E, 80-input Sony MVS7000 switcher, Evertz 288×576 EQX video router and Magnum control system for router/multiviewer control, and VISTA Spyders. The team worked with Chesapeake Systems to install Reach Engine by Levels Beyond as their workflow automation platform at both Lincoln Financial Field and the team’s training complex and tie the two locations together.

Following the Eagles’ presentation on Thursday morning, local teams took to the stage to discuss their production philosophies, game-day workflows, and how they entertain their fans throughout the season. The day also featured an in-depth look at the growing need for asset-management and storage systems in venues, how teams are leveraging technology to tap into their fan bases throughout the year, and how local colleges like Villanova, Temple, Penn, and La Salle are satisfying the content demands of this college-basketball-crazed city.

Stay tuned for more reports from SVG’s Sports Venue Production Summit at Lincoln Financial Field, including in-depth reviews of every panel discussion and a behind-the-scenes photo gallery, next week!