NFL teams updated their rosters shortly after the Super Bowl. NBC’s Sunday Night Football has completed a more recent update. SNF, the number-one primetime show for the past five years, will sport a new theme song come Sept. 11, the season opener when the Patriots meet the Cardinals. 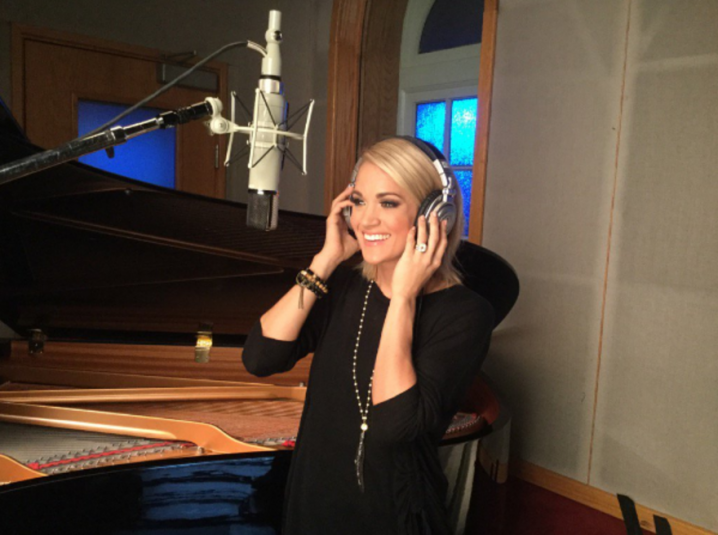 Carrie Underwood records the SNF theme song for the 2016-17 season.

Vocalist Carrie Underwood, who has sung the show’s theme for three years, is back for the 2016-17 season with “Oh, Sunday Night,” set to the music of “Somethin’ Bad,” a chart-topping duet that she performed with Miranda Lambert in 2014 and that earned a Grammy nomination for Best Country Duo/Group Performance. It continues a tradition for SNF, whose theme song from 2006 to 2015 was “Waiting All Day for Sunday Night,” set to Joan Jett’s “I Hate Myself for Loving You.” It also continues the use of pop-flavored female country singers to warble the theme: Underwood, who began her SNF run in 2014, followed Faith Hill, who sang the show’s intro starting in 2007. (Power-pop singer Pink sang the theme for one season in 2006.)

Mark Bright, who produced both songs for Underwood and has also produced Rascal Flatts, Sara Evans, and Reba McIntire, says he and co-producer Chris DeStefano, also a co-writer on the song, built a new music track from scratch, using the same approach they took with “Waiting All Day for Sunday Night”: evoking the radio hit’s sound but conforming to television’s needs.

“We did a programmed mock-up demo to show to NBC,” says Bright, who says adapting the song for SNF was Underwood’s idea. “It’s the same way we did the Joan Jett song. For both of them, we wanted a little more attitude along with the new lyrics. The drums are bigger, and there are some sound effects in there.”

That became the basis for the final version, which was recorded at Starstruck Studios on Nashville’s Music Row. The two-track final mix that came out of that session is used mainly as a reference track; the theme-song version will be broadcast in 5.1 stereo and mixed from the submixed stem tracks created by engineer Derek Bason. According to Bright, variations on the track, including bass- and drum-music-minus versions, will be used as bumpers into and out of commercial breaks. The mixes have little or no compression on them, anticipating the compression and limiting that are normally applied in broadcast. They were also mixed to conform to the -24 LKFS standard for broadcast-audio elements in surround.

Bright says all involved are big NFL fans, he and Underwood included, and he and Bason root for the Dallas Cowboys. “Working at this level,” he said, “for a show like Sunday Night Football, was a thrill and an honor.”