A look at the wide variety of sizes and functions available

Audio-mixing consoles for remote broadcast production still represent a relatively rarefied category at the high end of the market, but there’s diversity within the group, thanks to demand for consoles of different sizes and functionality. Here’s an overview of the leading contenders.

The new Brio console delivers a comprehensive feature set to support a wider breadth of broadcasters and is entirely self-contained with analog and digital I/O as well as GPIO built into the surface. A Hydra2 module can be fitted to connect to and share audio over Calrec’s Hydra2 network. This means that Hydra2’s sophisticated management facilities can be used for network-wide control, including interfacing with multiple video and audio over IP networks, such as SMPTE 2022, Dante, AES67, Ravenna, and Soundgrid. This protects the system against future formats and allows the console to sit on multiple networks simultaneously. Brio also enables connectivity to other equipment in the Calrec Bluefin2 range: the popular Apollo, Artemis, and Summa consoles. Calrec’s flagship Apollo can handle 1,020-channel processing paths, 128 program buses, 96 IFB/track outputs, and 48 auxiliaries. The Apollo control surface manages all these channels on up to 320 physical faders, and, with single- and dual-fader options, Apollo has a higher fader density within its footprint than any other console.

Based on the Apollo platform, Artemis uses the same Bluefin2 and Hydra2 core technologies. Available in three sizes, Bluefin2 provides 680-channel processing paths on Artemis Shine, 340-channel on Artemis Beam, and 240-channel on Artemis Light, with up to 128 program buses, 64 IFB/track outputs, and 32 auxiliaries. Artemis Light packs all this into a 4RU enclosure. Artemis’s integrated router means that all I/O functions can be performed by Hydra2, using high-capacity crosspoint routers and a variety of I/O units.

Also new from Calrec and designed with live sports production in mind is the ground-breaking RP1 remote-production unit. Broadcasters cannot always justify the time or expense of providing a dedicated production truck and a team of skilled operators onsite for smaller events, such as regional sports competitions. “At-home” production provides an alternative. Calrec’s RP1 engine is a 2RU core that contains integrated FPGA-based DSP, enabling a console surface at, say, a headquarters studio to control all mixing functionality. The RP1 core manages all the processing for IFB routing and remote monitor mixes, and it does so locally with no latency. This level of integration and remote control makes it simple for any remote mix engineer to set up IFB mixes and eliminate any delay for remote listeners or presenters. www.calrec.com

The S21 console features 40 flexi input channels, 16 flexi aux/subgroup buses, L-R master bus, 10×8 full processing matrix, two solo, four assignable dynamic equalizers, four assignable DiGiTuBes, four assignable multiband compressors, eight digital FX, 16 assignable graphic equalizers, optional Waves integration, 96-kHz sample rate, optional (with DMI) optics. New is the release of Stealth Core2, an upgrade to its existing Stealth digital processing. Stealth Core2 will release additional processing from the audio core of every DiGiCo SD console, taking the complete range to a new level in terms of both processing channels and functionality, and can be fitted to all existing console surfaces. This upgrade, which will be available as an option to existing users, includes a review of the application code, further future-proofing existing and new investments in DiGiCo products. The benefits of Stealth Core2 include upgraded FPGA processing power and full dynamic EQ on every channel and bus. In addition, the SD10B channel count increases from 96 to 132, all at 96 kHz; the SD9B channel count, from 48 to 96 channels of full processing at 96 kHz. The SD7B’s total number of processing strips is increased to 600, all at 96 kHz; the SD11iB’s, from 40 channel strips to 80.

DiGiCo plans a new version of the SD5, the SD5Bcs, which will offer the same specification as the current SD5B in a MADI-only format. With Stealth Core2, the SD5Bcs will come with a full complement of dynamic EQ, multiband compressors, DiGiTuBe emulators, and expanded MADI connectivity. www.digico.biz

Lawo
Lawo provides a variety of solutions for handling audio-mixing and routing tasks for broadcast sports, entertainment, and remote production. All products are IP-ready and support current and evolving industry standards for audio, video, and data interoperability. The mc² Series mixing consoles — mc²66, mc²56, dual-fader mc²56xt, and all-in-one mc236 — are offered in multiple configurations with physical console surfaces, channel capacity, and frames optimized for everything from mobiles and flypacks to large production complexes. Additions include two standalone cores: the mc2 Micro Core universal networked audio engine and the Compact Engine AES67 audio node with on-board DSP; both are able to perform all audio-mixing and routing functions under remote control and do not require localized physical fader surfaces. Stagebox I/O offerings have been expanded to support IP interfacing of analog and digital sources. In addition to the DALLIS modular frames, the company now also offers the A__line AoIP interfaces for managing analog, AES3, MADI, and Ravenna/AES67 audio connections, including functionality for remote mic pre control and operation of audio-mix functions from a distant location using a browser-based interface that can be customized for specific workflows. The world’s premier global sports events have recently deployed remote-production architectures from Lawo, including its Host Commentary System for management and control of announce feeds using standard IP networks for interconnection spanning multiple venues and countries. All of Lawo’s consoles, cores, stageboxes, control software, and Nova Series routers offer multiple configuration options with protocols supported for automation and studio/remote management applications, including Virtual Studio Manager broadcast-control and -monitoring system. www.lawo.com

SSL
System T is a new fully networked broadcast-audio–production environment, designed from the ground up to provide the power to handle large-scale productions in a multiplatform-driven future. A range of hardware and software control interfaces can be placed anywhere on a network with up to three consoles or control interfaces accessing a single or fully mirrored redundant pair of Tempest processor engines. Multiple engines can be used on a single network. Control interfaces and processing resource can be reconfigured to suit daily requirements. Routing and I/O is Dante-based, featuring Dante HC (high-channel) connectivity. SSL’s expanding Network I/O range provides SSL-audio-quality stageboxes and interfaces wherever they are required in a facility. System T has plug-and-play discoverability and interoperability as central principles.

The C10 HD PLUS is a compact, midscale broadcast console with a user-friendly interface that delivers the power of the larger C100 console in a smaller footprint. The C10’s Blackrock processor is built into the convection-cooled console control surface, suiting it to production-vehicle installation. C10 has the same range of I/O options and software features as the C100, including the production-assistant–type features designed to streamline broadcast-audio production: Dialogue Automix, 5.1 Upmix, DAW Control, and C-Play (an embedded dual-player playout system). With its range of I/O, C10 provides system-wide integration with comprehensive connectivity options; compatibility with Grass Valley, Ross, Sony, and Mosart production-automation systems; compatibility with Riedel RockNet and Optocore installed audio networks; and interfacing to Dante IP audio networks via the SSL MADI-Bridge. www.solidstatelogic.com 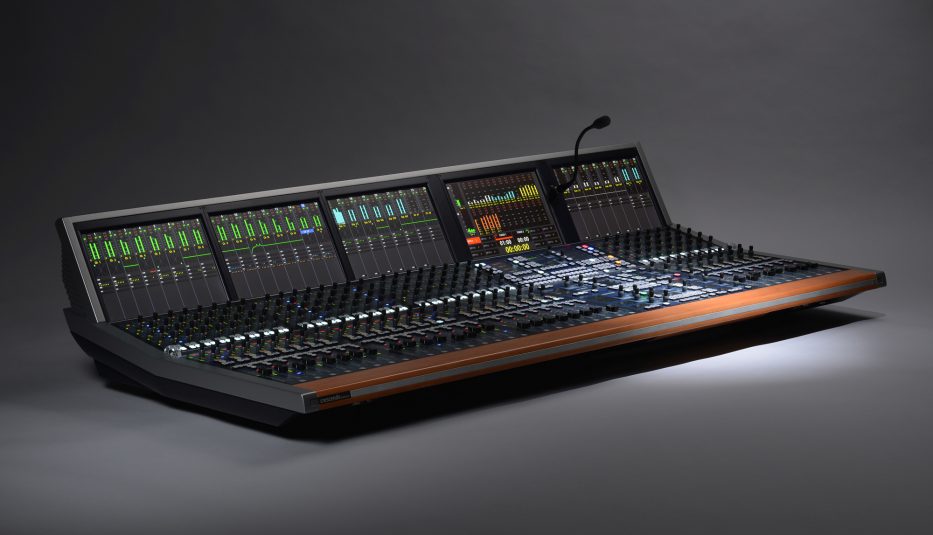 The AURUS Platinum, the flagship multiformat production console, is available in 16 to 96 faders and operates at either 48 or 96 kHz. Working in 5.1 and 7.1 surround, stereo, and mono can be done simultaneously with 5.1 on-board down/upmix capabilities and separate multiple bus configurations. The console offers fully motorized fader dynamic automation and editable snapshot and scene automation.

The CRESCENDO Platinum mixing console is a response to increased demand for a slimmed-down control surface and price but with the DSP power available in the larger AURUS when needed. All controls are within easy reach while the operator remains seated. Snapshot and scene automation is extensive with ability to set glide times between snapshots. Audio-follow-video control muting and level changes via external control are readily available through the NEXUS LOGIC system.

The ON AIR flex is Stagetec’s latest digital mixing system targeting the radio and smaller TV broadcast markets. It is a modular, flexible, and scalable system with control surfaces laid out to the broadcaster’s specification for combo, studio, or edit operation. The work surface comprises self-contained fader modules (four in each and up to 24 faders per system) and a monitor module. The browser-based GUI software runs on any PC linked via Ethernet to the controller unit mounted in the system frame. www.stagetec.com