Live From the Open Championship: ACS Takes to the Skies With CAMCAT, Develops New Railcam

Aerial Camera Systems has its busiest week ever at the 2016 Open Championship, which is being held at Royal Troon in Troon, Scotland, this weekend. Not only has the company been a key part of a golf-broadcast first — the use of a CAMCAT Colibri point-to-point cabled camera system for on-course coverage of hole 8 — but it also developed a new railcam system specifically for this event that is being used on eight holes. 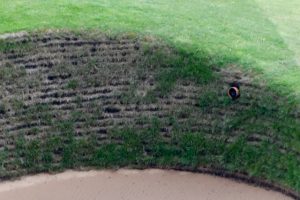 The showpiece hole for ACS is also the signature hole of the golf course: the par-three hole 8 hole is known for its green, which is nicknamed the “postage stamp” for its small size. But the hole is noteworthy also for the fact that it is surrounded by five nasty bunkers, bunkers that are the perfect place for ACS to install five cameras. Two of the bunker cameras can be panned and tilted by an operator located in an OB unit in the TV compound.

But the big news on hole 8 is the installation of a CAMCAT cable camera system alongside the hole. The unique geographical layout of the short hole nestled alongside hole 7 allowed cable-camera towers to be installed without impacting play and patrons. The result? A cable camera that can hover about 35 ft. above the tee box and then move alongside the fairway and capture shots from above the green.

“We’ve been working with CAMCAT systems for 20 years, and they are very reliable and knowledgeable,” says David Whitlock, operations manager, ACS. “We’ve worked with them on events like Royal Ascot and the Olympics, and, for something like a horse race, you want it to be fast and stabilized to cope with the induced role. But here we wanted something that was quiet and low-profile as it needs to make no noise. But it could also be lighter weight as it doesn’t need a big lens. We want to be slow, steady, smooth, and quiet.” 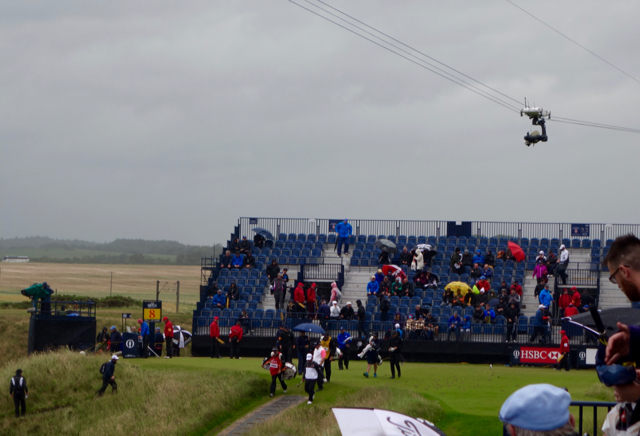 The CAMCAT system can follow alongside players from the tee to the green.

Getting the system in place required a few trips ahead of the event to make sure the towers were the right height and did not interfere with the grandstands.

“It’s the shortest hole in Open Championship golf, and it really lends itself to a tee-to-green system,” Whitlock explains. “We don’t have to go very high with the towers or far with the ropes.”

The combination of camera shots from the bunker cameras and the overhead CAMCAT system gives the production team a solid one-two punch to deliver compelling coverage of dramatic bunker shots from all angles.

“You’re not limited by the length of a jib arm,” Whitlock notes. “You can follow the players as they walk down off the tee box and follow them as they walk up the green, and you can cover the whole hole with one camera.”

The other big news for ACS at the Open is the deployment of nine railcam systems across the course. One system, located along the side of the green on hole 5, features an HD Cineflex V14 gyrostabilized pan-and-tilt head to capture great shots looking out across the green to the Atlantic Ocean and the Scottish coastline.

“The images are quite stunning, and it’s quite a short track that is only about 8 meters long,” says Whitlock. “We were worried it wouldn’t be long enough, but it is, as you have the foreground, the bunker, the fairway, and the sea. And having just a little bit of movement makes all the difference. It’s slow and subtle, and the director loves it.” 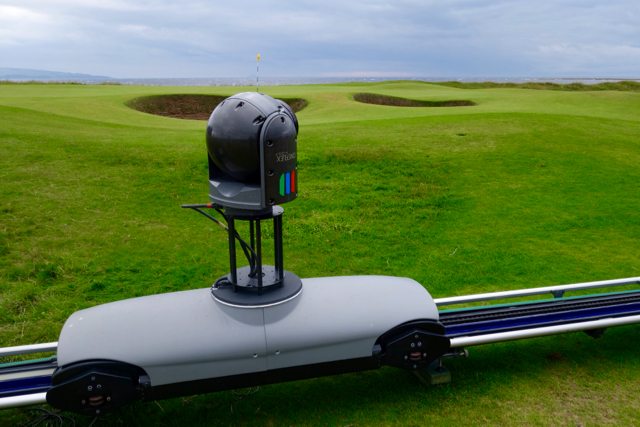 The eight other railcams are at the back of the tee boxes to capture compelling images from behind as the players tee off, without the need for a camera operator. On holes 10 and 11, the railcams are fitted with SMARThead remotes and integrated with the Protracer system to make it easier to ensure that the Protracer system is in the perfect spot to track tee shots as they leave the tee box.

“What Protracer wants is to be on the side of the player at a bit of an angle and then the ability to move to the other side of the tee box for a lefty golfer and then be able to frame it for slap graphics to slide into the frame,” says Whitlock. “The railcams are subtle and unobtrusive.”

Whitlock says development of the railcam systems shows ACS’s strong design and build capabilities, particularly since they had to be developed in a short timeframe in parallel with other projects.

“We had to build them from scratch as the features were purely client-led and we may not have another application beyond golf for the cameras,” he explains. “They are much more simple than the kind of railcam kit we normally come up with, and we were able to get them built in a couple of months.” 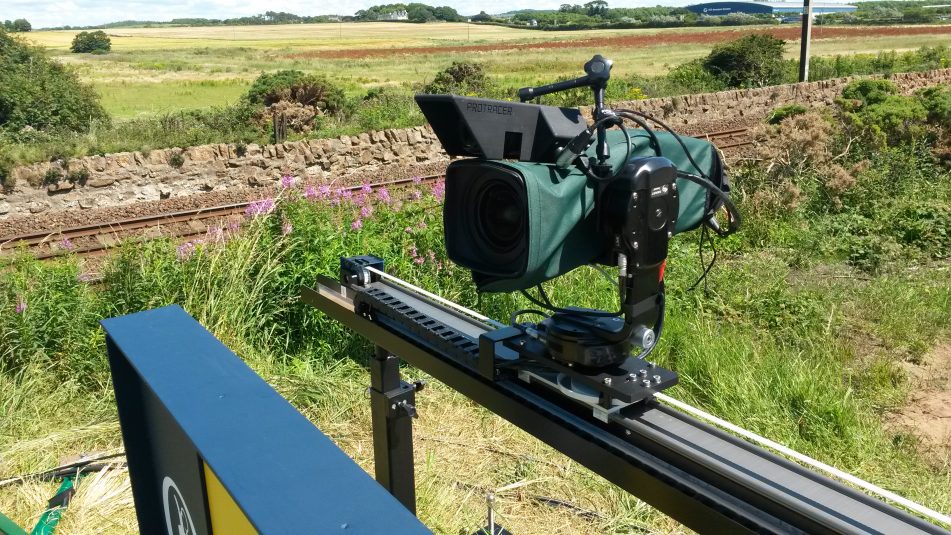 The rain and wind on Friday put the new cameras to the test, and Whitlock says they performed great. “It was impressive. The railcams are low-profile and designed to carry a Sony P1 camera and an ENG lens with the ability to hold a Protracer fixed head and move behind the player.”

Earlier this week, ACS was also operating a second point-to-point camera system (not a CAMCAT) to capture players warming up on the driving range and the putting range. The system had a range of 270 meters and was on-air for Golf Channel and Sky beginning on Monday. As with the CAMCAT system on hole 8, the goal a lightweight system that was quiet and could easily move up and down the long cable run. But, early on Friday afternoon, one of the four lithium batteries inside the buggy that rides along the cable (and holds the camera and the gyrostabilized camera head beneath it) caught fire for a still unknown reason. 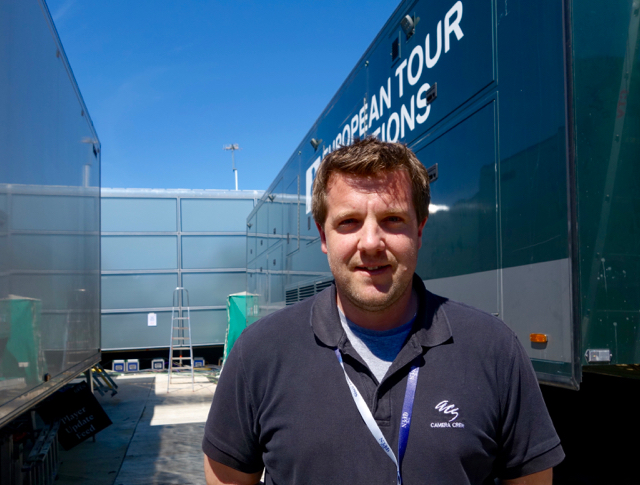 The camera and head were not damaged, but the system was put out of commission for the remainder of the event. The good news is the CAMCAT system on hole 8 was allowed to continue operation.

“We met with the R&A and their health and safety officer and explained the differences between the two cable systems and how they differed in operation,” says Whitlock.

In addition to the on-course cameras, ACS also provided the pre-event UAV and helicopter course aerials as well as 3X SMARThead remote systems (2X with Canon 100X box lenses) for the Golf Channel studio onsite for the week of the tournament.

The Open Championship is one of a string of global events that have nearly every production-services provider scrambling for equipment and personnel. It has arguably been an “all-hands-on-deck” summer for such events as the Euros, Wimbledon, the Open, and the upcoming Olympics.

“Wimbledon took an awful lot of our crew, so finding the right skills has been a real challenge,” says Whitlock. “Trying to split them off in two places at once is not easy. We’ve brought some of our minicam equipment up from Wimbledon, and it was de-rigged at Wimbledon on Sunday night and in the bunkers by Monday afternoon.”