Christie has announced that Suning Cinema, a wholly-owned subsidiary of Chinese electronics retail giant Suning Commerce Group, has deployed its RGB laser projection system for its new theaters located in Shanghai and Zhenjiang to deliver the ultimate 3D viewing experience for movie-goers. 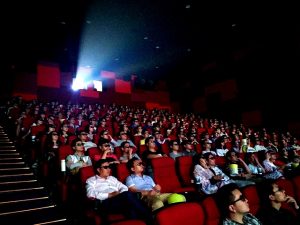 The premium auditorium of Zhenjiang Suning Cinema – located within the new Suning Plaza shopping mall in Zhenjiang, Jiangsu Province – is
equipped with a Christie RGB laser projection system featuring enhanced wavelength diversification (EWD). It is the first cinema hall in China to deploy the Christie CP42LH and laser modules that generate white light from multiple combinations of RGB primary color wavelengths to counteract speckle and offer a spectacular viewing experience on silver screens. Both cinema complexes have officially commenced commercial operations. Christie will continue to work with Suning Cinema to have more visual solutions installed in its new cineplexes across the country.

“We have compared several 3D cinema projection systems but nothing comes close to the quality and performance of the Christie CP42LH, which we have installed in our large screen auditoriums,” says Dalei Duan, General Manager, Cinema Operations, Suning Cinema. “This is the
most vibrant, colorful, and breathtaking 3D visual experience that I’ve ever seen in a large screen theater. We’re pleased to note that the Christie CP42LH delivers remarkable performance in our theaters at both locations, and have no doubt that patrons are getting the best possible visuals that will heighten their enjoyment of the movie playing on screen.” 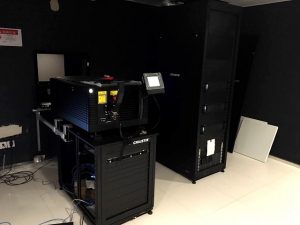 Duan noted that although Zhenjiang Suning Cinema is a new player in the market, it has laid out ambitious plans to open 200 movie theater complexes across China within the next five years. “We are working doubly hard to offer the best cinematic experience to all our customers. There are enormous opportunities to be tapped in cultural assets development and with the increasing demand for cultural assets such as cinemas, we believe that collaborating with Christie and investing in the best visual technologies, such as the RGB laser projection system, is the way to go,” he adds.

Jason Pei, Deputy General Manager, Christie China, comments, “Our groundbreaking 6P laser projection system is designed to achieve exceptional brightness in 3D to provide audiences with a truly unforgettable cinema experience, while the CP42LH RGB laser projection system featuring EWD significantly reduces the impact of speckle on silver screens. The latter enables exhibitors to continue using their existing silver screens and passive 3D systems, which in turn translates to significant cost savings. We are delighted that Zhenjiang Suning Cinema has placed its trust in our cutting-edge RGB laser projection systems, and we look forward to more collaboration in the future.”

Lin Yu, Vice President, Christie Asia Pacific, added, “I would like to congratulate Zhenjiang Suning Cinema for being the first cinema chain in China to deploy our Christie CP42LH featuring EWD to deliver an unparalleled laser projection and viewing experience. This system, together with the 6P laser projection system installed in Shanghai Fengxian Suning Cinema, have redefined the cinematic experience by allowing audiences to enjoy brighter, clearer and more vibrant visuals like never before. We look forward to working more closely with Suning Cinema, and having more exhibitors installing our RGB laser projection system in their premium large format theaters across China, including those from second and third-tier cities.”

Anchored by the Christie Freedom laser illumination system, the CP42LH produces a color gamut that exceeds the DCI P3 color and replicates the Rec. 2020 space, making it the most advanced RGB laser cinema projection system available.

Since its rollout two years ago, Christie’s RGB laser projection system has become the preferred choice for a premium 3D cinema experience in a number of cinema chains around the world. In Asia, theaters equipped with Christie 6P laser projection technology include Tongzhou Wanda Cinema in Beijing, the iconic Shanghai Film Art Center, and SM Seaside City in Cebu, the Philippines.