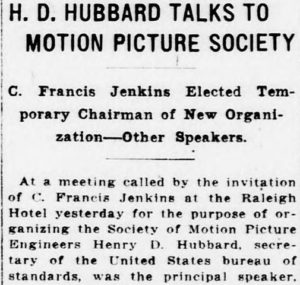 Today, July 24, 2016. as this image from page 13 of the July 25, 1916 issue of The Evening Star in Washington, D.C. indicates, is the 100th anniversary of the first meeting of the Society of Motion Picture Engineers, the group that became SMPTE in 1950 when a T for television was added. The article noted that, besides Hubbard (then secretary of the Bureau of Standards), other speakers at that meeting in the nation’s capitol included a professor from George Washington University and someone from the U.S. Patent Office. Perhaps most significant, however, was the last line: “The next meeting is to be in New York October 2.”

It’s not that there was something special about the date or the city; it’s that the Society was very peripatetic. After New York came Atlantic City, then Chicago, New York (again), Rochester, Cleveland, Philadelphia, Pittsburgh, Montreal, and Dayton, all within the Society’s first five years. In the next five, it added Buffalo, Boston, Ottawa (Canada), Roscoe (New York), and Schenectady, with few repeats. 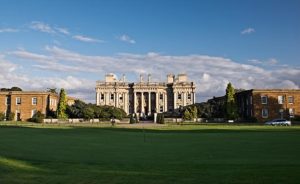 I’m a “Life Fellow” of SMPTE, “Fellow” by selection and “Life” because I’m old and have long been a SMPTE member. When I began attending SMPTE’s annual conventions, they alternated between Hollywood and New York, but there was also an annual winter television conference. In odd numbered years it eventually settled in San Francisco, in even ones in other cities: Atlanta, Dallas, Denver, Detroit, Key Biscayne, Montreal, Nashville, Seattle, Toronto—even New York. As SMPTE has gotten older, it doesn’t seem to want to move around as much (or maybe potential attendees don’t). The annual convention is now just in Hollywood. Another annual conference, Entertainment Technology in the Connected Age, is also in California, as is the now-SMPTE-affiliated HPA Tech Retreat. SMPTE’s annual Future of Cinema Conference is slightly past the state line in Las Vegas. There are also SMPTE conferences in Australia and, as of this year, an HPA Tech Retreat in the UK, but, as far as the U.S. is concerned, California and Las Vegas seem to be it for national events.

Of course, there are also SMPTE section meetings. The winter television conference was originally organized by the Detroit section, in conjunction with other nearby sections. Of late, some sections have been having their own longer conferences — one or two day “boot camps” in New England and Toronto and what the mayor of Chesapeake Beach, Maryland, named “Bits by the Bay” (2015 version shown at right), organized by SMPTE’s Washington section.

Two big topics have been dominating those regional conferences of late: a transition from the serial digital interface (SDI) to internet protocol (IP) and another transition from conventional HDTV to what might come beyond (higher spatial resolution, higher frame rate, higher dynamic range, wider color gamut, etc.). For a presentation at a single, national conference, one could easily imagine any SMPTE member paying travel expenses and conference fees. To do presentations at all of the regional conferences would seemingly require the support of a manufacturer or service provider with a point of view. I attended all of the regional conferences in the previous paragraph, and, indeed, most of the presentations were by people employed by manufacturers; I’m pleased to be able to report, however, that corporate viewpoints were kept to a minimum, and even those presentations with the strongest viewpoints were chock full of information. 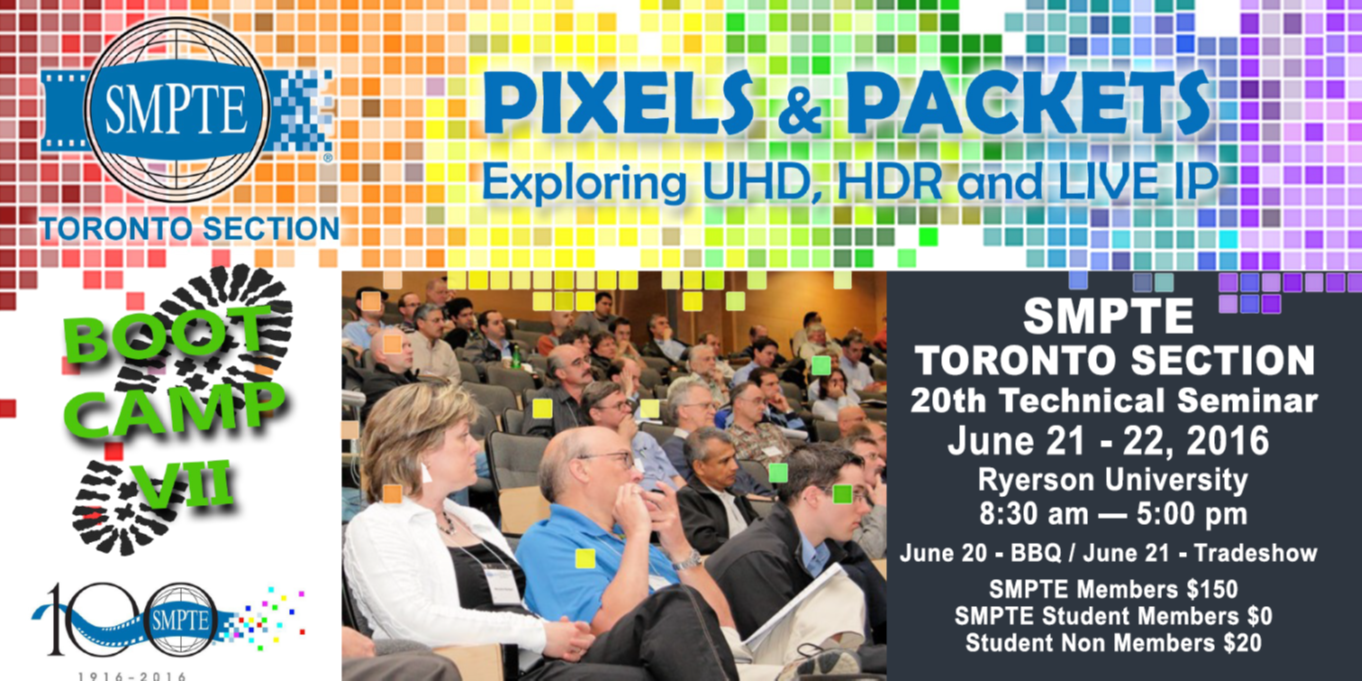 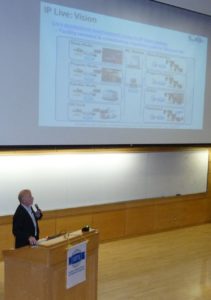 Consider the SMPTE Toronto Section’s Boot Camp VII. As shown above, it was nominally a two-day conference, with a cookout the evening before. But the cookout was followed on the same evening with a presentation at the Rogers Centre stadium (formerly called the SkyDome) on the latest work by Dome Productions on a transition to Ultra-High Definition (UHD), including a mobile-production truck. Many have suggested that a UHD mobile unit would have to use IP interconnection technology, but the Dome presentation explained why they’d actually chosen to stick with SDI. UHD SDI connections can entail four three-gigabit (3G) SDI cables or a single 12G. That’s enough for pictures 3840 pixels wide by 2160 scanning lines high, maybe with higher dynamic range (HDR) and wider color gamut (WCG) to boot, but doubling the frame rate, too, would seem to require 24G SDI. Is such a thing even possible?

One presentation on the conference’s second day, from John Hudson, director of strategic technology and international standardization at Semtech, suggested that 24G SDI has long been in the planning stages. Of course, other presentations showed how a video facility might move to IP. There’s a lot of work involved either way. There’s also a lot of work involved in the transition to what comes after HDTV. Color-imaging guru Charles Poynton explained, for example, a practical problem with WCG. He pointed out that the exact color of the popular animated fish, Nemo (portion shown at left), is outside of standard color gamuts. And, if some sort of simple conversion from WCG to ordinary color is done, the scales on Nemo’s skin could disappear. In other words, Nemo would cease to be a fish. 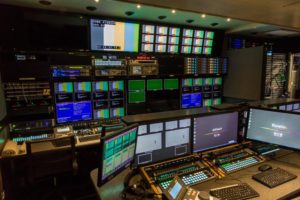 Then there was one of the last presentations of the conference (the 20th), that of Brian Learoyd, engineering manager of Rogers Sportsnet. He told about the tremendous effort involved in launching a UHD channel. After figuring out how to get it up and running on time, he was called into a meeting and informed that, instead of one UHD channel, those in charge wanted four. For the one, Rogers Sportsnet got content from Dome’s new facilities. For the other three, HD content was upconverted. A panel that followed, on which Learoyd participated, explained how Rogers could get away with such upconversion; the difference isn’t all that noticeable.

Another panelist, Matthew Bush, president of Triangle Post in Toronto, and a big fan of the beyond-HDTV technologies, explained working on a UHD project with HDR and WCG. They showed the result to their client, who didn’t seem to think it was a big deal until offered a side-by-side comparison with the ordinary HD version. Then it was considered a wow.

As SMPTE heads into its second hundred years, it has developed and is continuing to develop the standards to smooth the woes of the transitions to IP and beyond-HD imaging. The society has members around the world working on everything from entertainment to medical imaging to motion pictures from deep outer space. A “centennial gala” is planned in conjunction with the annual conference in Hollywood in October. But the local sections do a heck of a good job of education, too. In my opinion, they’re a big wow. 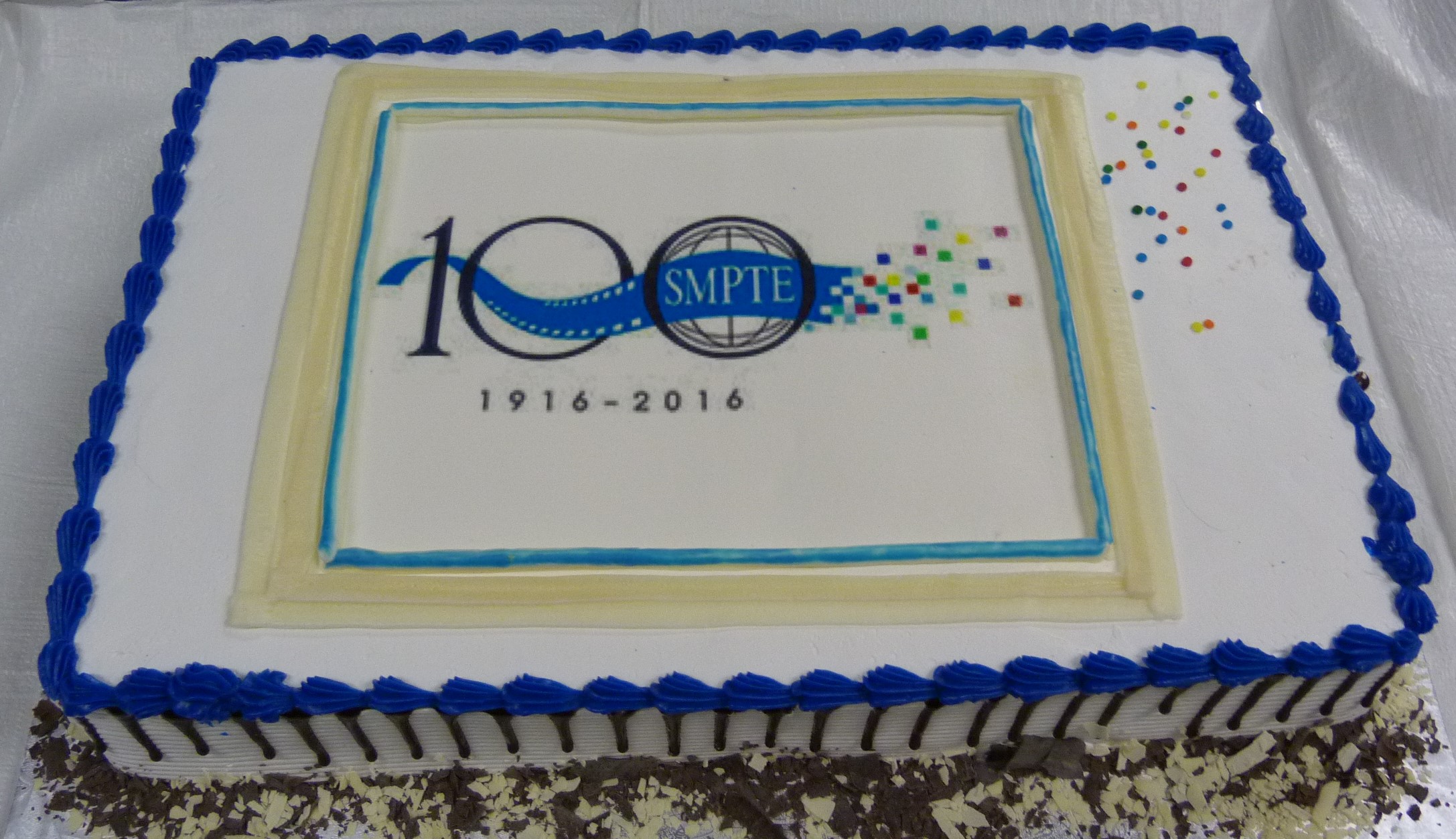