The city of San Diego took the sports spotlight when the MLB All-Star Game traveled to Petco Park this month. Fox Sports and Fox Sports San Diego, which televises all Padres games, provided an example of synergy: Fox Sports used the RSN’s studio facility adjacent to Petco Park to create original programming, and, in the days leading up to the big game, FS San Diego used Fox’s primary MLB All-Star Game pregame set inside the ballpark for its studio programming.

While onsite, SVG sat down with Henry Ford, who has served as the RSN’s GM/SVP since it launched in 2012 and, as part of Fox Sports Regional Networks’ restructuring, recently added oversight of Fox Sports West and Prime Ticket. Here is what he had to say about his new role leading Fox’s Southern California RSNs, Fox Sports San Diego’s All-Star efforts, how the RSN and its programming have evolved since its launch in 2012, the impending retirement of legendary Padres broadcaster Dick Enberg, and how technology can help drive RSN storytelling to deliver a national A-game–level production. 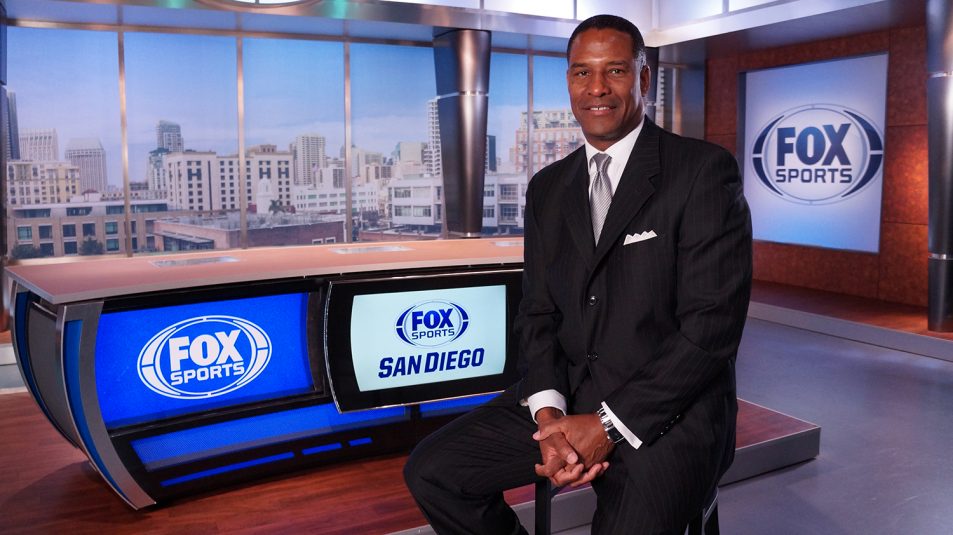 How did Fox Sports San Diego prepare for the arrival of the MLB All-Star Game?

My executive producer, my operations director, and I traveled to Cincinnati for last year’s All-Star Game, and we came away with a lot of ideas. We thought that colleagues in Fox Sports Ohio did an outstanding job. When we came back here, we knew that we had some synergies and some assets that were unique to Fox Sports San Diego, and we wanted to take advantage of those. The biggest synergy was obviously the proximity of the ballpark and our office. And the fact that we are so close to [Fox Sports Broadcast Center in] Los Angeles would make it easier to collaborate. Once we returned home last July, we immediately started talking to our colleagues at Fox Sports about how we might be able to use our indoor facilities and the Park at the Park [inside Petco Park] to bring about a viewer experience that was unmatched by any other event at this point.

How has Fox Sports used your studio for its MLB All-Star shoulder programming?

When Fox came in, they knew that they had a very defined period of time in which they were going to use the studio: mostly in the daytime. We use a backdrop in our studio rather than [the window that looks out onto the park] for lighting purposes, particularly during the daytime. Fox decided to utilize new window-film technology that interacts with the camera to change the aperture, allowing the light in or keeping light out, which allowed them to utilize the [window] that we haven’t in the past. While we’re very intrigued by it, we are likely to continue [using backdrops] for the rest of the season and then evaluate it [in the fall]. What Fox did looked absolutely gorgeous, but we only use this studio for road games, and we use our set at the ballpark for home games, so we would have to evaluate it.

How was using Fox Sports’ set at Petco Park in the days leading up to the All-Star Game?
It was great. We previously had our outdoor set at the Tony Gwynn Monument, which was in a similar position in the Park at the Park. We utilized their set last week, and our guys loved it: wonderful backdrops, great camera shots, a great way to showcase Petco Park. Being outdoors is always good for them, particularly on a road game, where they don’t normally get to do that.

How do your efforts at All-Star demonstrate the increasing synergy between Fox national and the Fox regional networks?
I think we’ve demonstrated on both sides this week that it can be done and can be done extraordinarily well during big productions. It took a lot of planning over several months and then actually executing those plans the past few weeks. Big Fox and the regional have really been simpatico in terms of our using their facilities and their [using] ours. We were also working collaboratively with Fox Sports Radio and Fox Five, a local Fox affiliate. 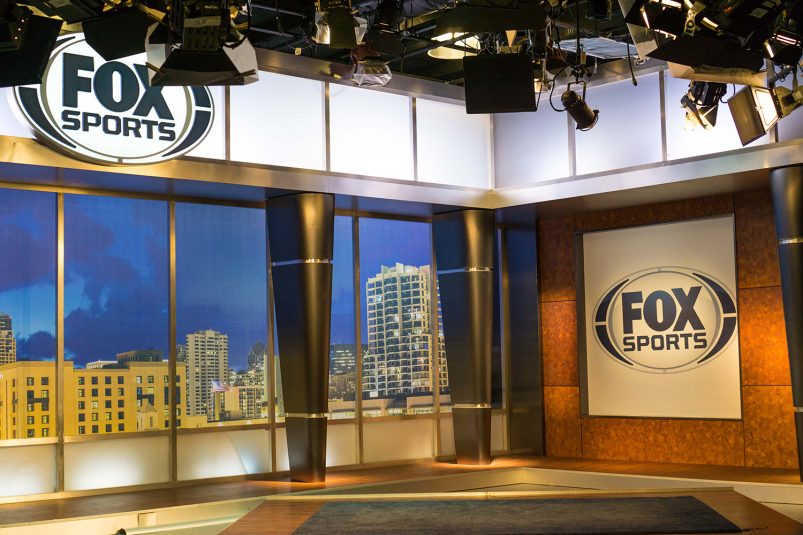 How are you adapting to your additional role overseeing Fox Sports Prime Ticket and Fox Sports West? How do you see the RSNs finding new synergies to become more efficient?
I don’t think it’s managing for efficiency; I think it’s managing for excellence. It’s still very early on, but, in the short time that I’ve been [in this role], I’ve already found a lot of ways that we can share resources and work together. The networks have always worked well together, and I have great relationships with my counterparts there.

I think the timing was perfect with the All-Star Game. We were able to share our digital host [Brie Thiele] and experiment with some of the things we do in Padres games on our website and social-media platforms on [Los Angeles] Angels broadcasts, too. She was already doing [Los Angeles] Clippers and [Anaheim] Ducks [games]; now she’s able to fan out and do all Southern California teams. As far as the All-Star Game, we’ve been able to take programming and distribute it across Fox Sports San Diego and Prime Ticket. So we’re looking at programming that we can distribute across all Southern California. We’ve had some excellence in advertising sales as well.

How has Fox Sports San Diego evolved since its launch?
When we launched, we decided from day one that we wanted to look as good as the national telecast every day. We had Dick Enberg, we had all the latest technology available to us, we developed a set in the Park at the Park, and we brought in superior studio set pieces. We continue to shoot every [studio show] and every game with the expectation [that] it’s going to have a national-game look and quality. That’s our mantra every day, every game.

We launched just in time for the baseball season and started moving into this facility that summer but didn’t have full use of our studios. We thought we did some pretty incredible things in 2012, including [the Carrier Classic] on the on the deck of the USS Midway.

In 2013, we focused on being San Diego’s first full-time, 24-hours-a-day, seven-days-a-week regional sports network, where you can get all of your Southern California sports that we had rights to with full seasons of the Padres, Clippers basketball, Ducks hockey, as well as USD and SDSU men’s basketball games and more. [We had more than] 500 live events a year on our air. We were also developing our studio programming. I think it was important for us to be there for San Diego and be the hometown regional sports network for Padres baseball games and other Padres content.

Today, we continue to seek great new programming, whether we produce it ourselves or acquire it through someone else.

How does original programming like Padres Live, Padres POV, #SDLive, and Cup of Coffee With Dick Enberg, Behind the Bolts, and SDSU coaches shows add to the overall Fox Sports San Diego product?
I think it gives people a fuller look at the athletes that they admire and the teams that they love. People expect us to provide multidirectional views of players and teams and where teams are going, and the shoulder programming allows us to do that — whether it’s Padres Live pre- and post-game shows, which allow us to talk strategy and the team as a whole, or it’s a more personalized show like Padres POV or even focused on a particular player like Cup of Coffee. 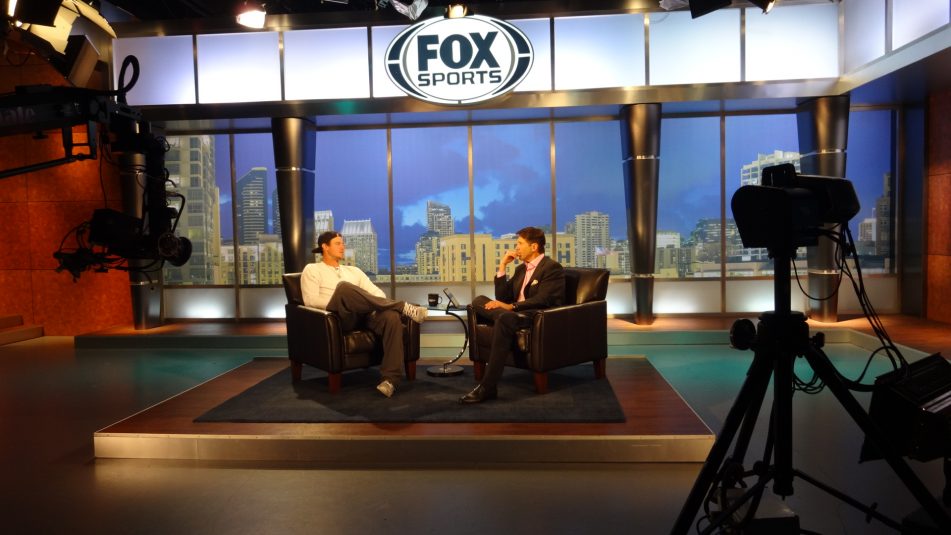 When we first started, I challenged our executive producer [to accomplish] three things: produce great games and great shows, entertain our viewers, and educate our viewers. I think the pre- and post-game shows, shoulder programming, weekly shows, and everything else that we do meets those objectives.

How does technology help Fox Sports San Diego deliver better in-game coverage?
In terms of education, I think that our use of technology in our live programming, especially Padres games, is huge. We don’t just utilize a technology; we want to develop storylines around it. One of the biggest additions this year is how we’re using FoxTrax [pitch-tracking]. Our feedback shows [that] viewers have come to expect that, after a pitch, they’re going to see where the ball went. And it allows our announcers to talk about the storyline of the at-bat or at-bats on because you can see a progression of pitches.

We also utilize the [Vision Research] Phantom [ultra-high-speed] camera. I was astonished by the technology when I first saw it. You can see the vibrations in the bat when it makes contact with the ball. When a runner hits a home run, you can see where the sweet spot is off the bat. We can develop storylines around that, not only in the game but in the postgame and even the next day’s pregame show as we reflect on that. That goes back to the education piece, which is really big for me.

With Dick Enberg completing his final season in the booth, can you reflect on what he has meant to Fox Sports San Diego these past few years?
I think Dick has made everyone around him better. He has experience and wisdom that he’s been good enough to share. Just his presence causes everyone to be on their best game. He joins the production conference calls every morning, and he doesn’t just stay quiet. He supports what’s being discussed; he drives the conversation and contributes to the production calls. And, when he speaks, people listen because he brings a wealth of knowledge and experience that people want to hear.

We were very pleased to have the opportunity to go out and grab [Red Sox broadcaster] Don Orsillo last fall, and we feel good about where we’re going following Dick’s retirement later this year and going into next year with Don.

What do you see as the greatest challenges facing the RSN market today?
How do you provide that second-screen experience, and how do you provide your primary stream on mobile devices? We’ve done everything we can to provide the most robust platform of mobile content at this point with Major League Baseball and NBA basketball and [now] NHL. Having our content where our viewers want it when they want it is important to us. Those are good challenges that we embrace. I think, rather than focusing on losing subscribers at this point, we need to focus on being where those subscribers are and where they want their games.

How can you work to keep fans engaged when your team is having a down season?
I think it goes back to our core tenets: produce great baseball games, entertain our viewers, and educate our viewers. I think, no matter how the team is performing, we’re going at it the same way every night: looking for those storylines to make it entertaining. We have a feature called “Pick the Stick.” Every night, all of our talent chooses their player that’s going to have the most impact on a game that night, and there is a running total of how they performed throughout the course of a season. That sets up five or six storylines because everyone has to give some explanation why they chose a particular player. So everything we do, whether the team is in a pennant race or not, is of the same quality — with production, ad sales, marketing. Whatever it is, we are going to put our very best foot forward.