As a crew member put the finishing touches on an animated re-creation of a Matt Kuchar drive at the PGA Championship Thursday morning, Ken Aagaard, EVP, innovation and new technology, CBS Sports, leaned in and said simply, “You guys are doing a great job here.”

He then stood upright, flashed a smile, and said to no one in particular, “I haven’t been this excited about a technology in a long time.”

There’s an abundance of innovative technology, a production compound 24 trucks deep, and even a live 4K show being transmitted from Baltusrol Golf Club in Northern New Jersey this weekend, but an enhanced graphics element is stealing the spotlight. 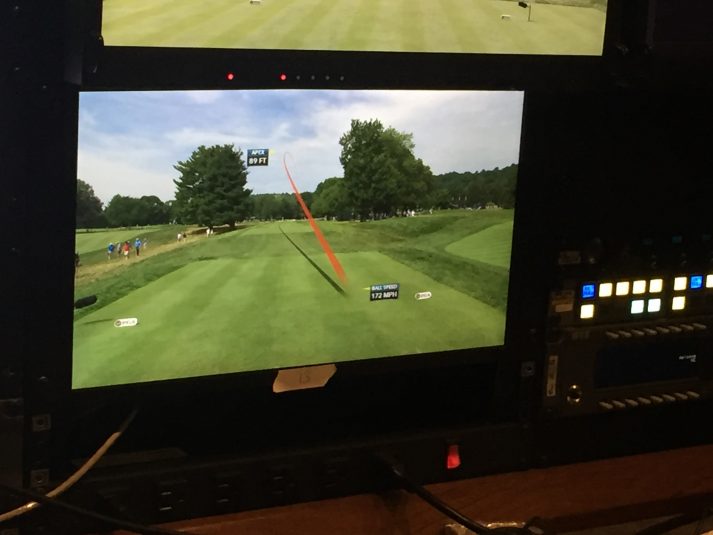 CBS and Turner Sports are uniting tracking, data, and animation sources to create real-time shot-tracing graphics displayed on split screen with the live shot of a golfer during this weekend’s PGA Championship.

“This is exciting, and this is the next step [for golf production],” says Aagaard. “It’s a step that, personally, I’ve been looking to see golf take. I’m really, really pumped about this. This is a big deal for us. I think this is an area where we can move our golf coverage forward a significant notch.”

Trackman’s technology uses 3D radar tracking to illustrate on-screen a trace showing the path of a drive from the tee and providing perspective of distance, height, curvature, and more. Meanwhile, GolfTrax provides an animated aerial view of the course to identify ideal landing areas on a hole and the best path to the pin. Bring that all together with ARL, a New Zealand-based technology and services provider, and you have the secret sauce for the dynamic content being overlaid on this year’s tournament coverage.

Although CBS Sports has used GolfTrax in the past, it has always been a full-screen element displayed in reviewing a shot in replay. Now viewers can track a player’s shot from the tee in real time and see how far it was hit and if the accuracy and distance are positive. It takes away a lot of the mystery that golf coverage has had for the average fan. 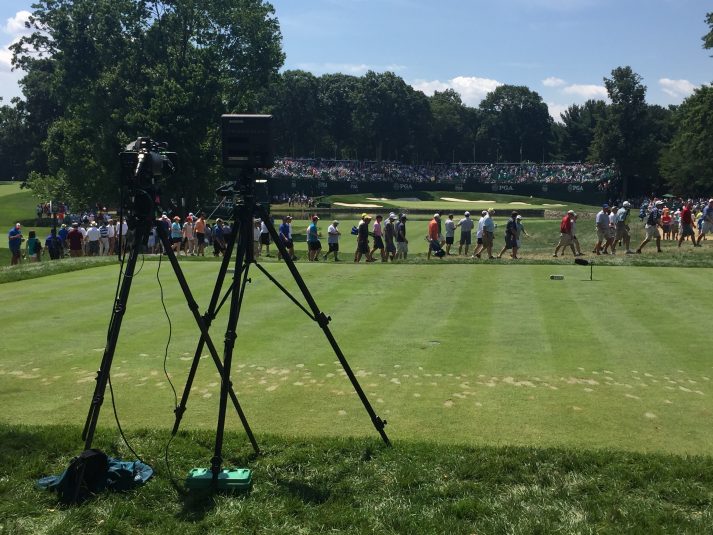 Seven Trackman systems (the square unit to the right of the camera) will be moved around the course to provide content throughout CBS and TNT’s coverage.

“Having the ability to trace ball flight [in real time] has changed the game in some pretty profound ways in terms of golf coverage,” says Matt Kane, associate producer, Turner Sports.

The offering certainly alters internal workflows and significantly impacts the jobs of director Steve Milton and Coordinating Producer Lance Barrow and how the story of golf can be told. According to Aagaard, those two network-TV pillars have embraced the technology.

“I’m a purist,” admits Milton, who has served as lead director on the PGA Championship and The Masters for CBS since 1997. “You’ve got to balance this. You can’t do this every shot. Nobody wants it every shot. But, when it tells something everyone can understand and when it can enhance to story of a hole, I think that’s the opportunity to use it.” 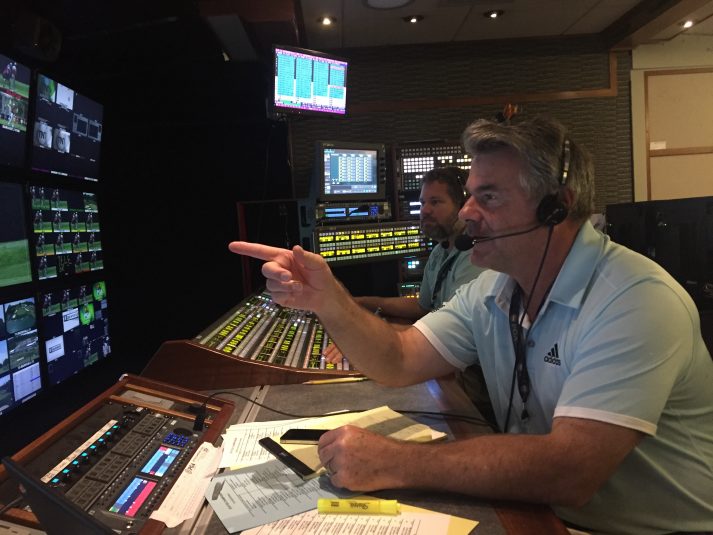 CBS and Turner have a combined seven Trackman systems deployed on the course at any given time. Their plan for moving them around throughout the weekend accounts for numerous variables, including who the big players are come the weekend and whether the unit can be moved from one point to another logistically.

Aagaard is hopeful that the CBS production team can perfect its use of the system so that it becomes a standard part of the network’s golf coverage and can be used year-round, not just at selected majors.

In the [Massive] Compound

Amazement and sheer awe in the size of the production compound at Baltusrol was a common theme among many folks around the TV grounds. 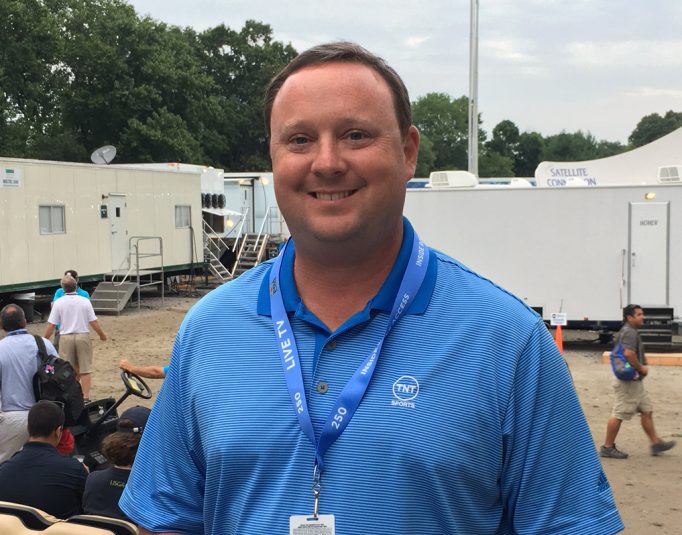 “It’s been through its paces now,” says Aagaard. “It works really well. We’re still honing and fixing and tweaking technical aspects of how signals get routed in a lot of the infrastructure within the trucks, but, overall, we are quite happy with the performance and what NEP has been able to do for us.”

As for the rest of the trucks onsite, it’s an all-star showing from many of the major truck providers. Besides SSCBS, NEP has SS11, SS15, SS22 (A and B units), TS2 (A and B), Nickel, Chromium, NCP8 (A and B), and ESU. Game Creek Video Encore A, B, and C are here, along with Edit 1, which houses all onsite edit suites for the production. Broadcast Sports International (BSI) has three trucks on hand to support a robust RF deployment. And Mobile TV Group’s 39 Flex is supporting the 4K production of hole 4 that’s being sent to DirecTV.

A Return to Traditional Course Challenges

Whereas last year’s PGA Championship took the final major of the season to Wisconsin and the vast and unique Whistling Straits course, this year’s iteration is a return to a more compact, less hilly, and heavily tree-covered course. 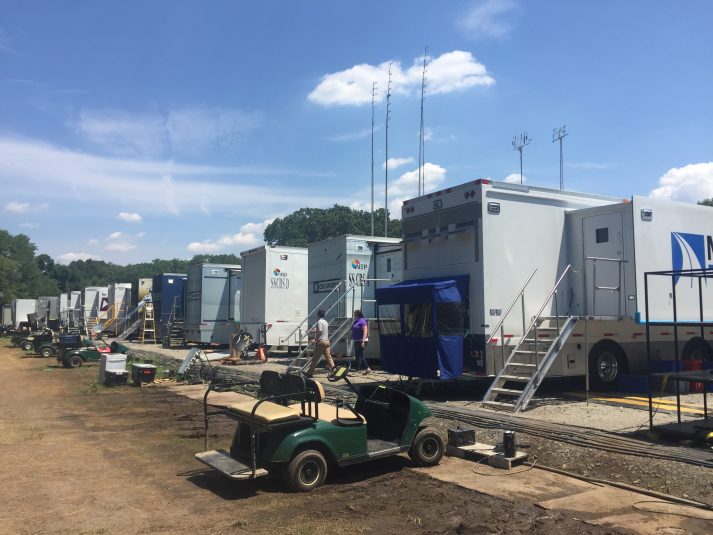 “Obviously, every venue presents its challenges,” says Kane, “but Whistling Straits was a big arena in terms of the amount of space we had to work with, especially from a compound standpoint. Whistling Straits had its issues with trying to get camera operators over 30-ft. dunes and scrambling through bunkers they didn’t know were there.

“We don’t have to deal with those challenges here,” he continues, “but what we do have to deal with is, it’s a bit of a tighter footprint once you get on the course. It’s one of those old-style traditional golf courses built back in the ’20s, and it’s surrounded by a residential neighborhood. When you get into a place like that, there’s always a dance that you need to do, recognizing that you are in a club and the whole layout is a bit tighter: there’s a lot of trees at Baltusrol — Whistling Straits was so wide open — so we are going to have the normal RF challenges that you wouldn’t have at, say, a Whistling Straits.”

The most notable factor this year is the combination of extreme heat and rain in the Springfield, NJ, area. Thursday saw temperatures reach the mid 90s with very high humidity. Steady rain is forecast for Friday morning, and thunderstorms could threaten the remainder of the weekend.

“We’ve got a big crew here, and we have to be very careful,” says Aagaard. “We are taking all the precautions we can. Making sure we have everyone hydrated and have ice packs for around their necks. We are all looking out for each other. We take this very seriously when you get an event this size and this scope with this kind of heat.” 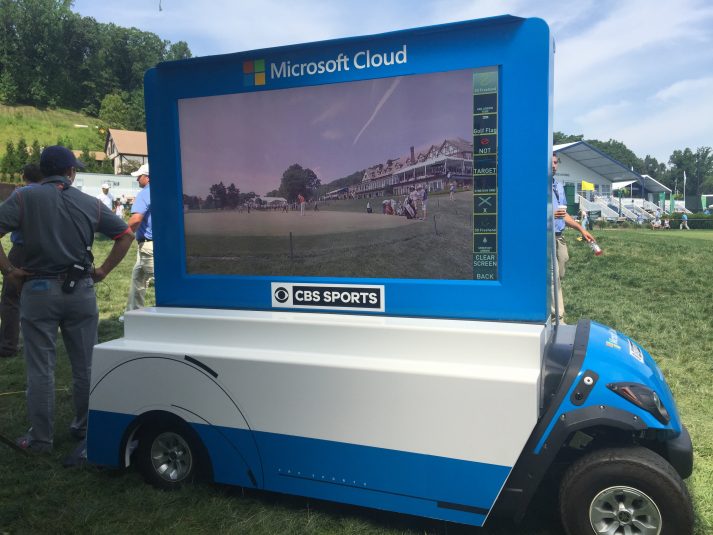 The Smartcart — a large, mobile touchscreen used for analysis on the course — is making its PGA Championship debut.

Smartcart Makes PGA Championship Debut
Smartcart, which has become a welcome staple for CBS Sports’ golf coverage, is making its first appearance at a PGA Championship. The custom-fitted golf cart features a 72-in. touchscreen and a multitude of broadcast applications. It’s a slick tool that allows on-air talent to analyze and telestrate swings, shots, holes, and more in a very dynamic and interactive way.

The cart can freely move about the course but, on Thursday and Friday, was positioned at the driving range and used by CBS Sports Network for its PGA Championship on the Range program.