NEP Group has had a presence at the Olympic Games since 1988 (when it worked with NBC Olympics at the Seoul Games), and, this year, it is providing technical facilities and personnel for NBC Olympics, Sweden’s Viasat, Channel 7 Australia, and more. 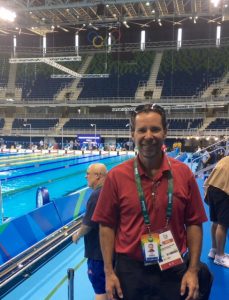 NEP Group’s Glen Levine at the swimming venue in Rio

“We’re here with NBC supporting them at four venues,” says Glen Levine, president, U.S. mobile units, NEP Group. “We have SS25 here for the athletics and Opening Ceremony, ND5 at beach volleyball, Iridium at gymnastics, and NCPXI handling swimming. SS25 will move after the Opening Ceremony to the athletics stadium, while XI will eventually move to cover the Closing Ceremony.”

Additional units are on hand in Rio: SS21 and Platinum; Unit 15 and Unit 16 from NEP Belgium; and HD4 and HD5 from Germany and Sweden, respectively.

“We have 40 NEP U.S. employees here and another 40 from around the world,” says Levine.

It took a lot of preparation and planning to get the production units ready for the Games, including installing some NBC equipment in the U.S. and upgrading some of the facilities. The EVS servers and workflows were upgraded to the XT3 version, and support of 10-Gbps networking was implemented. Routers were also updated, and support of MADI streams was added.

“We were coming out of the NBA and Stanley Cup Finals, so the last few weeks were truly insane. But the whole NEP team did an awesome job of staging and preparing everything,” says Levine. “We didn’t want to deal with things like installing equipment once we got here onsite.”

Once the new equipment was in place, the trucks were driven in a convoy to Laredo, TX, and then sent on a 20-day voyage via freighter alongside a shipping container fully packed with additional gear. Much of that equipment is in flypacks, two of which are at the golf venue for NBC’s unilateral coverage and for Golf Channel Live. Golf Channel is offering plenty of coverage from Brazil, especially next week in the days prior to the start of the men’s medal round, which begins next Thursday.

“We’re continuing to see flypacks in secondary roles at the main venues, but they are also starting to grow in use at the IBC as facilities scale down,” Levine explains, noting, “We have new state-of-the-art flypacks with lightweight consoles that are next-generation systems that will be part of our growth around the world.”

For big events like an Olympics, however, Levine sees the continuing need for mobile units because they provide a physical environment that is familiar to the production teams.

Once the 2016 Rio Olympics conclude, NEP’s trucks will be back on the high seas, headed to the U.S. for a busy fall sports season, particularly NFL and college football. Topping the list? Thursday Night Football, which is split between CBS Sports and NBC Sports. NEP’s SSCBS unit will once again deployed for CBS coverage, and ND7 will be used by NBC Sports for the second half of the season.