When it comes to remote production, smaller is generally better, and this extends to audio monitors: the constrained spaces of production trucks determine the acoustical environments that A1s will have to mix in. But the physical size of audio monitors is just the start. The monitors are also asked to electronically adapt themselves for those less-than-ideal mixing spaces, using DSP to adjust such parameters as equalization and time alignment to create a more accurate audio picture of what’s taking place on the field.

JBL’s recently introduced 7 Series audio monitors are sized for such spaces. “We designed the 7 Series so that you can do with a 5 in. speaker what you’d normally need an 8-in. speaker to do,” explains Peter Chaikin, director, recording and retail solutions, JBL. “Getting a smaller speaker to reach down to 39 Hz is what you need in that kind of environment for both music and sound effects, and sports is using more of both now.”

He adds that future iterations of the Series 7 will address other issues relevant to small-room acoustics, such as automatically adjusting to the acoustics of the spaces the monitors are used in. 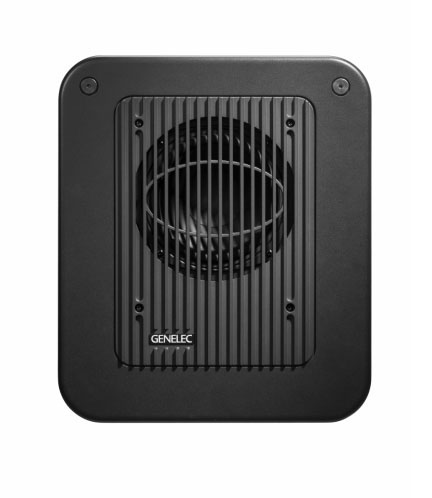 Both Blue Sky and Genelec monitors already include automatic-calibration capabilities. Blue Sky’s Audio Management Controller (AMC), introduced last year, can be used with more than the company’s own speakers, says Chris Fichera, VP, audio, Group One Ltd., which distributes the Blue Sky speaker brand. At a cost of $3,000 for the system, he says, the AMC addresses the necessity of small-room acoustical measurement, which tends to be overlooked in remote-production environments. “The idea of properly measuring these kinds of environments has gained real legitimacy very quickly,” he says. “That’s because it can make a huge difference in creating an accurate monitoring environment.”

“Everyone clearly has to think smaller,” says Will Eggleston, director of marketing, Genelec. “Our most recent product line was our smallest yet,” referring to the 8340A model, which includes the Auto-Cal and GLM control-network technologies. Reduced physical size extends to the subwoofer: Genelec’s ultra-compact 7040A is a 16.1- x 13.8- x 8.1-in. cube. “It’s not a true ‘.5’ sub; it’s an extension of a stereo-monitoring system,” he explains. “But that’s what’s mainly needed in the smallest trucks.”

The ability to physically fit into increasingly smaller monitoring environments continues to be critical as broadcast production moves into smaller quarters. These quarters take the form of smaller Sprinter-type vans, which networks are using for broader coverage of smaller sports events, and flypacks, which are shipped to event locations — all supporting the growing use of the REMI (remote-integration) model pioneered by ESPN. REMI consolidates most of a broadcast’s audio and video assets in a single production truck or platform, with such tasks as audio mixing and video switching done at a studio hundreds or thousands of miles away.

But, like viewers at home, broadcasters are also counting on big sound. “That’s always been the challenge with speakers,” he adds. “Since the very beginning.”