LeSports HK launched last week with a series of sports programming. To welcome in the 25th season of the Premier League, LeSports HK has invested in creating a brand new Premier League live broadcasting studio, which is ready to broadcast beginning August 8. 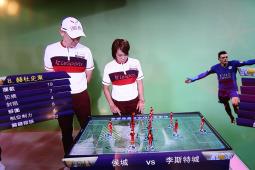 The channels will broadcast all 380 matches of the season live from 13 Aug onwards and distribute the information as a news source to media in Hong Kong. LeSports HK, together with the media solutions provider Century Sage Scientific Holdings Limited, created the new broadcasting studio with the most advanced facilities.

The Premier League content will include commentary with a 3D Chess Touch Table of using augmented reality (AR), real-time data in the analysis and player comparison that will provide a brand new experimental experience to the users. LeSports HK will provide firsthand information of the latest Premier League news that the users will be able to receive. LeSports HK will produce Premier League programs for users from every Monday to Friday. Programs on Monday night will replay the key moments of the matches. A self-produced program on Tuesday night will invite famous football coaches and players in Hong Kong to the show and analyze the strategies and the attacking and defending tactics. The panel on Wednesday will invite referees, football fans and commentators to have an interactive discussion on each week’s hot topics and key comments on the internet. The Thursday show will be an official program by the Premier League including the introduction of the culture of the Premier League, the interviews with players and feature stories. The program on Friday night will preview the key matches in the coming weeks.

“The Premier League is the most popular sporting event in Hong Kong. LeSports HK comprehends world-class sporting events to provide exciting and diverse content to Hong Kongers. Therefore, we have invested in possessing exclusive broadcasting rights for the Premier League from 2016 to 2019. Users will enjoy matches not only from the TV app for the Le TV and Le TV Box, but also the official website (LeSports.com) and smartphone apps.” Lai Yu-Ching, Acting CEO of LeSports HK revealed.