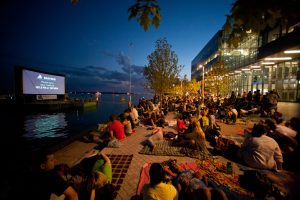 For the first time, Christie will be a major sponsor of Sail-In Cinema – an annual event that invites movie-goers to bring their lawn chairs and blankets, or anchor their boats in Toronto’s Harbor to enjoy three nights of movies under the stars. Movies will be shown on a two-sided, four-story screen mounted on a barge in Lake Ontario.

“PortsToronto is thrilled to have Christie digital onboard this summer as a major Sail-In Cinema sponsor,” says Deborah Wilson, VP, Communications and Public Affairs. “With four Christie cinema-quality digital projectors and custom configured audio in place, this year’s event promises to delight audiences with beautiful, crisp images of their favorite movies.”

Geoff Chick, senior sales manager, central Canada, Christie, says, “We’re thrilled to be sponsoring PortsToronto’s sixth annual Sail-In Cinema. I’m confident that the clear images offered by Christie projectors will show the movies in their best possible light, whether viewing them on land or from the lake.” 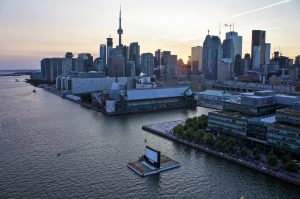 Sail-In Cinema will be using four Christie HD14K-M projectors, which have built in warping, blending and color matching capabilities, and offer 13,500 center lumens in a two-lamp configuration housed in the smallest chassis in its class. These projectors are made-in-Canada in Kitchener, Ontario, and will be double stacked and projected onto each side of the screen.

The inaugural Sail-In Cinema was held in 2011 to mark PortsToronto’s centennial year. Sail-In Cinema 2015 was the largest on record with over 11,000 people on-land and over 100 boats in attendance over the three-day period. Sail-In Cinema is now a permanent fixture in Toronto’s summer calendar.