NBC Sports streams more hours, with higher peak usage, and at faster speeds than ever

The Rio de Janeiro Games mark an important change for Olympic viewing. Although NBC Sports ramps up online efforts every two years, this time, viewers have decided that the online coverage is superior.

By the end of the Games, NBC will have streamed 4,500 hours of live coverage, up from 1,000 for the 2014 Sochi Games and 3,500 for the 2012 London Games. It’s offering well-designed apps for all major phone and connected-TV platforms, as well as a dedicated website. No wonder online-streaming numbers are way up — apparently at the expense of broadcast.

Then there’s this: Ratings for NBC’s Olympic broadcast are 20% lower than they were during the London Games.

NBC’s emphasis on streaming has led to two major challenges for Akamai, according to Ben Bloom, senior manager, media and gaming professional services, Akamai. “The first is the availability of every event during the Olympics live online,” he explains. “This is the first Olympics where you can stream every single event live online, which has created a very interesting, from a technology perspective, challenge of being able to support bringing all that content into the Akamai platform, distributing it out to end users around the country as well as to all [U.S.] territories and military bases simultaneously.”

The second challenge is supporting a massive online library, which offers full-event replays on-demand and a slew of shorter clips.

“The library itself is the largest ever available for an Olympics,” he points out. “Since there’s no other sporting event or sporting activity of the scope of the Olympics, there’s never been an on-demand library as large as what we are creating on an ongoing basis now for Rio.” 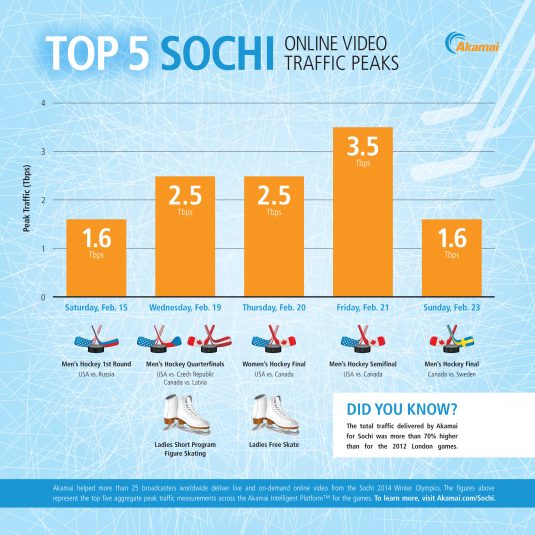 Usage peaks for the 2014 Sochi Olympics

Not only is Akamai delivering much more data overall; it’s also encountering peak-usage periods beyond those during previous Games. During Sochi, it saw a peak usage of 3.5 terabits per second. Only a few days into the Rio Games, Akamai had already exceeded that by more than a terabit per second. Sochi’s peak came during the semifinal hockey match between the U.S. and Canada, on one of the final days of the Games. Rio blew past that during the U.S. women’s gymnastics all-around on day 4, and the peak-usage will certainly go even higher during the final week.

One other figure illustrates what a trial this is for Akamai. Whether they’re watching at home or on their phones, viewers are using stronger online connections than they did for previous Games, so they’re accessing higher-bitrate streams. The average is significantly higher, Bloom says. In fact, the average broadband speed has doubled since the 2012 London Games, allowing far more high-definition streaming.

“We have a huge operation with NBC, taking all of their streams and ingesting them for NBCSports.com and TV Everywhere, and it’s been a huge success so far,” says Joachim Hengge, head of media business development, Akamai. He’s in Rio to help support a number of Akamai clients, including NBC. It’s essential to ensure the online-video experience is TV-like in terms of quality and experience, he adds.

“The challenge,” says Bloom, “is providing the same level of experience, whether it’s a really popular event like the USA women’s-gymnastics tournament finals or something that is less popular, like a qualifying event. End users expect that same experience.”

Akamai’s challenges aren’t just about meeting NBC’s needs. It’s about delivering to rightsholders around the world as well. It encountered a huge range of abilities and architectures. Some markets are mature, whereas others have never offered OTT before and need a lot of hand-holding to create a competitive experience. Akamai must overcome that technical challenge so viewers in each country get the same consistent experience.

“It’s a very nascent market right now. We see a lot of differences in the way that broadcasters, globally, are implementing over-the-top services,” Bloom says. “Being able to manage that variety and manage the technical risk of all those different third-party components — whether it’s different player technologies, different player-development teams, the way that monetization’s happening, the way the business-intelligence analytics are coming out of the player, the client device — is, I think, the biggest technical challenge we face just in terms of complexity.”

As the world’s biggest sports event, the Olympics are far more demanding for CDNs than even the World Cup.

“At the World Cup,” Hengge explains, “there is a massive peak within the two hours of the match, whereas an Olympics is 12 hours a day with peaks in traffic patterns. So the way we have to prepare for it is different. We are generating more petabytes per day.”

Akamai has taken a variety of precautions to ensure that it can meet global demand. Large on-demand libraries put a huge stress on its caching platform, so it worked closely with partners to create a scalable solution, providing offload to protect the libraries. It looked at the full distribution pipe, providing layers of caching and distribution to protect the origin, while also managing the last mile to viewers’ homes.

Prior to the Games’ start, Akamai worked with NBC to create dedicated parts of the Akamai platform just for Olympic-video upload and distribution. It also put provisions in place to enable its massively distributed edge platform to keep a tight alignment between NBC’s encoding partners and Akamai. Bloom estimates that Akamai put in 10,000 work-hours purely in preparation for the Olympics. During the Games, it has teams ranging from four to 80 people providing support at its Broadcast Operations Center.

If this kind of capacity sounds impressive, consider that NBC’s streams top out at 1080p. The numbers will be far higher in two and four years’ time, if NBC adds 4K to the mix. Phone carriers should be happy that wasn’t part of the offering from Rio.

“A lot of people don’t have 4K TVs, but everybody has a 4K device in their pocket nowadays,” Bloom points out. “I think there would have been a lot of consumption of that had it been available. It probably would have stressed the wireless providers pretty significantly.”

Once the Rio Games are completed, Akamai will look to 2018 and 2020 to plan for the growing demand.

“More servers is not going to solve the technology need,” Hengge says. “We will need to solve the gap with technologies like Octoshape on the ingest side and client-assisted delivery or multicast streaming.”