The Phillies broadcasting team of Tom McCarthy, Matt Stairs, and Ben Davis will call the game from a special location at Citizens Bank Park during the Phillies-Dodgers game on Tuesday, August 16.  The broadcast will emanate from an area near Harry the K’s in the outfield. This is the third year the game will be called from a different location in Citizens Bank Park, with the team having done them in the outfield stands, and by the on-deck circle the past two years. 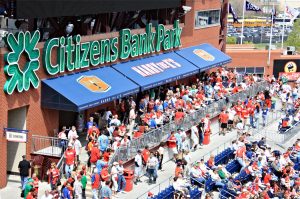 “To be able to broadcast from different parts of the ballpark is such a treat for all of us,” says McCarthy. “Over the last couple of seasons we have been able to absorb the great vibes at the ballpark and enjoy the game with the best fans in baseball. This year will be no different. The perch at Harry the Ks is not only special in name but in atmosphere. This is a great opportunity for us to show off some of the best spots to watch a game. I know I can speak for Matt and Ben when I say we are excited for this baseball moment.”

*This special broadcast is weather permitting.