The 2016 Rio Olympics are proof positive that the social-media revolution is fully upon us, and NBC Olympics is doing its part to ensure that its social-media team makes the most of the Games with efforts on two continents. And, like the athletes themselves, the NBC Olympics team made good use of the Olympic Trials to find a winning form before descending on Rio. 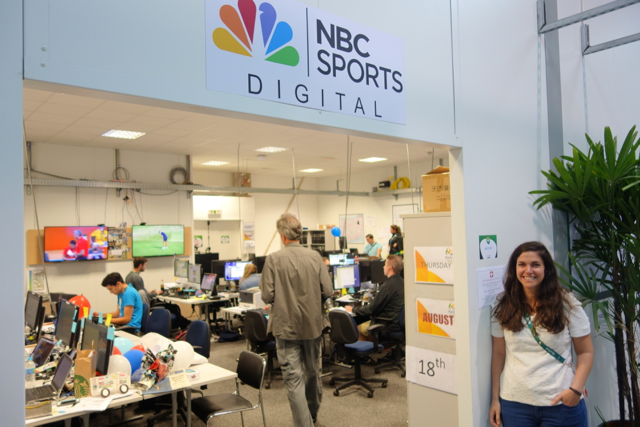 Lyndsay Signor of NBC Sports says social media efforts for the games are paying off.

“The good thing about the Olympics is, we have the Olympic trials to test the interests of the U.S. user, and we found very quickly that people can’t get enough of it,” says Lyndsay Signor, senior director, social media marketing, NBC Sports. “We were testing what were the key things they wanted from us, so, heading into the Olympics, we had a good indication of what kind of things people wanted.”

The NBC Olympics has a social-media team of five people on hand at the IBC in Rio and upwards of 10 people at NBC Sports’ facility in Stamford, CT. According to Signor, the social-media team usually operates as a one-man-band operation handling graphics creation, posting, etc. while the nature of the Olympics and the sheer tonnage of content and social-media opportunities mandated a move beyond one-man bands to everyone having specific roles.

Three members of the social-media team are focused on distribution of video on the various platforms. Three others focus on engaging with the platforms via live tweets, Facebook posts, and more. And then there are three graphics designers, who create various elements that can be put up quickly on the different platforms . An additional team member makes sure to distribute any social-media posts to relevant interested parties, such as a specific sport’s U.S. organization. 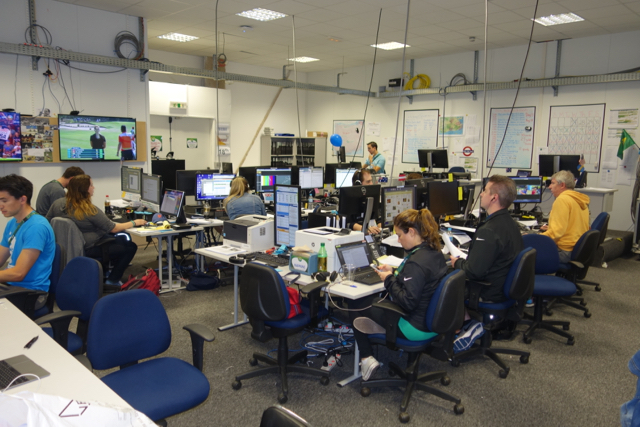 The NBC Sports social-media team onsite is focused on the athletes, competitions, and talent located in Rio.

“Our team here in Rio is really about finding and creating custom content on the ground, like Snapchat at events or with athletes or talent,” says Signor. “So the Rio team is focused on Rio.”

Facebook Live has proved to be a useful tool for athletes and talent alike. The social-media network’s baked-in technology allows users to click on the Facebook Live app and begin streaming live content out via a smartphone’s camera and microphone to their Facebook followers via cellular or Wi-Fi service.

“Facebook Live is a big initiative for us at these Games,” says Signor. “We have found, on the sports side, that there has been engagement when we make use of athletes and talent.”

The social-media team also identified a natural fit for Facebook Live: during the car ride from a venue to the NBC Olympics studios at the IBC. The cars were outfitted with lighting and sound, and Facebook Live broadcasts were able to take place from the road.

“We knew that cellular service might be an issue here in Rio, but, at least for these, we’ve been successful at Facebook Live,” says Signor. “And it’s been the easiest way to do the interviews: anyone from NBC in the car can contact us, and we can deliver it to the NBC Olympics Facebook page. So that was a pretty cool thing we’ve done.”

Meanwhile, farther north (much farther), the NBC Olympics Highlights Factory in Stamford is driving creation of highlights from event coverage and finding clips that will resonate not only with social-media followers of NBC Sports but also with the federations and athletes themselves, who can give content a viral push that can turn it into a phenomenon.

“We like to keep highlights to 45 seconds and under,” says Signor. “Then shorter moments can be ‘gifable.’”

One of the challenges of social media is making sure content for each platform is designed specifically for that platform. For example, a highlights-clip “quarterback” talks to the HLF and helps the team understand how to distribute the content to the various platforms.

The focus for Instagram, for example, is highlights and heavy use of photos, while Snapchat is used around live coverage and on the ground. Facebook, meanwhile, is the place where video does very well.

“If it’s video, we’re publishing it to Facebook, as that dominates engagement,” says Signor. “On Twitter, we’re pushing video and making use of its real-time nature that is more in line with what is on TV.”

The social-media stars of the Games include obvious faces, such as American gymnast Simone Biles (“Anything we put out around her is popular, and she is very active on social media,” Signor points out) and American swimmer Michael Phelps. who is active on Facebook. But there are the less obvious ones who come out of nowhere, most notably Phelps’s infant son, Boomer.

Another one is “Angry Michael Phelps Face,” an image that launched a thousand memes and began simply as video coverage of the swimmer in the warm-up area prior to a race.

“Those are the kinds of things that are unique to the Olympics,” notes Signor, “and give us the ability to have fun and capitalize on moments that are in the periphery of the competition.”