Globosat, the largest pay TV provider in Latin America and market leader in Brazil, is turning to Tektronix to support live IP media production of the 2016 Summer Olympic Games in Rio de Janeiro, Brazil. This represents the first use of IP for live production on this scale in Latin America.

Globosat, which will produce the worldwide content for the 2016 Olympics, plans to deploy 16 linear channels by satellite, and more than 56 by internet amounting to 16 produced channels and 40 channels of audio ambience, for the Games. 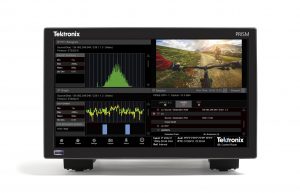 At the center of this massive network infrastructure will be two Tektronix SPG8000A master sync and PTP grandmaster clock generators that offer support for both traditional SDI-based and IP-based media infrastructures. Alongside these instruments will be two Prism IP/SDI media analyzers that offer the unique ability to diagnose and correlate both SDI and IP signal types.

“The move to an all IP-based infrastructure will continue beyond the Olympic Games. However, we also wanted to take full advantage of IP networking technology for this very important event,” says Lourenço Carvano, engineering director of Globosat. “With the help of Tektronix, we are confident in our ability to support a hybrid SDI/IP environment, helping us to both lower costs and deliver a higher quality broadcast to our audience.”

The broadcast industry is at the beginning of a revolutionary migration to an all-IP infrastructure. However, huge investments in existing technology and workflows mean that this transition will take place in phases, creating a need for test and monitoring solutions such as Prism and the SPG8000A that can support hybrid SDI/IP environments.

“Producing the Olympic Games using an IP-based infrastructure is a highly ambitious effort. We have had the opportunity to work with Globosat in other major events such as the 2014 FIFA World Cup and they are clearly committed to ensuring their coverage is as pristine and picture-perfect as possible for viewers,” says Charlie Dunn, general manager, Video Product Line, Tektronix. “By offering solutions designed to support hybrid IP/SDI environments, we are enabling Globosat to take advantage of the latest IP technologies while optimizing the quality of the broadcast feeds coming from the Games for viewers around the world.”