This is Part 2 of SVG’s four-part series on NBC Olympics’ at-home operation in Stamford, CT. Make sure to check out Part 1, an overview of the operation as a whole; Part 3, focused on the “Off-Tube Factory” commentary operation; and Part 4, on the Streaming Factory setup. 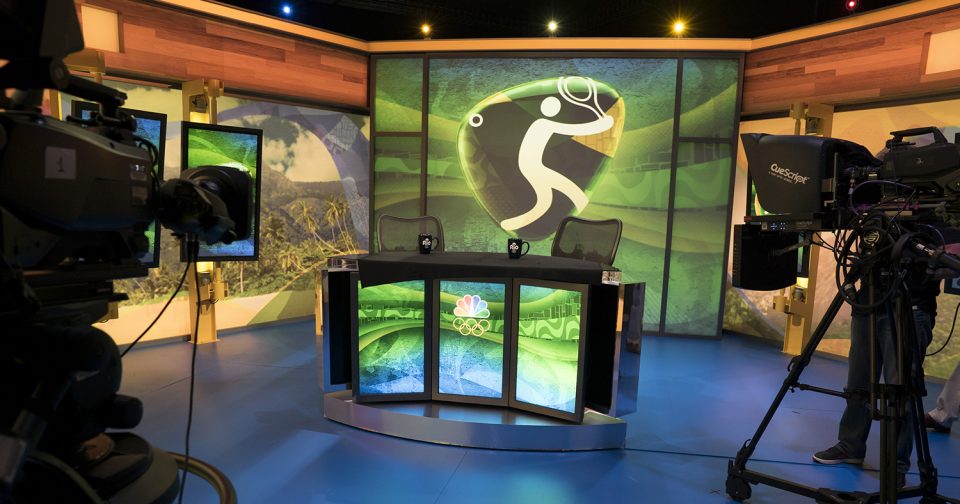 NBC has five studios up and running in Stamford (Photo: Virginia Sherwood/NBC)

“The number of shows that we’re doing from here is massive, and that number is driven even higher when you consider the digital [content],” says Tom Popple, VP, studio operations, NBC Olympics. “[The improvement] from Beijing to London was exponentially huge, and what we are doing here [in Stamford] for Rio is far bigger than that in terms of [studio operations].”

Eight Stamford-based production-control rooms are driving all this content: PCR2 for USA network (Studio 2), PCR3 for MSNBC and CNBC (Studio 3), PCR4 for NBCSN (Rio Studio 2), PCR5 inside NEP’s NCPII truck for tennis on Bravo (Studio 7), PCR6 for Daily Dismount and news-desk updates, PCR8 for Olympic Gold Zone (Studio 1), and a pair of mini control rooms, PCR1 and PCR7, for the basketball and soccer specialty channels.

During its Sochi debut, NBC’s Gold Zone live-streaming product proved to be a hit with fans, providing live looks at critical moments from active venues. For Gold Zone in Rio, NBC Olympics uses a new control room in Stamford, PCR8, which is powered by an Evertz EXE IP router. The ASPEN-based router, which replaces a 1152×1152 baseband router, marks a major commitment to IP in Stamford. 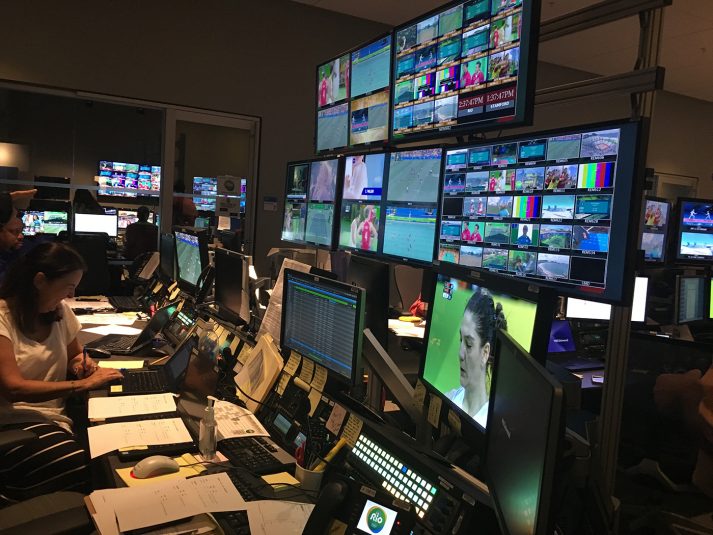 “Right after Sochi,” says Popple, “we saw that, with the path we were going on for routing, we would never make it with the routing infrastructure that we had. We just couldn’t fit everything, so we knew we had to do something. We still had room to grow the baseband router, and it would have been the tried-and-true option. But, when we looked at the IP router, we quickly made the collective decision to go that way because it gives us so much more expandability and flexibility down the road.”

Tim Canary, VP, engineering, NBC Olympics, explains, “We’re using ASPEN technology to extract the audio … and take the transport steam right into MADI for the [Calrec] audio console. That’s a huge change from the other rooms. I’d be remiss if I didn’t say the key to making it work is the ASPEN wrapping format; there’s nothing else that would let us do this in the way that we are doing it.”

PCR8 is fully IP-based from the router to the monitor wall, thanks to the EXE router and Evertz VIP 10G multiviewer system, but video paths are still de-encapsulated back to baseband before hitting the switcher. The remaining IP ecosystem will be expanded down the line.

“In terms of IP, we are in with both feet,” says Canary. “[Installing the IP router] has been challenging, but we felt it was well worth it because we are always trying to stay ahead of what production wants and needs. We’ve learned a lot along the way, but I think, down the road, there’s no question that will be key to our future growth.”

NBCSN Studio in Rio Controlled by PCR4 in Stamford

PCR4, which is live for NBCSN more than 16 hours on most days, is the lone control room located in Stamford but serving a studio in Rio. A 20-input router feeds NBC’s unilateral VandA video signals from each venue to a BlackMagic ATEM 2M/E switcher, which provides a multiview output inside PCR4 and allows the production team to integrate these feeds into the NBCSN telecasts. 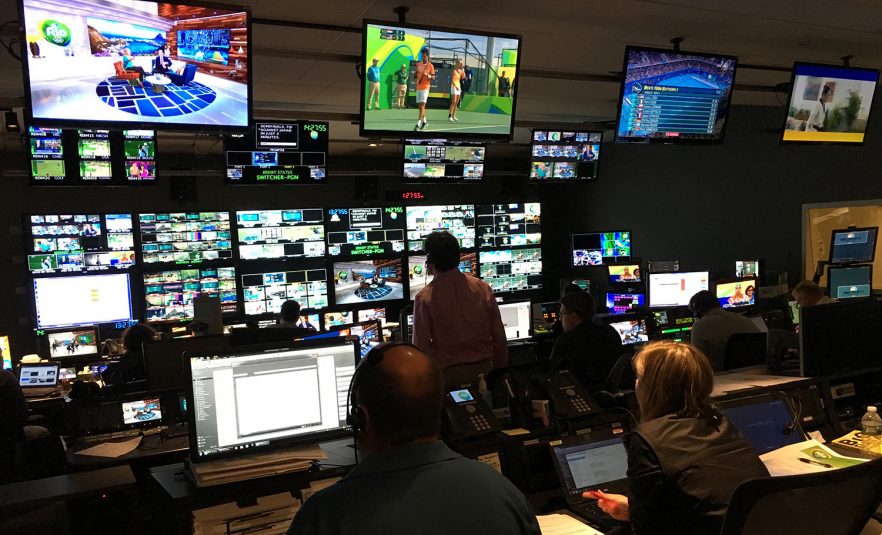 PCR4 is serving as the NBCSN control room, while the studio is located in Rio.

“[Having the control room in Stamford] made it possible to do interviews in Rio, and we thought it was the best option, considering [NBCSN is live] 16 hours a day,” says Popple. “I think we’re going to see