Live From Rio 2016: Globosat, SporTV Is All In for Home Olympics

The Brazilian Olympics fan had no lack of choices when it came to deciding how to tune in for Brazil’s exciting win over Germany in men’s Olympic football and virtually every other sport. Brazilian TV provider Globosat broadcast the action not only on its over-the-air service but also on its SporTV cable channel, for a total 16 channels. And, if that wasn’t enough, it also sub-licensed over-the-air rights to Record and Bandieras and cable rights to Fox Sports Brazil and ESPN Brazil. 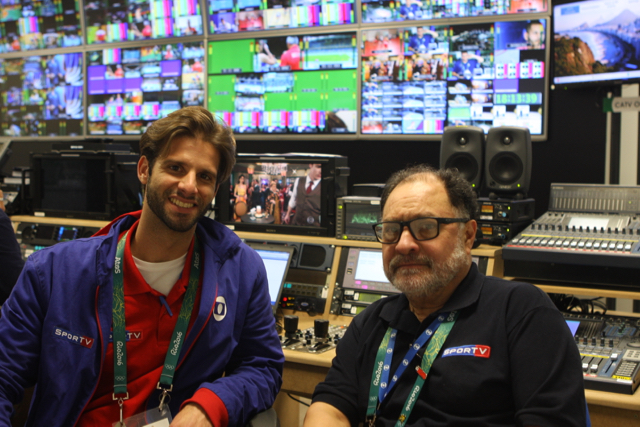 The fact that Globosat and SporTV have sublicensed out the Games to four other entities (all of which are offering the same events) point to its domination in the market. And its IBC presence is just as dominant, with two large control rooms, Avid Media Composer for SporTV and Adobe Premier editing systems for news editing, and a newsroom area, where Globosat and SporTV journalists and producers plan coverage.

A new Globosat offering for the Games is a dedicated news channel. “We’re not just looping news; we have dedicated crews in the field,” says David Presas, executive producer, news and sports division, Globo International. “Wherever there is a Brazilian in any sport, we have a camera.”

Globosat also has deployed five of its OB vans for unilateral productions of such events as aquatics, athletics, and gymnastics. Those vans are connected to the Globosat production center and the IBC via fiber. For other sports, such as judo and basketball, SporTV made use of flypacks. Studio locations were connected via IP, thanks to Lawo’s V__remote4 system for IP transport of audio and video signals. 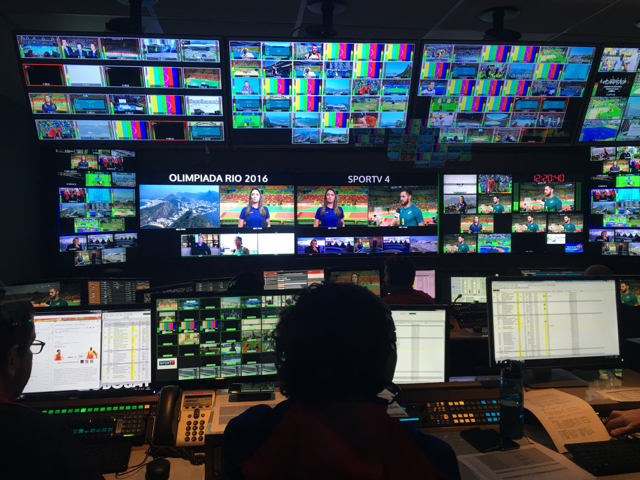 Globosat’s SporTV control room is only a few miles from the Olympics IBC.

Globosat’s main broadcast and production facility is located only a few miles from the Olympic Park and IBC. That meant that, early in its Olympics planning, the Brazilian broadcaster decided to bring as many of the signals available at the IBC to its main production facility. To make that happen, the broadcaster set up 240-Gbps connectivity for the full suite of OBS signal services: the Multichannel Distribution Service (MDS), the VandA+ package with 55 audio and video signals, and the Multi Clip Feed (MCF), which provides super-slo-mo replays, crowd shots, and more. There is also a return circuit from Globosat to the IBC for sending content back as well as IPTV service.

Additionally, the Rio de Janeiro-based cable and satellite company is using Elemental encoding and decoding gear in those efforts. The workflow deploys both HD-SDI and SMPTE 2022-6, a standard for transporting high-bitrate media signals over IP networks, to packetize and deliver 1.6-Gbps streams for each channel over standard fiber, reducing the capital cost of installing multiple dedicated video circuits.

The result is an Olympics workflow that makes use of 21 control rooms: one main control room in the IBC produces the main SporTV channel; the rest, individual sports and events. 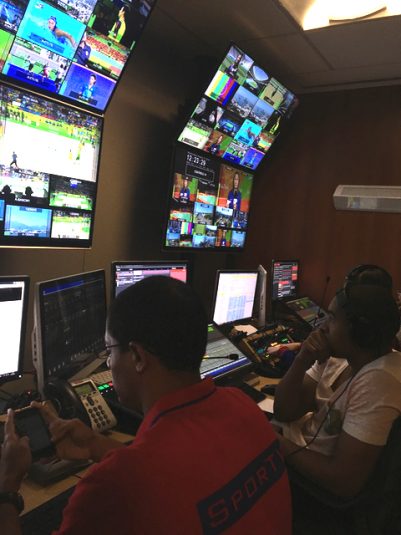 Each channel is running entirely on a Vizrt Viz Opus control-room-in-a-box, which manages live sources, video, graphics, audio, and commercial-break content. Viz Opus has been integrated with Globosat’s IBMS traffic system to manage content for the commercial breaks, using Vizrt’s Showmaker rundown-management tool for Viz Opus to organize and play out the content through the Viz Opus system. At the same time, Showmaker is also exporting and updating the as-run commercial-breaks list in Globosat’s traffic system.

In 2015, the broadcaster installed Viz Mosart studio-automation systems in all 12 production-control rooms at its permanent production center in Rio. All are handling live coverage of the Games and feature real-time graphics and video controlled by the Viz Trio playlist controller, which is played through Viz Engine.

“We needed a fast and efficient way to easily manage the massive amount of content coming in from the Games. This will include video, audio, data, and multiple live feeds for eight of the 16 dedicated channels,” says Lourenço Carvano, engineering director, Globosat. “We’re very confident in Viz Mosart’s ability to manage our existing control rooms, while Viz Opus allows us to use minimal staffing to maintain a consistent graphics design across all of our additional channels, simultaneously feeding live-video streams with local audio and adding custom commercial breaks from a single, cost-effective solution.”

To handle its in-depth archive of programming, Globosat uses Vizrt’s Viz One enterprise-level media-asset–management (MAM) system  to manage its extensive amount of content. For Rio 2016, the broadcaster is using Viz One to manage a huge amount of content for use in its analysis shows. The production teams are using the system throughout production for ingest, cataloging, archiving, and editing. Viz One logging capabilities allow users to enrich metadata by adding new markers, keywords, annotations, and scene descriptors. All of this functionality lets Globosat streamline workflow and helps editors, producers, and journalists find the right files as quickly as possible.

All the video content from Viz One is played live on-air through the same Viz Engine video servers that output graphics from the control room.

Once the content in the control rooms is ready to be sent to viewers and subscribers, Elemental Live software encodes it for live over-the-top delivery (including the Globosat 4K service). Elemental Live also records and trims catch-up TV deliverables for distribution over different VOD platforms, including Net Brazil.