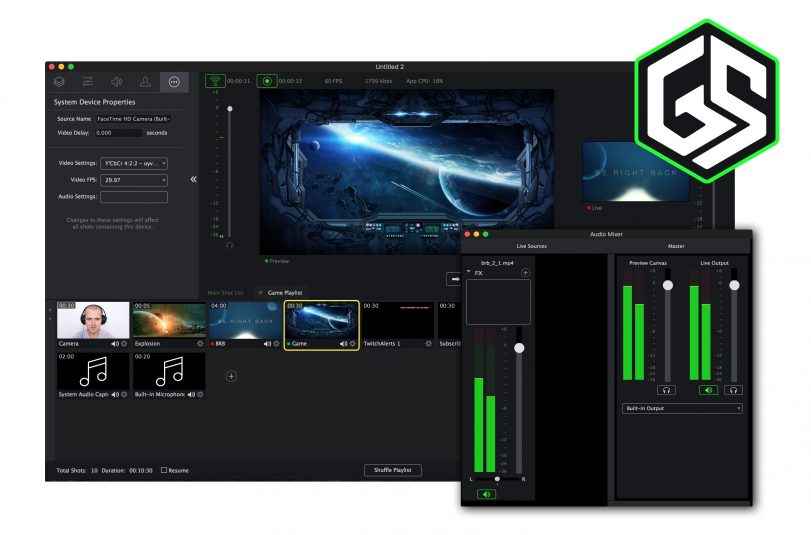 Version 3.0 of Gameshow features production and editing tools designed to give game broadcasters unlimited creativity for producing consistent, branded game streams that bring followers back. Version 3.0 of Gameshow gamecasting software enables video gamers to create professional streams for Twitch.tv, YouTube Gaming and Hitbox.tv. Gameshow’s production controls allow gamecasters to focus on gaming rather than worry about the logistics of broadcasting and production. Gameshow v.3.0 is available immediately from www.gameshow.net where users can also download a free fully featured version, with the only limitation being a visual watermark displayed beyond a certain resolution and bitrate.

“Gameshow is the real deal, pro game streaming software. It truly outperforms the competition in resource usage, ease of use, and quality of its revolutionary features. Add to that a new, fully featured free version, and a new perpetual licensing system where you own the software forever, and Gameshow is poised to be the new king of game streaming,” says Bryce Stejskal, Gameshow Product Manager.

With a few clicks, users can pick and customize game templates, insert graphics, add widgets and even put themselves “inside the game” using the green screen function before streaming to Twitch.tv, YouTube Gaming and Hitbox.tv.

“I love the way GameShow looks and feels while I’m streaming. The layout and display is top notch and shows everything I need. Plus, they have a support team that can’t be beat,” adds Clintus McGintus at Youtube.com/ClintusGames.

Other features in version 3.0 include