The latest project in the virtual-reality partnership between Fox Sports and live VR giant NextVR will see the duo deliver the first-ever VR broadcast of a soccer match, today’s season-opener between Bayern München and Werder Bremen in the German Bundesliga.

Viewers will be able to watch a fully produced feed that will access seven cameras placed in such areas as the stands, along the sidelines, midfield, and behind the goal. 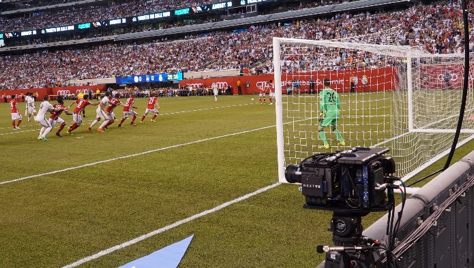 Soccer has notoriously been a very difficult sport to produce in VR, and Fox Sports and NextVR are acknowledging that fact by adding some new elements to help make the experience more immersive and enjoyable for viewers. Among the big additions are a set of dedicated commentators — former Bundesliga player Heath Pearce and Fox Sports soccer commentator Mark Rogondino — and aggressively working in replays.

“These elements [address] those challenges that exist in covering soccer, or any sport when the action can be far away at times,” says Michael Davies, SVP, field and technical operations, Fox Sports. “We acknowledge that people will not be in this experience for three hours and watch the whole game that way. At the very least, what people would want to do is get in the VR experience to live or relive exciting moments of the game. For that reason, we think replay is going to be very important.”

Although the cameras will offer a perspective from right at pitch side or directly next to the goal, providing an incredible level of intimacy with the action, Fox Sports and NextVR are also experimenting with VR-exclusive graphics to help better tell the total story of the action.

An interesting quirk to the experience is that all of the VR cameras will be positioned on the reverse side of the pitch from the traditional television-broadcast cameras in an attempt to stay out of the way of the TV production on a big day like Opening Day. Fox Sports and NextVR are also receiving some production and technical support from Bundesliga’s production arm Sportcast and local broadcast partner Sky Deutschland.

Fox Sports and NextVR are close friends at this point. Friday’s match marks the fifth major event in 2016 that they have produced together, following the Daytona 500, a Premier Boxing Champions (PBC) title fight, the Big East college basketball tournament, and the U.S. Open golf championship. The partnership is a cornerstone of the Fox Sports Lab initiative, which is designed to explore new technical partnerships.

Davies believes that VR has come a long way this year and that, as consumer devices continue to advance, the engagement level will climb.

“We’re refining, a little bit, what this experience is,” he explains, “but we also acknowledge that VR takes a lot of shapes and forms. When you look at things like 360 video, head-mounted VR, there’s a lot of different flavors.

“We are looking forward to the improvements [in consumer devices] that will be coming,” he continues, “and those will drive more of the consumption that we want for these types of things. Every event that we do, we see more and more viewers, but this is still a relatively small audience.”

To watch the VR presentation of the match for free, access the Fox Sports portal on the NextVR platform, currently compatible with Gear VR headsets. For detailed instructions, go to NextVR.com/GO.