In 2013, following a stretch of rain-drenched US Opens, the United States Tennis Association set in motion a three-phase plan to build a retractable roof over Arthur Ashe Stadium. As the 2013, 2014, and 2015 tournaments came and went, a massive structure slowly grew on the Flushing Meadows campus. Today, in time for the 2016 US Open, the roof is complete and ready to wow, come rain or come shine.

The roof structure surrounds Arthur Ashe Stadium with nearly 7,000 tons of steel and supports two retractable panels weighing a combined 800 tons. Because there’s a 15-ft. space between the roof structure and the top of the stadium, the USTA installed 54 “garage doors” that can be opened to allow a summer breeze or closed to shut out inclement weather. 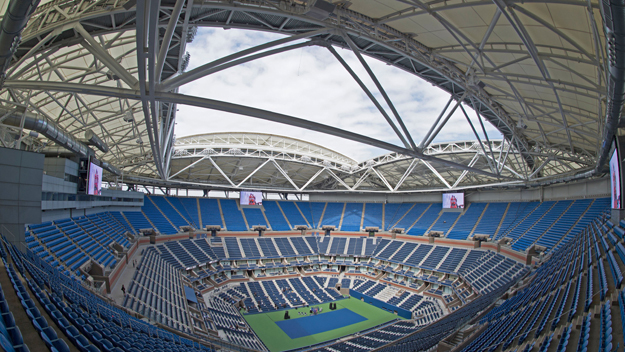 “The roof had to feel as if it architecturally fit with the structure of the stadium itself,” explains USTA COO Danny Zausner. “It couldn’t just be some albatross that’s lying on top of it. It far exceeds my greatest expectations for how it seamlessly fits into the design of the actual stadium. For those who have never been out here before, they would be hard-pressed to imagine that it wasn’t built with the stadium.”

Following the 2015 US Open, fabric skins were added to the fixed and retractable portions of the roof, the mechanization that opens and closes the roof was installed, and the air-conditioning system was added. Air-conditioning will be used only when the roof is closed and the garage doors are sealed.

Throughout construction, the USTA estimated that the roof would be able to open and close in seven to 10 minutes. Now that the roof is complete, the time is actually closer to six minutes. The roof is intended to provide scheduling consistency for the tournament and eliminate rain delays and postponed matches, particularly in the later rounds. Zausner expects that opening and closing the roof will cause minimal delay and that fans and players alike will stop to watch.

“It’s incredibly quiet,” he points out. “The irony is, it certainly would be possible for the players to continue playing even while the roof is opening and closing but it’s actually quite the spectacle. Everyone in the [stadium] — including the players — would be looking up the whole time, watching it happen, so I think the players will stop playing for a while.”

The retractable roof over Arthur Ashe Stadium isn’t the only new feature that tennis fans will find at the USTA Billie Jean King National Tennis Center. A brand-new Grandstand was constructed in the southwest corner of the campus; with 8,100 seats, the new venue will be slightly larger than its predecessor but will still retain the original’s charm and appeal.

“The existing Grandstand, which has served us well since the USTA got here in 1978, was built for the 1964 World’s Fair, so, at 50-plus years old, it has kind of outlived its useful life,” Zausner points out. “We wanted to replace it in kind, meaning that everything the fans love about it and the players love about it — it’s sunken in, it’s very tight, fans are right on top of the action, there’s a lot of shade there — we moved to the new Grandstand.”

The new Grandstand will also benefit from new videoboards, broadcast infrastructure, LED court lighting, concession stands, and retail stores. The old Grandstand, which will be referred to as either “old Grandstand” or “P6” during the 2016 US Open, will be used as the sixth practice court for this year’s tournament. It will be torn down, along with Louis Armstrong Stadium, following the tournament, and construction will begin on a new Louis Armstrong Stadium on the combined Armstrong/Grandstand footprint. The new Armstrong, which will also feature a retractable roof, will be completed in time for the 2018 tournament.

The area between new Grandstand and Court 17, which features 10 field courts, was completely gutted and rebuilt. Courts 10 and 13 are now centered on the axis connecting the Unisphere and Arthur Ashe Stadium with a 40-ft. walkway in between; with a permanent broadcast tower now in place, each will be used as a broadcast court.

In addition, the USTA has replaced the existing alphanumeric scoreboards in each of the field courts with videoboards and has replaced all metal-halide lighting with LED. Looking forward to 2018, the USTA intends to be able to show instant replay on all courts and to have transitioned every court into a broadcast court.

“We’ve got so much more open space and trees and everything like that, so I think, from a fan perspective, they’ll barely recognize the site,” says Zausner. “It’ll just look much better than it’s been in the past, as much as they enjoyed it in the past. Many people know about the roof, and that’s what they’re coming out here to see, but they’re going to find out that the roof is just one out of three significant projects that have taken place.”