With the introduction of the NewTek IP Series, NewTek is rethinking how video production is done while unleashing the full power and promise of IP. The modular video-production system is intended to break the barriers on access to video sources and video-mixing options in the production environment.

Built from the ground up to take full advantage of modern IP infrastructures, the NewTek IP Series is based on NewTek’s popular Network Device Interface (NDI), which was introduced around this time last year prior to IBC. With NDI, the NewTek IP Series — which is backwards-compatible with SDI — allows multiple video systems to identify and communicate with any other system over a standard network. 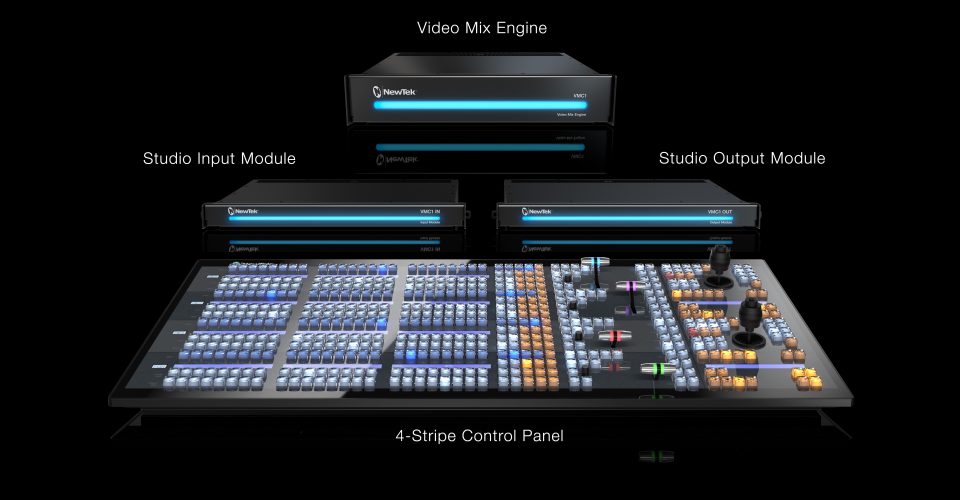 “It’s a different way of thinking about how video production is done,” says Will Waters, director, product marketing and sales enablement, NewTek. “It really starts to take advantage of what IP has promised in terms of flexibility.”

The NewTek IP Series software enables users to greatly expand capabilities and expand workflows and make a steady transition to an IP environment instead of an abrupt jump out of the SDI environment.

At the heart of the system is the NewTek VMC1 Video Mix Engine, which is capable of switching 64 source channels, including 44 external inputs (each with key and fill) and full mixing control with 8M/E with full reentry, plus PREVIZ. NewTek describes it as the “modern video switcher” because it can handle all these various sources while being able to support multiple resolutions, including up to 1080p and 3G — an important feature for live sports productions.

“At NewTek, we like to innovate, we listen to our customers quite a bit, and we have a lot of sporting customers,” says Waters. “One of the things that’s always stood out [in the marketplace] is that we make a great integrated all-in-one solution. When you get to a certain size of production, inputs always become a factor. Telling a story always has to be at the forefront of any technology. A lot of that is having all of the sources that are brought together within a production.”

Also a part of the system are the NewTek VMC1 4S control panel and the NewTek VMC1 IN studio input module. When paired with the VMC1 Video Mix Engine, the VMC1 control panel offers four independently assignable stripes and hardware mechanics designed to ensure optimal live performance. The Studio Input Module, meanwhile, allows up to four SDI or IP inputs per module to be recognized by the Video Mix Engine. Modules can be added anyplace from anywhere on the network, allowing the flexibility to increase the number of sources as needed.