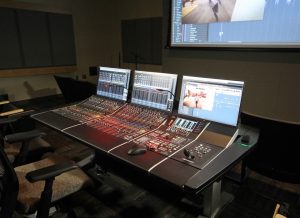 Kyle P. Snyder, Lecturer and Outreach Coordinator within the School of Media Arts & Studies who has a long history of system design, initially began to research a new state-of-the art system, one that was more appropriate for an educational environment than their previous system and one that could handle the ever-increasing influx of students within the music production curriculum.

“Looking around initially at other controllers that would work with ProTools, I stumbled upon NUAGE which remembered from when it was first launched at AES by Yamaha,” states Snyder. “It had a great presence, and I thought it would be a very interesting work surface though I was concerned about its reliance upon Nuendo. However, as I continued my research it became evident that the most important decision was our software platform for teaching. We made the decision that adopting Nuendo as an editing platform, which isn’t necessarily normative but is absolutely the superior tool was the way to go. This allows us to focus more on technique, backed up by the trademark Yamaha stability that NUAGE brings to the table.”

Snyder said the Yamaha Steinberg sales representative offered to send over a demo system and came out to assist with their tech expertise when necessary. “I was blown away by how easy it was to set up,” Snyder says. “Just knowing things were going to work easily was critically important. With the help of a few students, we set up the NUAGE demo unit within 5 minutes. The system is a game changer for post sessions making them very easy. I was very impressed with how Yamaha and Steinberg developed the system. Working with everyone at Yamaha has made it so much easier and helped us through the transition process. This is the kind of corporate support you just don’t see often.”

The 16-fader NUAGE system is installed as part of the Immersive Media Initiative (IMI) within Ohio University’s Game Research and Immersive Design (GRID) Lab. The IMI was created for students to produce game and virtual reality content. These same students are also shooting video in 360—they have already produced a 16-minute short film–using green screen for motion capture, and more. “There is absolutely no better software for creating audio for virtual and augmented reality than Nuendo,” notes Snyder.

In both the large lab and singular studio, Nuendo works nicely; several students can be in front of the system in the studio and with the added Nuendo seats, the others can work over the network down in the classroom lab and send their part of projects into the studio, adding in vocals, dialogue, and sound effects. The class as a whole can be working on different projects through to the final mix stage, thanks to the Nuendo network.

With their critical listening classes, Snyder said faculty are very excited about the capabilities of the system and can feed RDL Format-A via Dante right out to every desk. Using Radio Design Labs RDL TP-HA1A stereo headphone amplifiers for personal listening purposes, classes can listen via their own headphones and playback from NUAGE via headphone amps at their own pace. “NUAGE is very much what previous products we’ve owned were trying to achieve, so we are really proud to finally be able to offer this superb monitoring and networking environment to our students with our new Dante systems. NUAGE with Nuendo work extremely well, very seamless. It’s really something else.”