Ten industry legends will be inducted on the evening of Dec. 13 at the New York Hilton

The Sports Broadcasting Hall of Fame 10th annual class was announced today and will once again honor sports-broadcasting legends from across the wide range of skill sets and professions that helped create today ‘s sports and media industry. The induction ceremony will be held at the New York Hilton Hotel on the evening of Dec. 13, 2016. 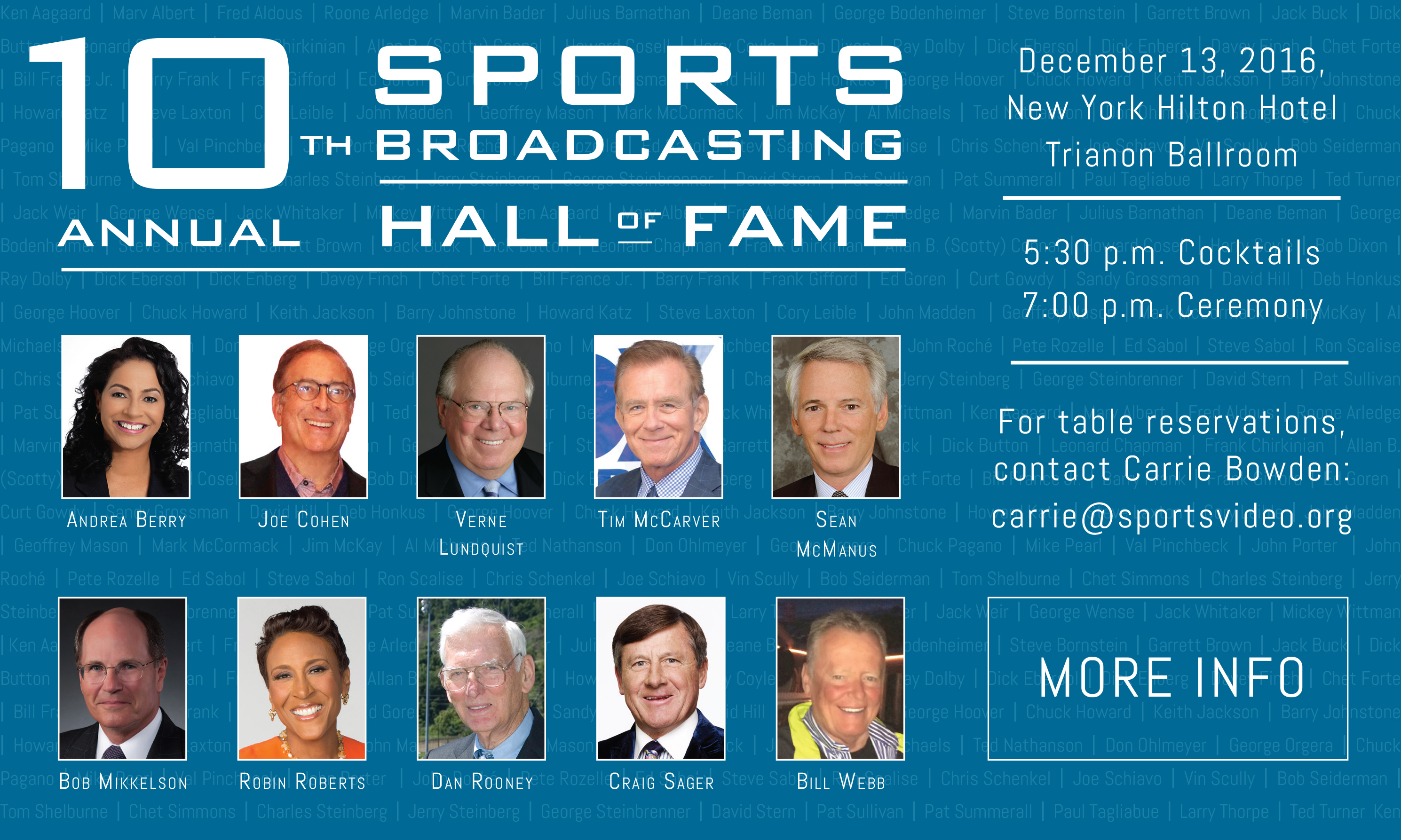 “The 2016 Sports Broadcasting Hall of Fame marks our 10th anniversary as an organization that shines a light on the people who have helped elevate the sports-broadcasting industry week after week and year after year with visionary leadership, first-class creative talent, and technical-skill sets,” says Ken Aagaard, chairman, Sports Broadcasting Hall of Fame. “This year’s class continues that tradition, and their induction later this year promises to be an event to never forget.”

All ticket sales from the ceremony will be donated to the SVG Sports Broadcasting Fund, a charity that helps sports-production professionals during times of financial crisis due to illness, injury, or disaster.

Sean McManus: Twenty years ago McManus was named president of CBS Sports, beginning an amazing run of leadership that not only included bringing the NFL back to the network in 1998 but also inking long-term contracts for top sports properties like the NCAA Division I Men’s Basketball Championship, the PGA TOUR, The Masters, SEC football, the PGA Championship and much more. He also spent five years as president of both CBS Sports and CBS News, only the second person ever (Roone Arledge was the first) to do so. McManus was named Chairman, CBS Sports, in 2011, overseeing operations across all sports properties.

Verne Lundquist: Lundquist’s warm style, laughter, and knowledge have made him a well-loved announcer among his fellow professionals and millions of sports fans. He has been on the national sports stage since 1974, and, although he soon begins his final season calling SEC football games for CBS Sports (something he has done since 2000), he will continue to delight fans of golf and college hoops on CBS Sports into the future.

Tim McCarver: McCarver spent three decades as baseball’s premier television analyst, the only MLB analyst to have worked for all four major broadcast networks. He also served as an analyst for 28 consecutive MLB postseasons, including 23 World Series and 20 All-Star Games. During his career, he became known for prescient insights into the game and was a role model for ex-players looking to fold into a broadcast telecast.

Robin Roberts: Roberts began her career on the national broadcasting stage in 1990 when she joined ESPN, quickly becoming a mainstay on SportsCenter. But her skills and depth as a reporter and anchor soon led her to a role as a cross-network star. Appearing on both ESPN ‘s SportsCenter and ABC ‘s Good Morning America, she was hired as a full-time co-anchor of the latter In 2005 and has been steady presence as the show climbed to the top of the national morning-news ratings.

Craig Sager: Sager’s presence has become synonymous with big-time NBA basketball (not to mention with unique style). As a sideline reporter for the NBA on TNT for nearly two decades, he has earned the respect of players, coaches, and viewers. He previously hosted Atlanta Hawks telecasts for TBS Superstation and was a reporter on TNT’s NFL pregame, halftime, and postgame from 1990 to ’97.

Andrea Berry: Berry blazed a trail as the first female field tech manager at CBS in the mid ’80s. She has been at Fox Sports for 20 years, having joined the company in 1996 as VP, field operations, overseeing operations for NFL, NASCAR, MLB, boxing, NCAA, and much more. As SVP, broadcast operations, she was responsible for all Fox broadcast operations and transmission that support the Fox network, as well as all its cable entities.

Joe Cohen: Cohen’s career highlights include serving as president of MSG Network from 1979 to ’85 (and driving its launch of an HD service); being a co-founder of the USA Network, Sports Channel L.A., and Sports Time Ohio; developing a means to secure a pay-TV signal from piracy while CEO of HTN in the late ’70s; serving as chairman of the L.A. Kings from 1993 to ’95; and today serving as president of sports at The Switch. He also oversaw MSG Network operations when it absorbed Fox Sports New York in 1989, making MSGN the home of all New York-based MLB, NHL, and NBA teams.

Bob Mikkelson: Mikkelson singlehandedly changed the way golf is covered, with the use of one blimp shot. He has the uncanny and not-to-be-duplicated ability to follow a golf ball from a moving platform, operating a pan, tilt, and zoom camera while telling the pilot where to fly so that his shadow isn’t in the shot. As a result, he captures a shot no one else can, giving the viewer the perspective of where the ball is relative to the hole. But capturing golf is not his only primary skill; he has provided a template for covering college and NFL football from above.

Dan Rooney: Rooney, now chairman of the Pittsburgh Steelers, has spent a lifetime making the franchise one of the most successful in all of sports. But he is also a key architect of the current NFL, including helping define the salary cap and the collective-bargaining agreement of 1982. By early 1969, he was managing the day-to-day operations of the team and personally hired coach Chuck Noll. During his time overseeing the franchise, it has won six Super Bowls.

Bill Webb: Regarded as baseball’s top director, Webb calls the shots for Fox Sports’ biggest major-league events. Starting with the launch of Fox MLB in 1996, his credits include 17 World Series, 19 League Championship Series, and 18 All-Star Games. Fox MLB coverage has garnered 30 Sports Emmy Awards, 12 for production, with Webb in the director’s seat. In 2006, he was named lead director for New York Mets games on SportsNet New York, a position he still holds. He also served as lead director at ABC Sports from 1988 to ’96.

The Sports Broadcasting Hall of Fame ceremony will begin with a cocktail reception at 5:30 p.m. followed by the ceremony at 7:00. Tables and individual tickets can be purchased by contacting Carrie Bowden at 917-446-4412 or via e-mail at carrie@sportsvideo.org.