Kingsmen fans, players, and coaches will experience a new addition to game day when they head to events at William Rolland Stadium as Daktronics has designed, manufactured and installed a new LED video display system for California Lutheran University in Thousand Oaks, CA. 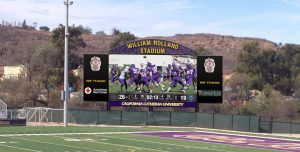 The display is the largest football display in the Southern California Intercollegiate Athletic Conference (SCIAC) and one of the largest displays in all of Division III football at 400 square feet. It will also be used for men’s and women’s soccer games as well as special events such as commencement.

“This video display will make the fan experience more exciting and engaging,” says Daniel E. Kuntz, Cal Lutheran’s director of athletics and head men’s soccer coach. “The dynamic graphics and capability for instant replay and pre-produced and live video should pump up the energy in our stadium even higher.”

Located in the end zone of the field, the video display measures approximately 16 feet high by 25 feet wide and features a 15HD pixel layout to provide excellent image clarity and contrast with wide angle visibility to appeal to every seat in the stadium.

The display is capable of variable content zoning which allows it to show one large image or to be divided into multiple windows to show any combination of live video, instant replays, game information and statistics, graphics and animations, and sponsorship messages.

“We’re excited to partner with California Lutheran University on this video display project for their stadium,” says Eric Cain, Daktronics sales representative. “This will be a great addition to their game-day experience and we look forward to seeing it having an impact on multiple sporting events held at the facility beginning this fall.”

The project was funded by donor William Rolland and Cal Lutheran.