Sony has announced a number of recent deals, including its use in the mobile production unit shared by ARD and ZDF at UEFA EURO 2016 this summer. The German public broadcasters deployed Sony’s flexible ICP-X7000 panel to operate the XVS-8000 multiformat video switcher, which was also newly acquired. 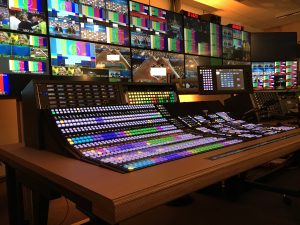 Andreas Berghaus, product manager, live production and systems, Sony Professional Solutions Europe, advised ZDF on which equipment to select for the truck: “The mobile production unit has particularly high production requirements in terms of ease of use, flexibility, and reliability. I am therefore particularly pleased that we were able to meet the high expectations of the ARD Group and ZDF with our solution comprising high-quality technology, future-proof interfaces, and our service available onsite from Sony.”

CTV broadcasts about 140 days of live cricket for Sky per year, covering all domestic County Cricket in England — including the Twenty20 and 50+ competitions — as well as all England’s international test matches and one-day internationals.

According to Hamish Greig, director, engineering, CTV, it is paramount that the company’s OB trucks are equipped with the latest state-of-the-art technology.

“We were so impressed with the cameras as the image quality is absolutely fantastic and really brings the cricket to life, whatever the setting,” he says. “From a functionality perspective, the cameras have been really easy for the team to just run with. The menu configuration is almost the same as the previous HDC-1500’s, making the transition very simple for the operators. Any further restocking we do will be with the HDC-4300; it’s undoubtedly our camera of choice.”

Radio Televizija Republike Srpske (RTRS), a regional public broadcaster in Bosnia, has picked Sony’s Media Navigator and Optical Disc Archive (ODA) as pivotal components in its future-proofed, IT-based workflow. The installation, part of the construction of its new studios, is the second part of a two-phase, three-year project, in which RTRS is expanding its production system to complement its existing Sony SONAPS and LTO solutions to complete its end-to-end program-production workflow. RTRS picked the Media Navigator and ODA solutions not only because of their ease of integration but also for the efficiencies the solutions will deliver for its team working in a busy media-broadcast environment.

The large upgrade project plays an important part in ensuring that RTRS maintains its position as one of the leading regional public broadcasters in the Republika Srpska region, broadcasting television and radio content, such as national news, sport and TV dramas, to a wide-reaching audience. Sony’s heritage and experience within the broadcast industry meant that it was a clear choice for RTRS, which was keen to reflect the ability to adapt and evolve in the changing media landscape in its optimized workflow.

Sony and local partner Kompani DigiTV won the project to introduce a 90-slots library to expand its archive, which was previously based on LTO tapes, with Sony’s ODA to provide scalable, reliable, and secure data archiving for its busy teams. In the second half of this project, the two companies install the market-leading Media Navigator at the heart of RTRS’s workflow, driving the broadcaster forward with reliable, future-proofed features.

The new library will serve both Media Navigator and ODA, migrating the whole system to a new platform and helping drive automation for the broadcaster. The technology upgrade was essential for RTRS, not only to provide more-streamlined processes but to help support any skill gaps in the compact team and to utilize all available resources efficiently. With the introduction of this new technology, RTRS can ensure that it self-sufficient, an essential capability in the current media environment with increasing demands for new functionality, such as the recent national upgrade to HD broadcasts in the region.

“We’re delighted to announce that RTRS has continued the upgrade of its IT-based system with Sony’s solutions, completing the end-to-end workflow of media-asset management and archiving management with Sony’s Media Navigator and ODA solutions,” says RTRS CTO Boris Babic. “We recognize how important it is to continue to drive operational efficiencies in a regional broadcast teams, not just the larger organizations, and look forward to continuing to equip RTRS with new technology over the coming years.”