Vizrt arrives at IBC 2016 on a high. The company played a key role in making sure Brazil’s Globosat delivered thousands of hours of Olympics coverage to viewers, thanks to Viz Opus;  has a new CEO, Michael Hallén; and next month will launch Viz Story, arguably the company’s most eagerly awaited new product in some time.

“We had a Viz Story tech preview at NAB, but it will be shipping in October, and there is a tremendous amount of interest in the market from customers,” says Vizrt CDO Bernt Kare Johannessen. “And it ranges from broadcasters to new media to print as the use of video in social media is completely exploding in terms of how much is being produced and consumed.”

Viz Story enables journalists to quickly and easily create stories for online and social media. The system is an end-to-end workflow for repurposing and creating new content in broadcast quality. Users can edit video as content is being ingested, add state-of-the-art 3D graphics to video timelines, and publish directly to Facebook or any other online and social-media targets, to FTP, and to local folders, all from the same  browser-based interface. 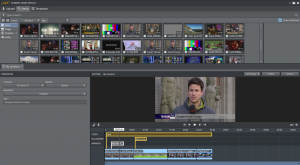 The Viz Story main interface has an intuitive design and easy-to-use content creation and publishing tools.

“It’s not just about video on one or two platforms,” he explains. “There are different ways to engage the user, and you need to tailor the content and message and how it is presented.”

Video assets created in Viz Story can also be added to Vizrt’s media-asset–management (MAM) solution. In Viz Story, users work with templates for quickly producing videos with enriched graphics. The templates give the journalist a fast way to add text and define the style of Text On Video (TOV) content. Graphics are rendered in real time by Vizrt’s 3D-graphics–rendering system, Viz Engine.

“Content producers for YouTube, Facebook, and other online media platforms need a way to get their content online as fast as possible but still have a lot of editorial control over the content to create a professional product,” says Vizrt CTO Petter Ole Jakobsen. “Viz Story allows journalists and content creators to create new or repurpose existing video with new graphics and custom resolutions, like Facebook’s square video, or edit new content from the field, add graphics and voiceovers, and send them immediately to their desired online platform.”

Also on display at the company’s IBC 2016 booth is a demo of full support for Facebook Live, which allows the Viz Engine to stream content directly to Facebook (complete with integrated broadcast-quality graphics), a virtualized Viz Engine running on a public cloud service, and a Nokia Ozo 360-video rig that is being used to shoot 360 video and then demonstrate how Vizrt graphics and telestration can be integrated into the 360-video environment.

Federated search simplifies centralized content playout and makes sharing content easier across different regional and national offices and archives. It can also establish a dedicated disaster-recovery site and connect relevant departmental systems. The federated search is based on the powerful Viz One API and allows each site to operate independently with its own system and still be able to search and retrieve content seamlessly from other Viz One systems. 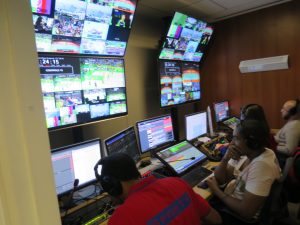 Globosat in Brazil relied on multiple Viz Opus control systems for much of its Olympic event coverage.

The Viz Story main interface has an intuitive design and easy-to-use content creation and publishing tools.

Also on display, Viz Opus enables one journalist to prepare the live-show rundown and drive the entire production of a live news show, with no need for dedicated technical operators in the control room. A journalist can easily build a rundown in the newsroom-control system (NRCS) or use Viz Opus’s rundown-creation tool, Showmaker. During live production, the entire rundown — lights, audio, and graphics and video transitions — cam be controlled from the anchor position with a remote or keyboard. The easy-to-set-up workflow can be used for production of live and non-live content for multiple platforms, including VoD and online channels, such as Facebook.

The SDI workflow captures the program using Vizrt ingest tools, recording to the Viz One MAM system. The recording can be scheduled so that the operator can focus on other areas of the production. “This new journalist-driven workflow is an ideal way to create and deliver content for one-man shows,” says Jakobsen. “It’s easy to set up, can be used on a live or recorded small-scale show, has professional tools for clipping and adding in graphics, and delivers to multiple platforms with or without commercials.”

Also being showcased is enhanced support for Adobe Premiere Pro Creative Cloud (CC). The Viz One panel is a simple tool for bringing content into Creative Cloud from any storage platform, providing editors with full access to media in Viz One.

The panel allows users to quickly search and preview any type of content in Viz One before easily dragging it into the Adobe Premiere Pro CC editing environment. The panel offers significantly faster turnaround time by integrating Adobe Media Encoder CC and storing media in Viz One during the render process. When it is used with online editing workflows and SAN Storage in Viz Engine, the improved workflow provides customers with an extremely fast end-to-end solution for editing and playout.

New for IBC 2016, the Viz One panel automatically stages content when material is added to Adobe Premiere Pro CC. Users can monitor active media movement from the LTO archive and other locations to a central shared storage. Search in the panel has also been extended to support profiles, which can automatically filter for rights clearance or particular media types.

“The Viz One panel gives media companies with shared editing environments an easy-to-use, native interface for accessing content on their archive and central storage within Adobe Premiere Pro,” says Sue Skidmore, head of partner relations for professional video, Adobe. “Integrations with Viz One expand the toolset for our customers and make it easy for broadcasters to integrate the Adobe video tools into their infrastructure.”

In addition, the same graphics that are used by editorial staff online and on-air can be created and edited at any point in the production pipeline, thanks to a new Vizrt Graphics Plugin for Adobe Premiere Pro CC. Editors can access the same selection of graphics templates as the journalist in the newsroom. Using Vizrt’s Metagraphics workflow — a non burnt-in workflow for adding graphics to a video timeline — editors can now store their graphics alongside newly edited video and save both to Viz One.