SportsNet LA is making use of Advanced HDR by Technicolor

Time Warner Cable Sports has taken the plunge into high dynamic range (HDR): its network-operations center is now HDR-capable, thanks to Technicolor technology that can take an incoming standard-dynamic-range (SDR) signal and distribute it as SDR and HDR in one stream.

“What we have found is that, for low financial lift, we can create a signal with a minimal amount of bandwidth increase on the cable plant,” says Mark Coleman, VP, engineering and operations, Time Warner Cable Sports. “And it also doesn’t impact the look of the standard HD signal.” 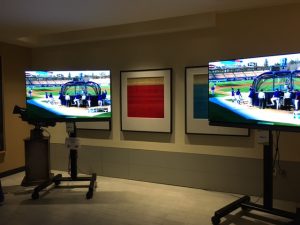 It was only a little over a year ago that Time Warner Cable Sports tackled a Los Angeles Lakers game in 4K (the first time the Sony HDC-4300 4K cameras were used in an actual professional sports event) distributing the signal across the entire ecosystem, from venue to home. So it only made sense for the team to once again tackle a production challenge. This time, it was taking a 1080i SDR signal and upconverting it to HDR.

“HDR is the most intriguing thing to us right now,” says Coleman. “We wanted to see if we could take it to the next step and actually do something live and simulate transmitting it to a home. So we started to think about doing something with the Dodgers and Major League Baseball.”

Those conversations extended out to Technicolor and to Roy Stewart, VP, business development and partner relations, Technicolor. The result is that SportsNet LA is making use of Advanced HDR by Technicolor, which uses algorithms and metadata to take an SDR signal and distribute it as both SDR and HDR in a single feed.

“Hidden in SDR content are details that our algorithms are able to bring to light,” says Stewart. “You may not be able to see these details on an SDR display, but, through our advanced technology, the content is brought to life with new detail throughout the images from highlights to shadows, while maintaining the integrity of the flesh tones.”

The technology can be applied at different places in the production and distribution chain. In this instance, Technicolor’s algorithms reside at the SportsNet LA network-operations center in El Segundo, CA.

The workflow begins by taking the feed from the production truck as either a JPEG2K signal at 200 Mbps or an MPEG4 signal at 30 Mbps via the TWCSport’s 1-Gbps fiber backbone. It goes into master control, where all of the interstitials, graphics, and archival content are added in SDR. The signal is then taken through Technicolor HDR ITM, upconverted to HDR, and deconstructed, through Technicolor HDR, into SDR plus HDR metadata. The video is encoded by an Elemental HEVC encoder, and the metadata is inserted into standardized SEI messages.

The single Technicolor HDR HEVC stream is sent out over TWC’s 10-Gbps backbone to TWC’s Peakview, CO, facility and then distributed over the internet via a Zixi platform (providing forward error connection) to Technicolor in Los Angeles and Technicolor in New York (and soon to Major League Baseball headquarters), where set-top boxes play the content Presented in Technicolor HDR to both HDR and SDR TVs.

“It even gives a little bit of a bump in quality to some of the old footage,” Coleman says. He adds that there are certain points that need a little bit of finessing: most notably, camera shading in bright daylight. “We need to work with the shaders to ensure we are protecting the detail in the highlight areas. We also want to talk with Sony about integrating 4K HDR cameras into the production, creating a hybrid workflow.”

In an interesting observation, he notes, “When we run tickers, branding elements, and graphic boxes through the Technicolor HDR ITM, they pop out of the screen even more.”

Even the derived REC709 video can look better after being upconverted to HDR because it exposes more details and mid tones.

“One of the great things about baseball is, it lends itself to those details,” says Stewart.

Coleman points out that the system is up and running on a 24/7 basis. “We want to keep playing with it and get more eyeballs on it, so we don’t see any reason to take it down.”