Nearly two years ago, the University of Notre Dame embarked on the most ambitious building campaign in its 174-year history. Today, the Campus Crossroads Project is well under way in South Bend, IN, and, when completed next year, will unite academics, athletics, and student life. 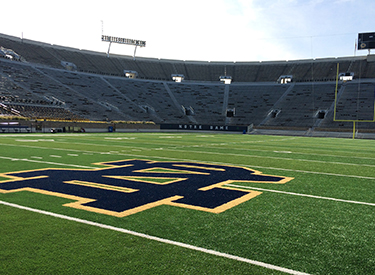 “It is a massive undertaking by the university,” says Scott Rinehart, broadcast technology program director, Fighting Irish Media, which will move into its new home — a state-of-the-art media center — next August. “It’s a media center that takes the Fighting Irish Media mission of telling the story of Notre Dame through the lens of athletics and expanding it to all of campus. We’re supporting non-athletic events today, but this just takes it to a whole other level.”

The media center will be located on the first floor of the complex’s east building and operated by a newly formed group called Notre Dame Studios, reporting to the university’s Office of Information Technology. The 18,000-sq.-ft. facility will support all facets of Notre Dame media production. From digital content in support of academics and faith-based initiatives to production of the videoboard shows in Notre Dame Stadium, Purcell Pavilion, and Compton Family Ice Arena, it will be a resource for students, faculty, and staff.

Although Purcell Pavilion (basketball and volleyball) and Compton Family Ice Arena (hockey) already have videoboards, next year, Notre Dame Stadium will feature video as part of the game-day experience for the first time. Notre Dame, in partnership with ANC Sports, will install a Mitsubishi Diamond Vision videoboard at the south end and ribbon boards along the east and west facades. The venue’s existing scoreboards will be removed.

“The media center,” says Dan Skendzel, senior associate athletic director for media and branding, “is the manifestation of University President Rev. John Jenkins CSC and VP/Athletic Director Jack Swarbrick’s vision when they approved the launch of Fighting Irish Media: get started in athletics but always with the intent of scaling capability to support the university’s academic and faith missions.”

The media center will house two control rooms to support live productions for ACC Network Extra and NBC digital shows as well as live linear-television broadcasts. Two additional studio spaces, six edit rooms, and two audio rooms will also be brought online. Existing FIM facilities of two edit rooms, three control rooms, and one studio will be folded into a new IP-centric infrastructure. All venues —academic, athletic, and faith — will be connected via single-mode fiber to the media center.

IP Workflow Is Envisioned From the Start

“They were looking [to build] a state-of the art facility that supports sports, academics, and faith-based initiatives, but they also were looking at technologies and tools that would lead them into the next millennium,” says Fred Wright, senior director of sales, central region, BeckTV. “An IP-centric environment is very important [to them]. They were looking for a system integrator to come on board early enough in the project to help engineer and design solutions conducive to this IP workflow.”

Although specific technology decisions have yet to be solidified, Rinehart and the Notre Dame Studio team are committed to installing an IP core, selecting as many IP-based products as they can, and leveraging IP technology beyond the South Bend campus.

“When you put in a router, you’re looking at a 15-year or so decision. 15 years out [from 2017] is 2032, and 2032 — from a technology standpoint — feels like a couple of centuries of time. As fast as things are turning over these days, that’s a really scary proposition,” Rinehart explains. “That’s one of the big fears, but BeckTV is helping us think through all of these decisions, weighing the pros and cons of every decision that we’re making in the context of how it’s going to play in 10 or more years.”