Stadiums Test, Tweak Systems as They Get Ready for Football

Before fans returned to football stadiums this fall, there was a lot of field practice to get stadium audio and video gear in tip-top shape for the new season. The past few weeks had production crews and technology integrators scrambling to test new content and tweak systems old and new to get ready for the ultimate competition in fan engagement.

Following the offseason’s painstaking work of washing scoreboards bulb by bulb and testing audio levels seat by seat, rigorous last-minute preparation also includes complex WiFi testing and resolution adjustments for ever larger videoboards. Now it’s game time, and everyone is hoping that the new technology works to make one of the oldest American pastimes even more thrilling for fans. 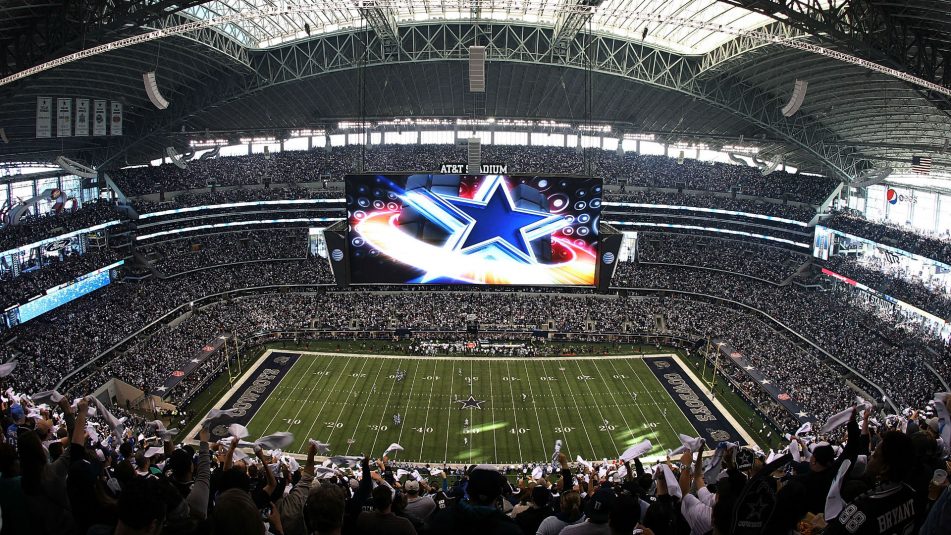 The videoboard at AT&T Stadium will run a new entrance program as the Dallas Cowboys leave the locker room.

“The last two weeks have been pretty interesting — actually, the past month — as we make sure we have the right staff to cover events not just at the new venues but also at all the existing clients we support,” observes Keith Hanak, EVP, Panasonic Enterprise Solutions. “We have a lot of folks working weekends this time of year, but, fortunately, we have a lot of folks who really enjoy being at the events and providing support. They’re fans.”

Panasonic’s preseason tune-ups begin in April, when all stadiums are inventoried and spare parts stocked for the next season. The summer months are filled with upgrades to video displays; some 50,000 sq. ft. of new displays were added this year, Hanak estimates.

And then there are the content updates, which include improvements to the video programming and resolution changes to fit new pixel counts. Several facilities boosted videoboard resolution into the HD range this year, with upgrades to smaller, 16-mm pixel pitches in such venues as the University of Wyoming’s War Memorial Stadium, Florida State’s Doak Campbell Stadium, University of Central Florida’s Bright House Networks Stadium, and Georgia Tech’s Bobby Dodd Stadium. In all cases, that meant video content had to be updated or newly created to match the new resolutions.

“Teams are always working on improving the show,” Hanak notes, adding that demands are becoming more numerous every year. “You’d be amazed at the amount of commentary related to the show that the teams receive.

He is particularly excited about a new implementation at AT&T Stadium, which will feature a dazzling new entrance program as the Dallas Cowboys exit the locker room: “Watch for that!”

A few of those updates were integrated by Alpha Video, which besides working on new builds like the Vikings’ stunning new U.S. Bank Stadium in Minneapolis, also had crews working all over the country on preseason tune-ups for clients. Those include the Green Bay Packers, which “did some pretty cool stuff on the graphics side to make what’s already a pretty visually compelling show even more engaging for their fans,” observes Jeff Volk, VP/director, sports and entertainment, Alpha Video.

Alpha Video’s preseason tune-up work includes control-room upgrades to add graphical elements to teams’ shows, as well as other traditional A/V integration tests and upgrades. But preseason tune-ups can also entail Alpha Video engineers’ being hired to do a test drive on a control room.

IPTV setup updates also are a larger part of the preseason tune-up in the multiscreen era. According to Volk, a growing quantity of unique content is being assigned much more specifically to mobile devices, club-level facilities, and individual screens in suites and elsewhere.

“At U.S. Bank Stadium, there’s not a screen-based method of communication that’s not employed,” he notes. “The driving factor is, where can I put content, ranging from what can I push to people in seats and as they walk around to how can I give a premium experience to customers in suites. It can be very, very granular to a specific device.”

Testing these extremely nuanced systems is best done when the stadium is full of people, which means either preseason games or one of a number of “soft-opening” events that new stadiums present before the main tenant’s season begins. A 2016 International Champions Cup soccer game on Aug. 3, for example, provided a first opportunity to test U.S. Bank Stadium systems under load; it was followed by two preseason games offering a chance to make fixes before the home opener this weekend, when the Vikings host the Green Bay Packers.

“For the soccer game,” Volk explains, “we used about 25% of the overall horsepower of the new U.S. Bank control room. Then we did series of dress rehearsals, using 75% of the horsepower of the control room, so the team can test what features work and what they want to change. After that, the two NFL preseason games used about 90% of the system. At that point, we weren’t so much fixing things as tweaking them a little bit. Now we’ll have the home opener with the biggest rival, Sunday football, primetime, that will use 110% of the horsepower. Hopefully, we’ve gone through and put that extra 10% in there to figuratively take the volume to 11.”

Stadium audio systems are becoming more granular, with distributed systems programmed via ever more complex networking and DSP technologies. Many venues now partner with a programmer who can make minute adjustments, either year-round or in the offseason. To get ready for Opening Day, these programmers dig into system presets and recalls, making sure that the fan experience is fully amplified.

With all the new programming added each season and new fan-engagement zones sprouting up in various stadium locations, there are always some audio levels to check.

Very high frequency (VHF) signaling technology, which is being evaluated at Broncos Stadium among other facilities, uses an inaudible high-frequency tone to trigger special offer announcements on mobile phones.

“Typically, if a stadium is commissioned and balanced well,” says Nathan Hicks, A/V design consultant, K2 Audio, “you can rely on presets and the allowed ranges of gain adjustment and have confidence [that] this is sending volume at an appropriate level to these areas. But sometimes an operator can make adjustments and change things they have no idea they’re changing.”

That’s where the granularity comes in. With audio presets targeted to specific points in a venue, there’s less likelihood of a global adjustment’s sending deafeningly loud audio blasting through certain speakers.

Preseason tune-ups for audio will likely always entail someone’s walking around with a radio to communicate trouble spots to the control room, but the influx of new fan-engagement technologies is adding new complications to the process.

In getting ready for the Denver Broncos’ new season this year, for example, Hicks was presented with the interesting challenge of accommodating an extremely high-frequency tone that would be sent through the audio system throughout game programming. Facility management was evaluating the addition of very high frequency (VHF) signaling technology, which broadcasts an inaudible high-frequency tone to be picked up by mobile phones of fans in the stadium, alerting them that a coupon or other content has been pushed to their device as they walk through a particular area.

The trouble is, even if the tone is inaudible, its extremely high-frequency can be damaging to system loudspeaker drivers. Some new amplifier models are programmed to shut off a system when a high-frequency signal is detected.

Having discovered this potential calamity during a preseason tune-up, K2 Audio is working with VHF signaling technology and the loudspeaker manufacturer to ensure that the tone, played at a low level in the mix, won’t be damaging to the speakers long-term and won’t shut the system off during games.

So all systems are go for the football season. But there’s no time to rest. Now the focus is on last-minute tune-ups to NBA and NHL venues for their season openers next month.