Fox Sports has been a pioneer in virtual reality for more than a year, working with VR-production partners to deliver live VR feeds from such events as the Bundesliga opener, U.S. Open, Big East Men’s Basketball Tournament, and the Daytona 500. However, this weekend, Fox Sports is looking to bring live VR sports into the mainstream, delivering VR and interactive 360-video mobile experiences of Saturday’s Ohio State-Oklahoma non-conference football showdown to all iOS and Android users without the need for special equipment or a pricey VR headset.

LiveLike has created a customized virtual suite as part of the Fox Sports VR experience for the Ohio State-Oklahoma game.

Fox Sports has partnered with LiveLike on the production and will present the live VR feed on its new Fox Sports VR app. With 95 million authenticated households having access to the new app on iOS and Android devices and no need for special equipment (the experience is available for cardboard headset or 360-degree mobile device in addition to Samsung’s Gear VR headset), the Ohio State-Oklahoma game is expected to be the most widely available high-profile live VR sports coverage to date.

“First, we are obviously reaching a larger audience [with this production], and we anticipate that this will give us a better sense of what the broader distribution looks like beyond just Gear VR [streaming],” says Fox Sports SVP, Digital Platforms, Devin Poolman. “The other aspect that we are learning ourselves as we go through this process is how making it available on iOS and Android devices will impact how [users experience it via] cardboard or the [360-degree-video] ‘magic window’ smartphone version without a headset.”

Users can access the live Ohio State-Oklahoma VR feed by downloading and installing the Fox Sports VR app, powered by LiveLike, and signing in with their television-provider credentials (similarly to the Fox Sports GO TV Everywhere app). The VR feed can be viewed via the interactive, 360-degree viewing experience built specifically for mobile devices or with a Gear VR or cardboard headset. In addition to the live Ohio State-Oklahoma feed, users can view a VOD version of the Mexico-Venezuela Copa America group-stage match.

Entering the suite, viewers will have an overhead wide view of the entire field.

Entering the Fox Sports VR app puts the user inside a virtual suite at the stadium outfitted with Ohio State and Oklahoma design elements. Users can watch a wide-angle view of the game from the suite or choose among four additional on-field perspectives: one at each 20-yard line and one on each goalpost. An in-stadium videoboard plays the live Fox Sports television broadcast, allowing users the opportunity to watch the synchronized telecast simultaneously with VR content.

“It’s a very fun, rich environment that should give you the feeling of actually being at a VIP suite box overlooking the stadium,” says Poolman. “From there, you can jump into different camera views on the field and navigate how you want to watch the game. We also think the virtual Jumbrotrons with the broadcast feed are important. We think it’s a great combination of experiencing what it’s like to be at the game while having some of the elements of watching the game as you would traditionally on your couch.”

Users also have an opportunity to see full rosters, schedules, and matchup stats from both teams on demand.

Inside the Production: A Quintet of Cameras, Immersive Audio on the Horizon

LiveLike and Fox Sports will deploy five Blackmagic Design URSA Mini cameras (4.6K Super35 image sensor) outfitted with panoramic lenses to capture a 180-degree view of the action on the field in front of the viewer. Since LiveLike provides the virtual-suite environment, it is not required to capture nearly 180 degrees of the stands — as is the case with many other VR productions. The five cameras will be positioned at high midfield, both 20-yard lines, and both goalposts.

LiveLike’s onsite footprint is minimal, relying on a flypack to handle signal routing, augmented-reality graphics for the virtual-suite environment, and encoding for the streaming feeds. 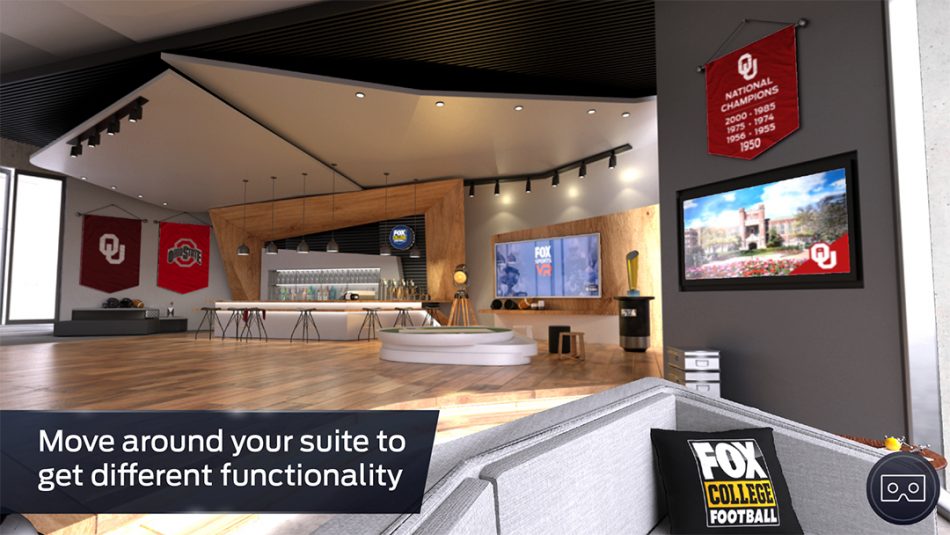 Users can navigate around the virtual suite for different functions.

“One of the things that makes VR very attainable is that you can take a huge show like this — and there are very few college-football shows that are going to be bigger than what we’re doing on Saturday — and you are able to layer in a multicamera VR shoot without much impact [on the primary production],” says Michael Davies, SVP, field and technical operations, Fox Sports. “It’s not like the days of 3D, where you had a second truck and additional camera positions and everything else. This is a fairly low-footprint operation. So we’re able to do what we need to do without needing much real estate to do it.”

Although Fox Sports is exploring the use of immersive-audio technology for future VR shows, the Ohio State-Oklahoma experience will feature the linear broadcast’s audio.

“[Immersive audio] is one thing that we’re very excited about and looking very closely at but we are going to wait to kick off until next time,” says Davies. “The [linear-broadcast] audio is going to be great, especially if you’re wearing headphones, with the game sound, commentators, and potentially a few other effects injected into the mix. But we’ve got a lot more room to grow in terms of audio. We’re testing with several companies and are looking to expand that in the future.”

VR Experience vs. 360 Mobile Experience
Although much of the focus in live sports production is on virtual reality, Poolman and company are equally excited about the potential of the 360-degree mobile-device viewing experience that does not require a VR headset.

“We have discovered that there is truly a utility in that 360 ‘magic window’ smartphone version that we didn’t expect,” says Poolman. “It offers a complementary experience to watching the game on the big screen, and it’s much more accessible [than a VR headset]. We’ve learned from a product perspective that it is a different or slightly shifted use case, and we’re very curious to see how users appreciate being able to step into VR without having to put a big headset on their face.”

Looking Ahead: More VR on the Gridiron
Ohio State-Oklahoma is just the beginning. Fox Sports and LiveLike plan to team up for multiple VR productions this college-football season. 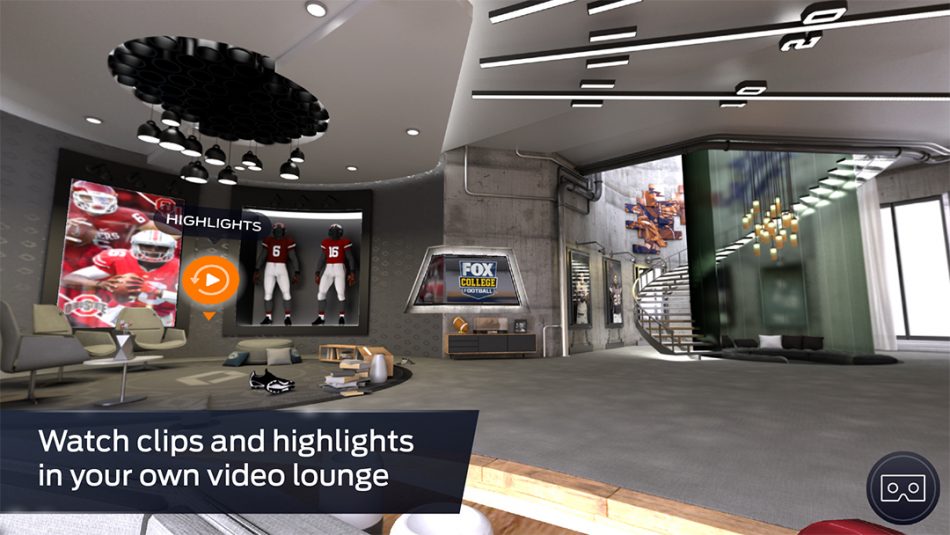 Users can watch clips and highlights in in the suite’s video lounge.

“This weekend, we’re doing some pretty seismic things that are different,” says Davies. “Having the glasses-less experience is something that we’re really interested to see how people take to and how they use. Once we understand a bit more, that will help us focus what our priorities are going to be for the next activation. We are going to see what worked and what didn’t and what we need to emphasize. So I think that success in this regard is more about education.”

In addition, the Fox Sports Lab initiative, the company’s collaborative R&D effort with its technical partners, will continue to explore the potential of VR.

“We’ll take what we learn from this execution and the next few executions and begin to create a roadmap and prioritize use cases,” Poolman explains. “At a high level, I think we all believe that there’s a real strong fit between virtual reality and sports, but we are still determining the best use cases. Is it having a headset strapped to your face focusing purely on the video experience? Is it using virtual reality to interact with the information and the data and the highlights? Or is there a real second-screen story to be told with VR complementing the big screen with a phone or tablet VR experience? There’s just a lot for us to learn here, but we’re excited about the possibilities.”