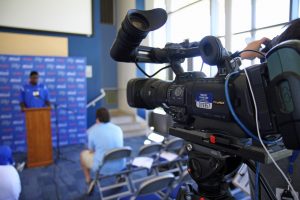 Nathan Wallach, multimedia specialist for MT Athletic Communications, is responsible for all MT Athletics video (except coach’s film) for 17 university sports. The department has been using two GY-HM850 ProHD cameras since last year, and purchased its third camera earlier this month. MT Athletics began live streaming its football post-game press conferences with the GY-HM850 in August, and is now using a GY-HM850 to stream all its press conferences.

Originally, Wallach’s live streaming workflow required him to transport and setup the department’s flypack unit, complete with a NewTek TriCaster production system, to the press room. However, the GY-HM850’s integrated support for RTMP allows the camera to stream directly to Facebook Live and SIDEARM Sports, which handles the department’s streaming services, as well as other content distribution networks (CDNs). 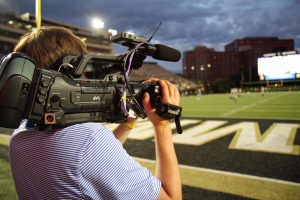 Now, Wallach connects the GY-HM850 to the university’s network via Ethernet (through an adapter plugged into the camera’s USB port) and is ready to stream press conferences to Facebook Live almost immediately. He has the school’s server information saved in the camera, so it is simply a matter of copying the Facebook Live unique session link and establishing a connection. The speedy setup means Wallach does not need to prepare for post-game press conference coverage before the game or during halftime.

“The JVC’s built-in streaming has saved me a lot of hassle,” says Wallach . “I can take the video stream straight out of the camera and there are no buffering issues. The picture quality is incredible and the audio is great. It’s been a lifesaver for press conferences.”

During football season, two JVC cameras equipped with Fujinon 20x lenses provide the footage for highlight packages and media requests. The video scoreboard at Johnny “Red” Floyd Stadium on campus is SD, so the footage from the JVC cameras is sent via fiber to the department’s control room next door in the Charles M. Murphy Athletic Center, where it is downconverted for display. The cameras also record footage locally in HD on SDHC media cards.

For road games, Wallach brings one GY-HM850 for game highlights and other footage as needed. Wallach praised the camera’s balance and shoulder-mount design, as well as its durability and versatility.

Depending on available IP support on other campuses, Wallach is hoping to stream post-game press conferences from road games as well. “Finding new ways of generating revenue is a great thing for us,” he adds, “and the JVC camera has given us the ability to do that.”