“It really is the most prestigious international team event in golf,” says Gary Treater, GM, PGA.com, Turner Sports. “Maybe one of the most exciting events in all of sport.”

He’s talking about the Ryder Cup, the good-natured war between the U.S. and Europe that takes place on the links every two years. The 2016 event begins tomorrow at the Hazeltine National Golf Club in Chaska, MN. As a partner to both the PGA of America and the European Tour, Turner Sports will deliver shots in real time to fans in their living rooms, on mobile devices, and on the course itself. 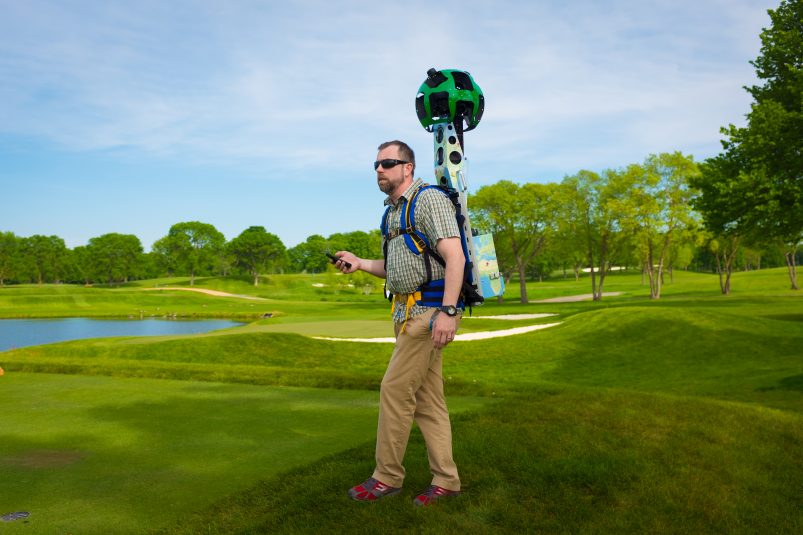 Turner has several new features planned for this event, but none is more exciting that the Hazeltine Explorer, created with the help of Google. Available through RyderCup.com and event apps, Explorer borrows Google Maps Street View technology to let fans walk the course.

“[At] Turner Sports, our leadership constantly pushes us to innovate, and there’s a culture here where there’s no fear of failing,” Treater points out. “This idea came out of a brainstorming hack-a-thon session where we [asked], What could we do to improve the fan experience at a golf event?”

The answer was to give fans the player’s perspective, so that they could experience the exact point of view that the pro was experiencing. Turner contacted Google and worked with it to bring its tracker technology to Hazeltine. In May, a team walked the course’s 200 acres outfitted with a Google Trekker camera.

“There’s over 4,000 photographs that were taken, and it provides a 360 point of view from 4,000 different places on the golf course,” Treater says. Besides just being a map, Explorer includes links to historic videos and details about famous shots that happened there. 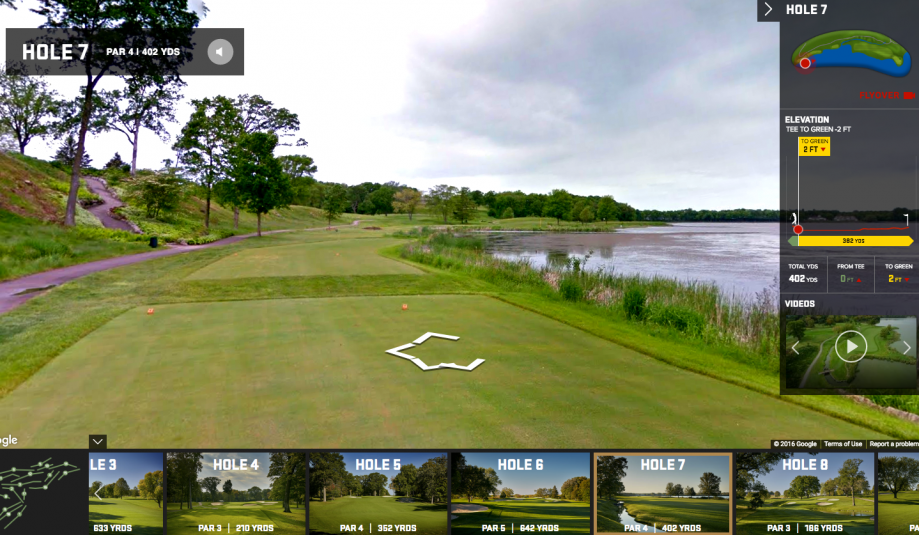 Users can navigate a hole of the course much as they would on Google Street View.

Pushing the feature a little bit further, Turner worked with Ubilabs to create Wayfinder, a mobile tool to help fans on the course get from one point to another. Anyone who has been to a championship event knows that rope barriers make moving around a challenge. Wayfinder knows the whereabouts of concession stands, restrooms, and fan experiences and will help fans get where they want to go.

For on-the-course experiences, Turner has created an all-new Roar Alert for the Ryder. It’s impossible to watch all the pros at once, so fans often hear roars in the distance but don’t know what took place. The Roar Alert solves that.

Treater explains, “We’re going to have producers embedded in all of the groups and a communication system that we’ll be able to find out what happened; get that content, whether it’s a video, a photograph, or just a text message; send it to a central location; and then very quickly send an alert out so people sitting on the 18th green can see a putt that Phil Mickelson made on 16.”

Content different from usual golf coverage will honor the unique spirit of the Ryder Cup. This isn’t the typical hushed golf championship; things can get a little rowdy, especially at the first tee. That’s why Turner is creating a first-tee stream.

An interactive map gives users a complete overview of the course.

“Friday morning about an hour before the players tee off, fans will start congregating around the first tee. Some of these fans, both U.S. and Europe, [will] be dressed like they are at a European soccer match,” Treater notes. “They’ll be chanting; they’ll be singing. It’s just a lot of theater around that. We’ve captured bits and pieces of that in the past, but, this year, we’re going to devote a whole show to it, and it’s going to be a second stream that’ll be available on RyderCup.com.”

That stream will be captured with a 180-degree panoramic camera from Pixellot. Turner has used Pixellot technology during NBA games, but this will be its first time at a PGA event.

Samsung is an official media partner of the PGA, so, Turner, as it did two years ago, will stream all of its desktop and mobile content to an exclusive Samsung connected-TV app. Samsung owners can enjoy live video, live scoring, and minute-by-minute highlights.

Working with Vizbee, Turner has created a video-casting feature for iOS apps. It lets viewers cast a video from their mobile device to a connected-TV device.

Turner will also create more than a dozen unique experiences for Facebook Live, collaborate with Snapchat for live video stories, and even shoot virtual-reality clips that will be available on-demand. And a redesigned RyderCup.com will keep the excitement going, making the event a year-round pursuit.

There will be a lot of technology at the Ryder, but, for Treater, it’s all about enhancing the fan experience.

“Our approach,” he says, “is, first and foremost, to the fan. We’re trying to deliver the best experience, whether they’re at home, at work, on the go, or at the golf course. We look at technology and innovation just as a means to an end.”