Live From the Ryder Cup: ETP, CTV Team Up on World Feed

European Tour Productions (ETP) and CTV OB have a major presence at the Ryder Cup this weekend. Both are heavily involved with creating the world feed that is the backbone of the coverage of Sky Sports UK and 47 other ETP rightsholders covering 175 territories. And it is once again a case of trans-Atlantic partnership, with both ETP and CTV working closely with NBC Sports and NEP, which is providing remote-production facilities. 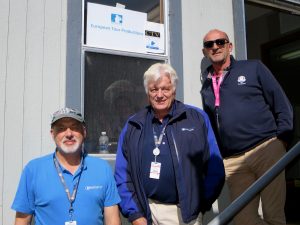 “We have a long and good relationship with NBC Sports at Ryder Cups and now the Open Championship,” says Hamish Greig, technical director, CTV OB. “Having NBC at the Open has cemented that relationship even further, as they could not be any more helpful.”

The Ryder Cup relationship between NBC Sports and ETP/CTV can best be described as one of host and guest, with the host handling all the cabling infrastructure and managing the compound.

CTV OB is calling NEP production trucks home for the event, working out of NEP ND7 (A, B, and E) and SS10B for the world feed; CTV client BBC is working out of SS23 A and B for a nightly highlights package.

“It’s a small global community,” notes Greig. “We have had a long and happy relationship with NEP, and we don’t have any issues working with them if it makes engineering and financial sense.”

Production trucks on both sides of the Atlantic tend to have some differences so the CTV and NEP teams worked closely to make sure the right facilities were used.

“In Europe, we tend to have one truck that does everything, while American trucks tend to be two, three, or four units that divide everything up, with audio next to graphics or production in the same truck as the tape area,” says Greig. “So we were looking at trucks that had the areas that would service our needs.”

For the world feed, ETP makes use of 33 of its own cabled cameras as well as nine RF feeds, a mix of Sony HDC-1500, -2500, and -4300 cameras. Of the nine RFs, two of them concentrate on matches that are finishing up and are on hand to do interviews with players and captains.

“Plus, we have 50-odd feeds from NBC and any specialty feeds from Sky and the Golf Channel,” says Greig. “So the main vision mixer has 105 camera sources and MADI audio from NBC, and we also do our own submix, have our own super-iso area, and two main audio areas.”

Audio is a major part of the event, and ETP has eight high-powered radio mics, two roving talent, and six roving FX mics on the course supplemented with effects mics on the RF cameras. Graphics are supplied by MST, which handles graphics for the ETP events, RF by Broadcast RF, and CP Communications is providing radios, IFB, and talent mics.

“We have a long-term, world-wide relationship with Broadcast RF,” adds Greig. “We have brought them to the U.S. twice.”

The ETP/CTV production and operations team numbers approximately 230 people and will leverage much of the content created by NBC (and vice versa).

“NBC has the American side covered 100%, so that naturally makes our job easier, because we know that we have great coverage of the USA side,” says Greig. “So we focus on the European side, and that results in good coverage of both teams.”

He says Friday and Saturday coverage is fairly straightforward, with only four matches played at a time. Sunday gets more challenging because there are 12 matches on the course for a large portion of the day.

“So much can be going on at one time, like [the 2012 Ryder Cup] at Medinah, when no one gave Europe a chance on the Sunday, and then they came back,” says Greig. “It makes for wonderful television.”