After Debuting for Turner at Ryder Cup, NEP’s TS2B Is Ready To Play Ball

At the Ryder Cup this past weekend, Turner Sports made the most of NEP’s new TS2B production trailer, which is designed to offer maximum flexibility to meet a wide range of ever-evolving production needs.

“We had things we have to put in from operations,” explains Chris Brown, director of technical operations, Turner Sports, “but we also wanted the flexibility to do more dotcom work and other new initiatives, [and] we need space to accommodate those as well.” 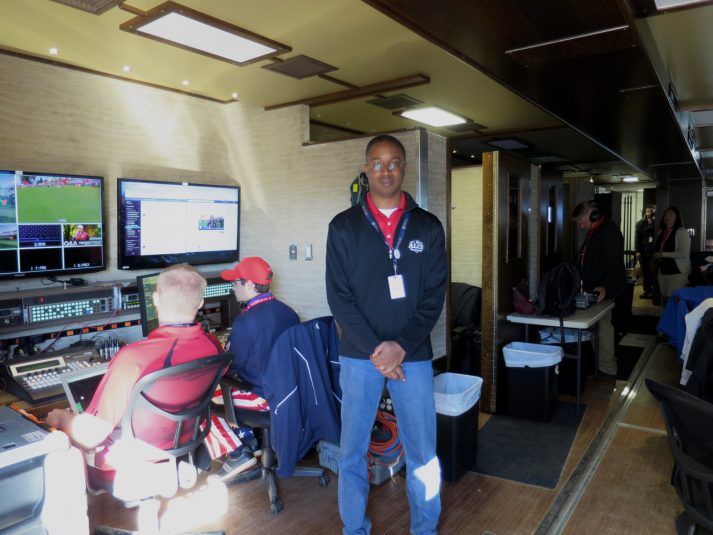 Turner Sports’ Chris Brown says the NEP TS2B unit has the flexibility needed for a new era of production.

The B unit onsite at the Ryder Cup has a twin that has been on the road for MLB coverage for 13 weeks, but the Ryder Cup was the first time Turner Sports put the new B unit to use for an event.

One of the key design aspects of the unit is that it can be used either as a straight unit when space is tight or as an expando. It also has full-size belly bays and cargo space in the back so that flight cases can be put in, secured, and wired up for a show before being shipped out again.

“The racks are big enough to accommodate the flight cases, and, when it is expanded, it gains a bench along the wall,” says Brown. “We can use that space for things like robos, super X-Mos, EVS [servers], or simply as workspace.”

And the flexibility also means it can be used as an executive trailer, allowing executives plenty of access to audio and video feeds.

“It’s a better work environment for them to do their job,” adds Brown. “They can come in, and everything is here.”

At the Ryder Cup, for example, the bench along the wall was used by the dotcom-production teams to monitor the apps and websites. The rest of the truck was configured into workspace pods, which were used for editing of features via Apple Final Cut Pro, creating the first-tee experience using Pixellot, and managing Facebook Live.

“We involved the engineers, as they have been doing shows for almost a decade and really know what the production people want,” says Brown. “It was a collaborative effort with NEP as well: they [would come] back with designs, and we [would go] back and forth. NEP hit the nail right on the head across the board.”

The unit is in use for the MLB Playoffs, handling game production for the divisional series before being used during the Championship series for robotic-camera operations, super-slow-motion replay, and communications. When the NBA seasons starts, the unit will assume its role as a more traditional B unit, handling transmission and some audio operations, such as monitoring the audio coming in from the wired coaches and players.

“It can manage any type of production, and it saves us time and shipping [because] everything is here,” says Brown. “Routing makes it an extension of the truck router, and then it has all the monitoring and communications built in. Everything else we can choose to bring in and install in purpose-built rack spaces.”