Eight years of an African-American president and the imminence of the first woman to occupy that office provides all the plausibility needed for Pitch. The drama, which debuted last month on Fox, follows the travails of Ginny Baker, the first woman — who also happens to be African-American — to play baseball in the major leagues, as a starting pitcher for the San Diego Padres.

Much of the show’s action takes place in the Padres’ Petco Park, but viewers will find their need to suspend disbelief reduced, thanks to an immersive and highly authentic soundtrack. Produced by Burbank, CA-based Smart Post Sound, it combines sound effects captured at the park with copious use of sound-effects libraries and custom Foley sounds, seasoned with plenty of judicious processing. 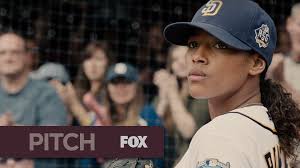 Pitch scripted series is produced with support from Fox Sports, as well as Major League Baseball.

“The sound effects come from every imaginable source,” says Rob Webber, sound supervisor on Pitch and a co-founder of Smart Post Sound. He adds that the experience took him beyond the typical television episodic series: “As a lifetime fan of Major League Baseball, the chance to work on a project like this was a dream.”

Basic sound effects, like bat cracks and the thump of a screwball hitting a catcher’s mitt, were created using the post facility’s own extensive effects library (some of which came from the effects used on Roger Maris biopic 61, for which the company also did post). Those were combined with some original effects captured at Petco Park and elsewhere. But their authenticity is largely derived from the reverbs and other ambience effects that provide additional sonic context.

“The processing is important because the ambience of the park is crucial, but we can’t use a lot of the ambient audio from the field because we don’t have the rights to the music used in the game, such as walk-on songs and what the organist plays,” he explains. “So we analyzed and re-created that ambience with algorithms.”

It goes deeper than that, however. Sound effects are often mixed in with music and dialog, so they have to be equalized to maintain their impact even as they are combined with the other audio elements. That also goes for the secondary effects, such as the swish of a bat that misses a pitch or the movement of a uniform jersey as the pitcher lets one fly. And those change with the camera perspectives and angles, says Webber. The sound effects, he adds, are as much nuance as they are obvious: the mitt-thump intensity of a young Ginny being taught to pitch by her coach father is different from the deeper thud of Padre pitcher Ginny’s screwball (the pitch her father taught her to help her compete with the more powerful fastballs of male players).

“There are a lot of layers to [the sound effects],” he says, “but it’s all about pushing the storyline forward and conveying the emotions.”

The show is on the Fox network and gets some support from its sibling sports network, including in-show appearances by Joe Buck and other Fox Sports announcers, as well as commercial-break and bumper music tracks to match the Fox Sports logos on screen, part of a package of diegetic audio that enhances the show’s realism. But the network also supplies some of the crowd sound effects heard on the show.

Webber and his crew — Co-Sound Supervisor Randy Thomas, SFX editors Erich Gann and Christopher Gomez, dialog/ADR editors Steve Grubbs and Veronica Zabrocki, Foley artists Bill Bell and Tim Chilton, rerecording mixers Dean Okrand and Brian Harman, production-sound recordist James Thornton — tweak these further, including using some library sounds that Webber recorded in a stadium at the 1996 Atlanta Olympics. Foley artists also beef them up with “walla” tracks, with some of the performers recording vendor calls of “Beer here!” and “Hot dogs! Getcher red-hots!,” which are sprinkled in during the mix.

Foley also provides effects like the sound of cleats walking from the field into the tunnel from the dugout to the locker room, as the camera follows a conversation between two characters. Webber says he’s very careful to make the transition from the wide-open white-noise–like ambient buzz of the field surrounded by a full stadium to the darker, more intimately reverberant atmosphere of the tunnel feel smooth and real, but, he adds, the sound crew has to be vigilant about the smallest details.

“We’ve gotten notes from MLB that they would never hear plastic cleats on a concrete floor — only metal cleats,” says Webber. (The show is made with MLB’s support.) “They know what everything about baseball is supposed to sound like.”

The show’s audio is done in 5.1 surround sound — Webber says it helps set up things like the direction a hit ball will take. The postproduction is done on Avid Pro Tools 10 and 11 systems and with Avid Icon or S8 consoles. iZotope RX noise-reduction software has also become an essential tool for creating the final dialog tracks, specifically in areas that require noise reduction.

Webber notes that the show’s audio has to conform to loudness standards, meeting the -24-lkfs target metric for broadcast television. But the show’s need to replicate an actual MLB environment, with screaming fans and volume surges when hits or other action takes place, is up against the need to create an intimate space where dialog and emotion can move the plot forward.

“We have only 8 to 12 dB from the quietest passage to the loudest audio we can deliver,” he says. “That’s not much, so we have to be careful. We have to watch the jump from quiet scenes to loud ones, because the [broadcast compression] could grab it and push it all back, defeating what we’re trying to build.”

The show also doesn’t have the pace of a baseball game and has to pack field action along with everything else into a little over 40 minutes. Webber wishes he could spend more time on signature baseball-sound moments, like walk-on music for hitters. But the narrative always comes first.

“Baseball has so many great stories,” he says. “I love that we get to use baseball to tell this one.”