More than 200 gather to vet future of IP sports production

SVG’s inaugural IP Production Forum brought together more than 200 sports-production professionals on Thursday to address what is perhaps the hottest — and most divisive — topic in the industry today. In an effort to cut through the noise regarding the benefits and challenges of IP production, the conference at the Westin Times Square in New York offered a full day of panels and case studies detailing the future of live production, the latest update on IP standards and protocols, how the move to IP Impacts the way engineers manage a facility, cloud‐based production, how to pick an IP router, and IP‐based cameras and switchers.

Although the theme of the Forum was the move to IP for live sports production, the overwhelming sentiment at the event was clear: SDI isn’t going anywhere anytime soon. 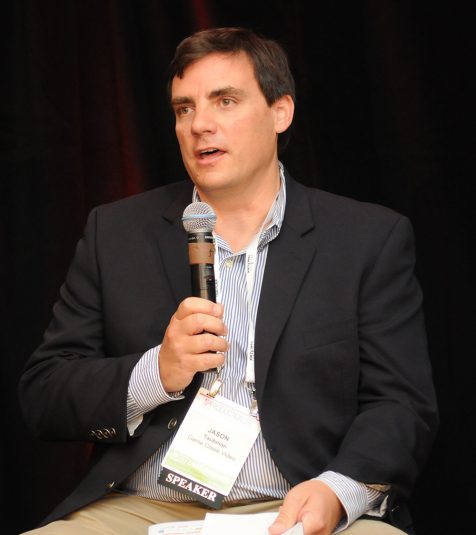 “Is SDI dead? I would say firmly no,” said Jason Taubman, VP, design and new technology, Game Creek Video, during the day’s opening panel. “Today, I would have trouble putting together an all-IP infrastructure in one of our trucks. Most of our end points are still SDI. SDI is certainly not dead, and I don’t see it going away for quite some time. We’re still dealing with analog in some cases.”

The Need To Scale Up Brings IP Solutions into the Fold

That said, the use of IP infrastructure in trucks is most definitely a reality today and is expected to grow — especially considering the exponential expansion in the size of live productions for high-profile events like the Super Bowl.

In the case of Game Creek’s Encore, Taubman and company were tasked with building a truck that could handle the massive scale of Fox Sports’ productions of the Super Bowl and U.S. Open golf. To accommodate the router-matrix size necessary for this project, Game Creek would have needed roughly eight Evertz EQX routers, which would have been impossible given space and weight constraints. As a result, the truck provider opted to build Encore around an Evertz EXE router.

“Since [Encore], we have rolled out four or five trucks with traditional baseband infrastructure, and we’re just now getting back to considering another IP infrastructure deployed in a truck,” said Taubman. “Moving forward, I think, an IP core is going to be more the rule than the exception. What’s driving that is, our RSN clients are starting to push the boundaries of the baseband core infrastructure. With no end in sight for how big it’s going to get and 4K ready to blow the doors off of it, we are looking for new ways to do what we need to do. It’s definitely coming.”

Although sports producers are intrigued by the scalability and efficiency offered by IP-based infrastructure, the learning curve for broadcast professionals remains steep.

“The move to IP gives us a lot of flexibility and a new feature set that creates efficiencies in the broadcast space, but it also comes with a steep learning curve,” said Erling Hedkvist, SVP/business development manager, NAV, Lawo. “We are now starting to learn where the pitfalls are, and there are still some pitfalls that we need to find out about. I think we are making really great progress, but we still have a way to go.”

For example, while IP presents obvious advantages for at-home–production workflows like those used by dozens of rightsholders at the Rio Olympics, it also creates unique new challenges when it comes to latency and syncing signals.

“One of the things we took for granted with SDI transport [but did not account for] when we moved to IP is the timing aspect,” said Hedkvist. “The assumption in the construction of PTP [precision-time-protocol] is that the transmit and return path have the same latency. What happens if you have an asymmetrical path with satellite going out and fiber coming back? Your PTP is not going to work. It works great in your core infrastructure at your facility, but, when you tie together your Rio island and your island in the U.S. or Europe, how does that work? You can compensate and figure out how to solve this, but, if you haven’t actually done it, then you don’t really know for sure.”

Dealing With COTS and the IT Behemoths
In years past, the promise of IP was that broadcasters would someday be able to install COTS (commercial off-the-shelf) components at the center of their facility and easily (and cheaply) build software-based workflows on top of it. However, the reality is far more complicated. 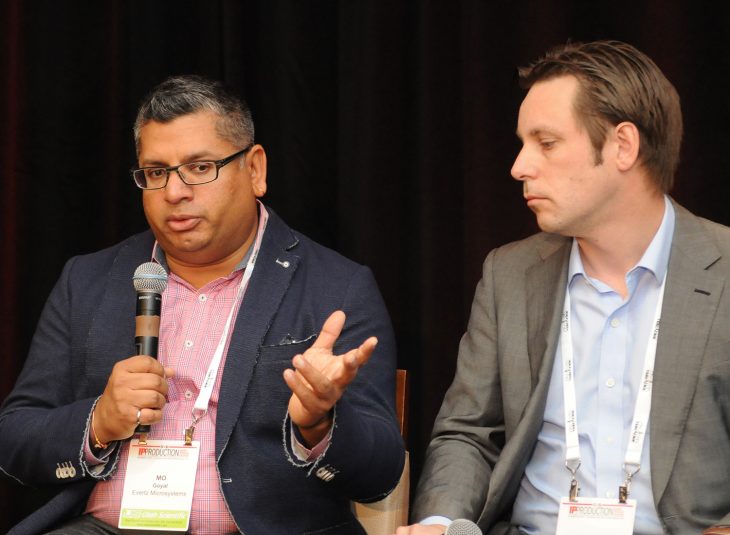 “If we could have used IT off-the-shelf switches to do the job, we would have done it years ago,” said Mo Goyal, professional engineer/director, product marketing, Evertz. “But we can’t, because the reality is that live video is a special breed with special characteristics. We as manufacturers have to leverage our knowledge [of the video industry]. How do we add value with our experience with video? We also have a lot more network engineering and software engineers, and that reflects where the industry is going.”

In addition, the manufacturers of these COTS switches are primarily multibillion-dollar organizations, for which the much smaller broadcast industry represents minimal return on investment.

“As early adopters [are finding out], some of the [COTS-switch] vendors are smaller and much more focused on our industry, but, for other vendors, our industry is a very small part,” explained David Tasker, VP, systems and technology, Snell Advanced Media (SAM). “In their thousands of employees, you have to find the small number of employees that actually understand how to get broadcast signals through a switch with broadcast quality that we have all come to expect.”

Aperi: Pure IP Production Is Here Today
Although the majority of the panelists at the Forum were of the opinion that the industry is currently in a transitional stage from baseband to IP, Aperi CEO Joop Janssen sees pure IP production as a reality today. Aperi’s platform relies on software-based real-time IP media processing in an effort to bring the flexibility and cost of the data-center model to the live-production sector. 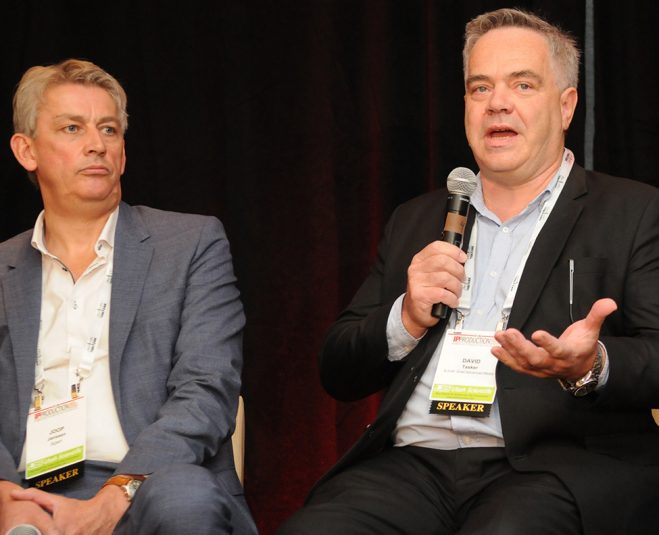 This summer, Aperi and Barco Silex demonstrated industry-first native-IP live remote production at the Germany-Italy UEFA EURO 2016 quarterfinal match. Barco Silex provided the VC-2 HQ codec IP core, which was critical to the 4K remote production from the IBC Centre in Paris Porte de Versailles to the match in Bordeaux — a distance of more than 600 km. Aperi’s native-IP platform performed all functions in real time with industry-low latency.

“Most people today are taking the SDI box that we have known for many years and putting IP connectivity around that. Aperi has done exactly the opposite,” he said. “We went with IP in the middle so that all the processing is down the middle in packets and software and the SDI baseband connectivity is on the outside. That way, you can be fully SDI in and out like a normal SDI box, but you are future-proof because you can take the SDI connectivity off with SFPs and you can ultimately have IP in, IP out.”